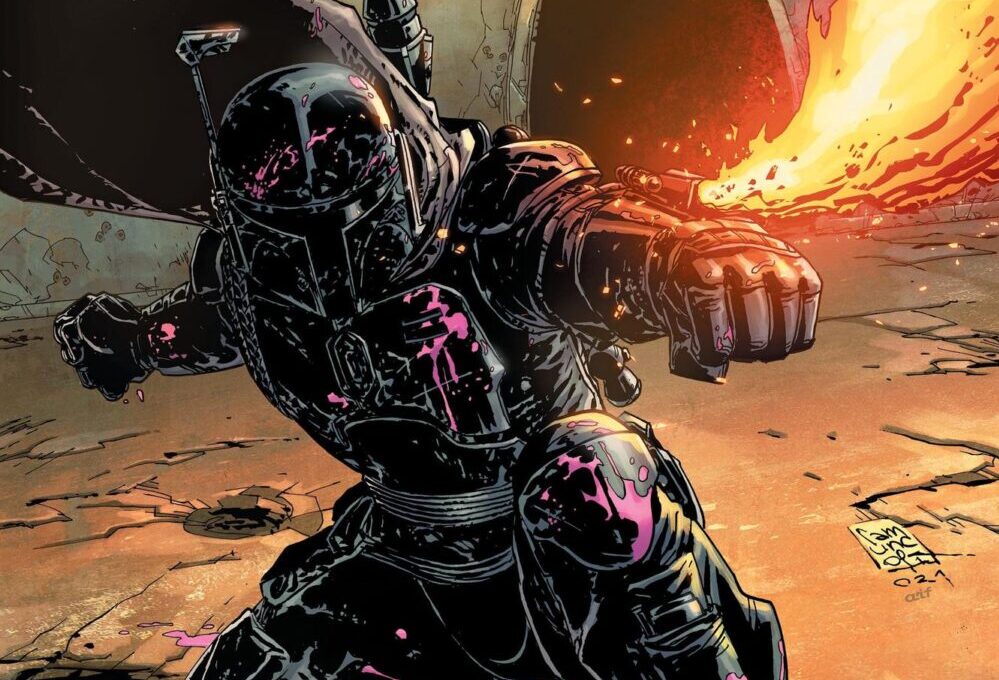 Editor’s Note: Contributor Jorgie wrote an excellent spoiler free review of Star Wars: War of the Bounty Hunters, which we published on Monday. He loved the book so much that he wrote a full spoiler review is below.

The War of the Bounty Hunters is here!

This issue is a perfect starting point for a newcomer to Star Wars comics, and for the avid readers as well. With multiple jaw-dropping moments, great contributions to Star Wars lore, killer art, and a new look for Boba Fett. This is a stellar, jam-packed issue that will leave fans giddy with excitement, and clamoring for more.

Star Wars: War of the Bounty Hunters Alpha #1 is available now at your local comic book shop! Spoilers below!

As you may recall, in the film Star Wars: Episode V – The Empire Strikes Back concludes with Boba Fett in possession of Han Solo. Boba does not immediately take Han to Jabba the Hutt, which we see in the Bounty Hunters comic by Ethan Sacks. This issue begins with Boba Fett on his way to deliver the bounty, speaking to Bib Fortuna – Jabba the Hutt’s majordomo – when the carbonite encasing Han Solo seems to have a complication. An alarm beeps and some of Han Solo’s hand is emerging from the carbonite. Boba Fett’s payment will need to wait.

The journey begins on Nar Shaddaa, where Doc Ragon reveals to us that the carbonite matrix is unstable. Doc can keep Han alive, and also offers to stabilize him so that problem won’t come up again, but first he and Boba come to an arrangement. Boba needs to kill Wyrmen Lictor, a pit warrior for the Kanji Hutts. She is their top fighter, a real moneymaker that nobody has ever beaten. Boba is reluctant to get involved, as he does not want the Kanji to have a vendetta against him; enough people do already. In order to get to her however, Boba needs to sign up for the pit fights, due to the security protecting her outside of the arena. In order to protect Boba’s identity, Doc Ragon offers to give his armor a paint job with nanospray paint he uses on patients for surgery. Boba goes to fight in the black armor we can see in the promotional art and variant covers for this issue while the doc gets to work on Solo.

Boba Fett signs up under the name Jango, and fights his way through the arena until he’s face to face with the Wrymen herself. On the first page where we see Wrymen, I was terrified for Boba because she looks like a humanoid, but attached to her back like a turtle’s shell is a huge spider, with very long legs. I did not know Star Wars had spider people. I am also not good with spiders so I was simultaneously grossed out and thought it was the coolest thing ever. I’m going to give the artists credit on that one. The character design is solid on Lictor and Boba, as are the colors. They look extremely intimidating and scary. Wyrmen Lictor can even shoot webs out of her back, stopping Boba Fett mid-air, disabling his jetpack and tossing Boba to the ground. This moment left me wondering how he could possibly kill her and survive, but The Beskar Brawler succeeds.

When Boba returns to Doc Ragon, he finds him dead, and Han Solo stolen. So begins the War of the Bounty Hunters!

The excitement just sitting down to read this issue feels similar to starting a highly anticipated movie or crossover. It feels grand in scale and I was so excited to find out how everybody gets on Boba Fett’s radar!

Boba Fett registering to fight under the name Jango poked my heartstrings, and sure enough, on the next page he has a flashback to Star Wars: Episode II – Attack of the Clones, when he held his father’s helmet after he was decapitated. Later, I remembered that in the Disney+ series, The Mandalorian, we learn that the armor he wears was Jango’s, and I got sad again.

There is a little gore in the fight scenes when Boba is competing in the pit. It works well for the tone of the story at that point, and it filled me with so much hype. The art really did solid job of making this issue feel epic, to the point where the violence and gore was extremely exciting. I never expected to shout when a Duros’ head gets chopped off, but I was cheering alongside the audience.

The flexibility of the art was on fully display, showing gritty details and colors. A great job all around. I am also head over heels over Boba’s new paint job. I want three Funko Pops! and a mug immediately. My only complaint is he doesn’t keep it very long!

Until The Mandalorian I had not cared much for Boba Fett, as he seemingly existed to just look cool and fight things, which was all he did in previous incarnations. He was finally given personality in that series, and this book continues to more fully develop his character. Charles Soule shows us how compelling Boba Fett could be in this book. Between The Book of Boba Fett series coming later this year on Disney+, and War of the Bounty Hunters, this is going to be a great year for Boba Fett fans.

I am unsure if Wyrmen Lictor’s species is a new or old design, but I’m going to nitpick here for it being too cool. She would scare the life force out of me if we saw her in live action or a video game but at the same time it’s so creative I almost want to see more.

This issue is a prelude to the War of the Bounty Hunters miniseries and not the other ongoing runs, but I was expecting some development as to how the characters from the ongoing series get involved. The rest of May we will see the other preludes to this crossover in Star Wars, Bounty Hunters, Darth Vader, and Doctor Aphra. I do not think this hurts the story of this issue, it feels like the first episode of a limited series on a streaming service which sets everything up. It had me on the edge of my seat, and the wait to learn more is going to feel like forever!

The ending of Han Solo being stolen was what I assumed was going to happen going into this, and I can understand people who would say it hurts the issue. I personally think this issue is so good because of how the story the progresses, and all the other elements mentioned above, not whether or not how Han was stolen might have been predictable. Something has to set off an event of this caliber, and this issue sets it up well. It would have been difficult to steal Han from Boba in another way. It seems like Lucasfilm and Marvel are going all out for this crossover, with over 30 issues listed on the checklist for the crossover, and I cannot wait to see what they have in store for us ahead.