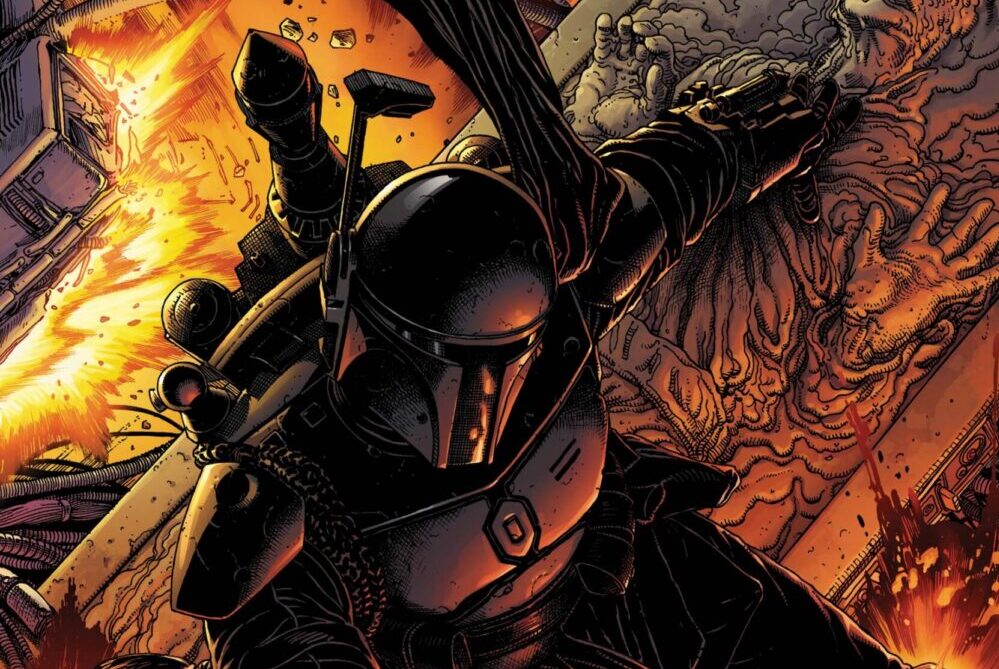 The War of the Bounty Hunters is here! Boba Fett has his precious cargo and is in for a big payday.

As you may recall, the film Star Wars: Episode V – The Empire Strikes Back concludes with Boba Fett in possession of Han Solo. Boba does not immediately take Han to Jabba the Hutt, which we see in the Bounty Hunters comic by Ethan Sacks. Without spoiling the events of that comic, Boba has an old debt to settle with fellow bounty hunter, Nakano Lash. Since that is done, he will need to make his way to Jabba’s Palace to collect the bounty that has been on Han’s head for years. With Boba not making an appearance in that comic since issue 5, we can assume he is on the way to collect, but what could go wrong on the way there?

Below is my advance non-spoiler review of Star Wars: War of the Bounty Hunters Alpha #1, available May 5th at your local comic book shop! Of course, with all reviews, there is the potential for some spoilers so please proceed with caution!

This issue is both a perfect starting point for a newcomer to Star Wars comics, and a great book for the avid readers as well. With multiple jaw-dropping moments, great contributions to Star Wars lore, killer art, and a new look for Boba Fett, this is a stellar, jam-packed issue that will leave fans giddy with excitement and clamoring for more. This event will answer the age old question of why we have a time gap in between The Empire Strikes Back and Return of the Jedi, something that has been unanswered in canon until now!

This prelude takes us to the Smuggler’s Moon of Nar Shaddaa, which is a city planet like Coruscant. The city landscapes pop out, and the moments on the ground make it feel like you’re in a large world. The character designs on this are also stellar, especially with one character in particular who I cannot wait to talk about more.

The art also suits the action well. There are some fight scenes that are a little more gory than we usually see in Star Wars comics, which is fitting with Boba Fett in the spotlight, and the art captures this perfectly. The nitty gritty nature of Nar Shaddaa is well captured with the shading and inking work done; it feels like things have wear and tear and battle damage. The art is also flexible, adjusting to the needs of the story with some pretty panels in some scenes, and more gritty in other panels when the story calls for it. Huge props to all of the artists involved in this issue. The pacing is also done really well, which is all I will mention for now.

Past this point includes discussion of what was released 5 days ago in the preview of this issue on StarWars.com. If you would like to not know, don’t worry and return once you have read the issue.

As mentioned in the introduction, Boba does not take Han to Tatooine immediately after Episode V because of the resurfacing of Nakano Lash, who had been in hiding. This comic does not explicitly remind us of the events in Bounty Hunters, which is good since it avoids potential confusion, but there are details that you might notice by reading between the lines. As we learn from the preview of this issue, the “Carbonite matrix is unstable” because there is an organic (Han) inside. This is brilliant.

One might come to the conclusion that Boba’s detour to find Lash in the Bounty Hunters arc caused this issue. In a way, that comic could be the cause of this entire crossover, which is cool since it was in March of last year when we saw Boba choose to pursue Lash over collecting the bounty right away. This is a tiny detail, a year in the making, for fans who want to dissect every little thing in Star Wars (calling myself out here), but it doesn’t hinder accessibility for fans who have not read that book. Thinking about all the setup that went into encasing Han in Carbonite without killing him (which Vader was just using as a test before he did it to Luke), it would make sense that something might go wrong during even the little time it went unattended! This is small in the grand scheme of things, but it’s why I really love the work that the Lucasfilm Story Group continuously does for fans.

It is hard to get into nitpicks with this issue without majorly spoiling it, so be sure to check back for my in-depth review, along with our giveaway on Wednesday! The only thing I felt that was really missing from this issue was a double page spread. I personally love those. With the stunning artwork in this issue, a double page spread would have made the art even more jaw-dropping. But alas: Charles Soule does it again, delivering a story that had me so speechless that I had to wait a couple days to sit down write this review.