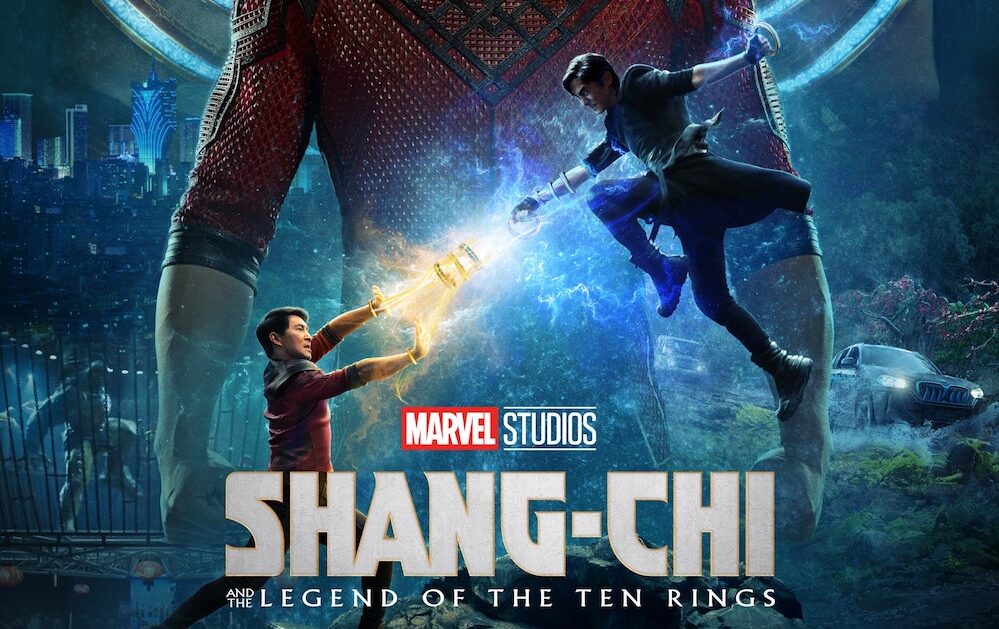 Just over one month away from the premiere of Marvel Studios’ Shang-Chi and the Legend of the Ten Rings on September 3rd, the marketing has been ramped up to a new level! Earlier this week, a new spot titled “Need” was released, which gave us some great new sneak peaks at the humor in the film as well as what is presumably the climactic battle between Simu Liu’s Shang-Chi and Tony Leung’s Wenwu aka The Mandarin.

This new poster is a nice contrast to the teaser poster released back in April. Red was the dominant color in the teaser poster, featuring Simu Liu with the Ten Rings logo behind him. This poster is predominantly blue, which is the color that seems to represent The Mandarin, and it’s nice to see the visual and color contrast that represents the core conflict of the film.

On the bottom left hand corner of the poster, we see what looks to be Abomination, who was revealed previously in the full trailer. It’s interesting that this character is so prominently featured on the poster, which could be a hint at how important Abomination is, either in this film, or going forward in the Marvel Cinematic Universe.

The city skyline just above Abomination is also interesting. We can assume that it’s the city where we’ve seen Shang-Chi participate in what looks like a Bloodsport style tournament, which also included Wong, played by Benedict Wong. I can’t help but wonder if perhaps that scene takes place in the fictional Southeast Asian city of Madripoor, which we saw introduced in the MCU in the Disney+ series The Falcon and the Winter Soldier.

The featurette provides one of the first official behind-the-scenes sneak peaks from the film and it’s great to see the film’s cast and crew work on the film. One of my favorite shots was an image of SImu Liu, Michelle Yeoh and what looks to be a collection of bo staff wielding warriors. Just behind Liu is Wushu champion Jade Xu, who also played a Black Widow in Scarlett Johansson’s recently released film.

The featurette also provides the best look yet at what might be the climactic final duel between Shang-Chi and The Mandarin. We finally see Shang-Chi wield the energy charged bo staff that we’ve seen him and others hold. With a film like this, the martial arts combat is absolutely critical and it’s exciting to see Hong Kong legend Tony Leung and Simu Liu battle it out.

Perhaps my favorite moment in the featurette is when Simu Liu speaks about the role, humorously referencing his Tweets expressing interest in the role once news of the film was released. During the conversation, Liu is wearing a “Phenomenally Asian” shirt, which is a shirt many Asian and Asian Americans have embraced to reflect pride in our community. It’s just the latest example of how important a film like Shang-Chi is when it comes to highlighting representation and diversity. I assume this is the first time that a shirt or any symbol publicly celebrating the Asian community has been so prominently featured.

Finally, director Destin Daniel Cretton makes a rare appearance, talking about his passion for this project. I’m genuinely excited for Cretton’s vision for this character and film, as he is a particularly socially conscious director whose prior films like Short Term 12 and Just Mercy are emotionally heavy and character driven stories. In the featurette, Cretton makes a simple statement – “My heart is definitely in this project. It feels in line with everything I believe in.” However, considering what we know of Cretton’s background, that statement speaks volumes about the focus of Shang-Chi.

Check out the featurette below. Shang-Chi and the Legend of the Ten Rings premieres only in theaters on September 3rd!

WITNESS THE RISE  OF A MARVEL LEGEND

IN THEATERS ON SEPTEMBER 3

Join producer Kevin Feige, stars Simu Liu and Awkwafina, and director Destin Daniel Cretton as they explore Shang-Chi’s backstory and his connection to the Ten Rings in “Destiny” a new, exciting, action-packed featurette for Marvel Studios’ “Shang-Chi and The Legend of The Ten Rings.” Also, check out the brand-new poster, available to download now.

Marvel Studios’ “Shang-Chi and The Legend of The Ten Rings” stars Simu Liu as Shang-Chi, who must confront the past he thought he left behind when he is drawn into the web of the mysterious Ten Rings organization. The film also stars Tony Leung as Wenwu, Awkwafina as Shang-Chi’s friend Katy and Michelle Yeoh as Jiang Nan, as well as Fala Chen, Meng’er Zhang, Florian Munteanu and Ronny Chieng.  “Shang-Chi and The Legend of The Ten Rings” is directed by Destin Daniel Cretton and produced by Kevin Feige and Jonathan Schwartz, with Louis D’Esposito, Victoria Alonso and Charles Newirth serving as executive producers.

Shang-Chi’s journey is told with stunning visuals, the MCU’s signature spectacle and displays of mind-blowing action, along with the talents of a diverse, stellar cast and a relatable story. Marvel Studios’ “Shang-Chi and The Legend of The Ten Rings” opens in U.S. theaters on September 3.