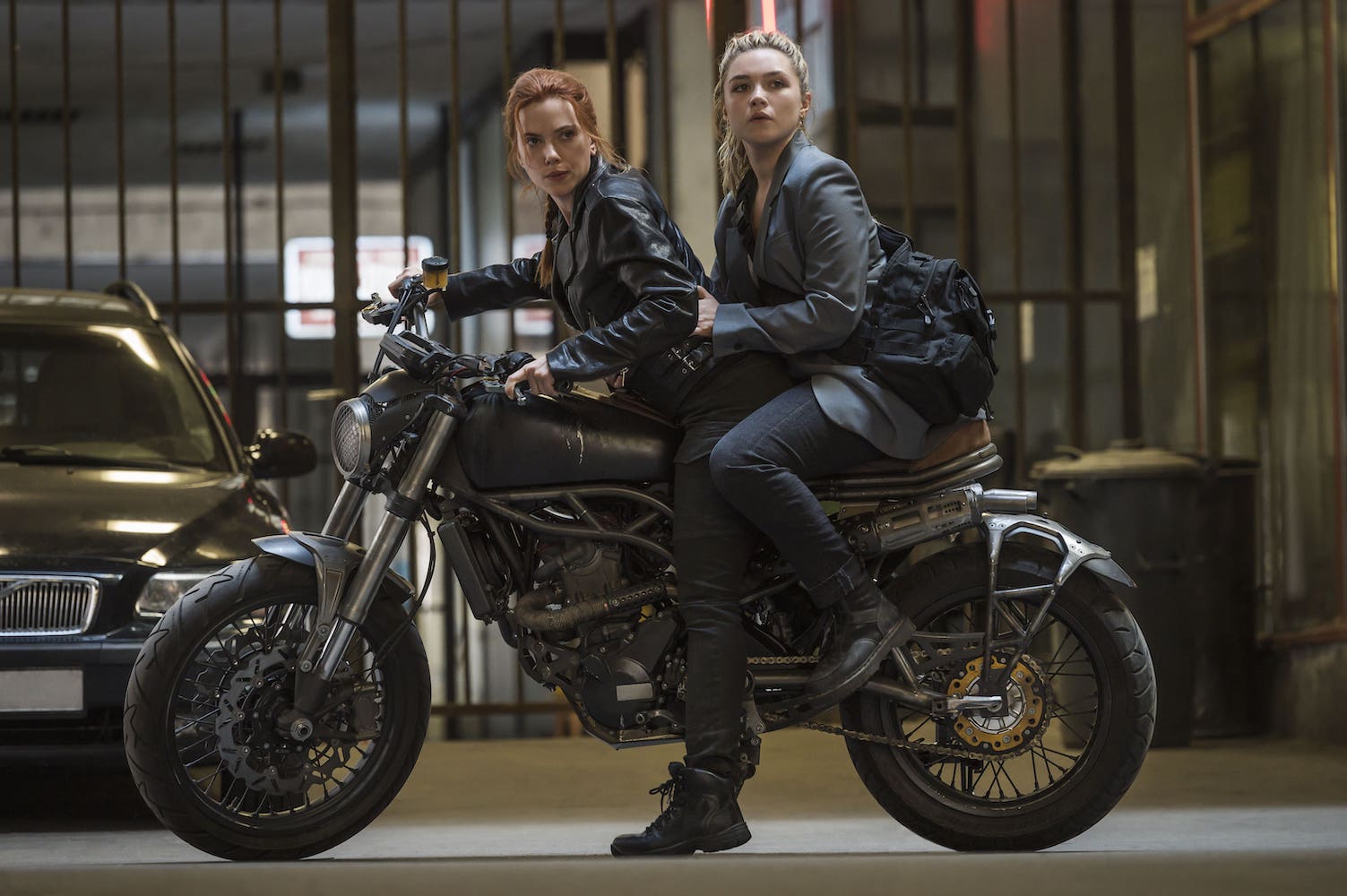 The cinematic in the Marvel Cinematic Universe returns with the long awaited premiere of Marvel Studios’ Black Widow, starring Scarlett Johansson in the role she’s come to define over the last decade. Joined by Florence Pugh, Rachel Weisz, David Harbour and O-T Fagbenle, Black Widow is an action-packed espionage thriller reminiscent of (though not quite as strong as) Captain America: The Winter Soldier.

Directed by Cate Shortland, produced by Kevin Feige, with screenplay by Eric Pearson and story by Ned Benson and WandaVision scribe Jac Schaeffer, Black Widow is a great start to Phase Four of the Marvel Cinematic Universe.

Black Widow premieres July 9th in theaters and on Disney+ Premier Access and advance tickets and orders are available now! Spoilers below!

Natasha Romanoff aka Black Widow confronts the darker parts of her ledger when a dangerous conspiracy with ties to her past arises. Pursued by a force that will stop at nothing to bring her down, Natasha must deal with her history as a spy and the broken relationships left in her wake long before she became an Avenger. Joining Johansson in the new feature film are Florence Pugh as Yelena, David Harbour as Alexei/The Red Guardian, and Rachel Weisz as Melina. “Black Widow” —the first film in Phase Four of the Marvel Cinematic Universe—is directed by Cate Shortland and produced by Kevin Feige.

Finally getting a Black Widow film in 2021, not only a over a decade after Natasha Romanoff’s first appearance in Iron Man 2, but also after prolonged delays due to the global pandemic, is a little bittersweet but also exciting. Fans of the character clamored for a solo film for years after her introduction into the MCU, and even more so after subsequent appearances in Avengers and Captain America films. It always seemed to me that a Black Widow origin story would have to be tied to Clint Barton’s Hawkeye, since the two obviously share an extensive history beyond what we’ve seen in films.

Given where the MCU stories have gone, as well as the respective story arcs of both Black Widow and Hawkeye, it felt that the time for such a story had passed. Indeed, many MCU fans wondered why we were getting a Black Widow film at all after Avengers: Endgame, which capped the first decade of Marvel Studios storytelling (followed by an epilogue of sorts in Spider-Man: Far From Home).

Fortunately, Black Widow isn’t the backstory of Natasha and Clint. And while it is a prequel, it’s also a passing of the baton and a planting of the seeds for future stories. In that way, and particularly because we had to wait much longer than expected for this film, Black Widow is a welcome start to the next era of the Marvel Cinematic Universe.

Black Widow is not subtle film. The tone is set early on, with an explosive chase scene and several sudden attack scenes that put you on the edge of your seat, and keep you there for a majority of the 2 hour and 14 minute run time. The action, combined with the stirring film score composed by Lorne Balfe (Mission: Impossible – Fallout), establish an uneasy feeling of being constantly on the run that’s perfectly appropriate for a spy thriller.

The beauty of Black Widow is that it delivers awe-inspiring action early on, and incredibly maintains a high level of intensity throughout the film. At over two hours long, that’s not an easy feat to accomplish. Throughout the film, there are numerous jaw dropping moments and impressive fight sequences. When the early trailers and previews showed the brutal fight scene between Natasha and Yelena, I wondered if it was a case of giving too much away too early. Thankfully, that fight, though still my favorite in the film, is just one of numerous crowd pleasing action moments.

With bone-crushing action and gorgeous cinematography, Black Widow is a Marvel Studios film that both enthusiasts and casual watchers can appreciate. While there are numerous references to other MCU stories, including another one of the beloved post-credit stingers, those who go into the film with no pre-existing knowledge can definitely enjoy the mostly self-contained story.

The cast is strong overall, with Scarlett Johansson leading the way and delivering the kind of solid performance that we’ve grown to expect over the last decade. My personal feelings about Johansson’s questionable casting opinions aside, she’s consistently excellent as Natasha Romanoff. The film is a great way to bring Natasha Romanoff’s story to a (presumed) conclusion, while also allowing her legacy to live on in the MCU.

Florence Pugh, Rachel Weisz and David Harbour are enjoyable as Natasha’s forced and found family. While the collective family moments didn’t land for me emotionally, their respective characters all had moments to shine.

Marvel has kept the identity of Taskmaster a closely guarded secret leading up to the film, and even with the spoiler warning above, I won’t discuss the character too deeply here. Suffice it to say that the filmmakers took the character in a bold and interesting direction and I enjoyed it. Fans of the comic character however might not be pleased.

In many ways, Black Widow feels like a spiritual sequel to Captain America: The Winter Soldier, and fans of the latter will likely enjoy this one. That’s not to say that Black Widow is necessarily as strong overall as The Winter Soldier, which many believe to be the best Marvel Studios film, but the familiarity in style and tone is a welcome one.

As much as Black Widow delivers action in spades, it falls short in the quieter, more intimate moments. The film seeks to double down on the theme that while Natasha Romanoff was robbed of a true childhood and family, she ultimately had found families in the Avengers as well as this Russian spy family. While we had the benefit of several films to see how Natasha grew to be a part of the Avengers, Black Widow has only so much time to throw her together with three brand new characters.

The foursome never feel like a true family and barely feel like friends. Alexei and Melina don’t seem like parents to Natasha or Yelena, save for a brief scene during the flashback to start the film. Instead, the characters come off more like a ragtag suicide squad joined together only by a common enemy. The dynamic makes for some awkwardly forced scenes, like one where all four suddenly decide to sit down for a family meal after not having seen each other for over two decades. Because there is limited time to establish the familial emotions, Black Widow hits you over the head with it as often as possible with mixed results. I liked all the characters. I just didn’t like when they tried so hard to convince us that they were a family.

The film also follows the MCU trend of lackluster villains who exist to do little more than provide a purpose for the heroes with the one note General Draykov. Black Widow is about Natasha, Yelena, Melina and Alexei. General Draykov gives them the reason they need to come together, but as a character, he’s a mustache twirling villain who doesn’t really inspire a second thought.

Finally, while the rest of the film can definitely be enjoyed by casual watchers, the post-credits stinger will mean very little to those who haven’t been keeping up with the latest MCU developments.

Black Widow successfully plants seeds that should lead to a substantial and necessary increase in women characters in the MCU, including several women of color characters. However, while the filmmakers clearly made it a point to have women of color visible on screen, there is a significant lack of diversity amongst the main cast.

O-T Fagbenle is the most notable actor of color in the film, and while he was given his own character poster and definitely included in the marketing, his character isn’t given much to do. Fegbenle is charismatic and likable, which makes Mason’s scenes and his dynamic with Natasha more interesting than they otherwise might have been. However, his impact on the story is minimal, and at best the hope is that this film introduces him as a character who will frequently reappear throughout the MCU.

Fagbenle is symbolic of how diversity is handled in Black Widow. It’s there. It’s visible. But it’s not at all a major part of the story and we can only hope it’s a launching pad for more of these characters in the future.