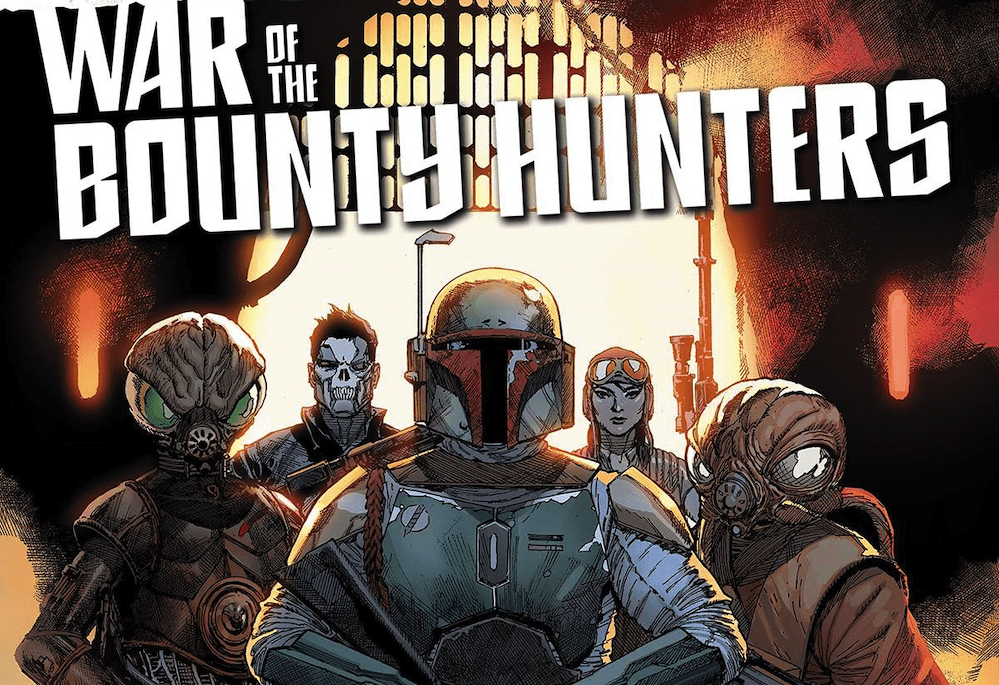 The War of the Bounty Hunters is here!

This issue is completely worthy of this statement from the synopsis: “With a last-page reveal that will blow this Death Star–sized story wide open, Issue #1 is just the beginning.” At first glance this may sound like an exaggeration but it is completely true. War of the Bounty Hunters is truly an epic story told on a galaxy wide scale, with its future hanging in the balance. If you are spoilerphobic like me, and haven’t been spoiled by Star Wars twitter already, RUN. This is a story you’ll want to experience on your own!

Marvel Comics Star Wars: War of the Bounty Hunters is available at your local comic book store. Spoilers below!

Writer: Charles Soule
Penciler: Luke Ross
Cover Artist: Leinil Francis Yu, Steve McNiven
AT WAR FOR THE GREATEST PRIZE OF ALL: HAN SOLO! THE HUNT BEGINS! Nobody. Steals. From BOBA FETT! The notorious bounty hunter will not stop until he gets what’s rightfully his. For the thief, no corner of the galaxy is safe. Good thing for them that the REBEL ALLIANCE, THE EMPIRE and every bounty hunter in the galaxy is standing in Boba’s way. With a last-page reveal that will blow this Death Star–sized story wide open, Issue #1 is just the beginning. The biggest crossover in STAR WARS history will continue raging through the pages of the WAR OF THE BOUNTY HUNTERS event miniseries and tie-in to STAR WARS, DOCTOR APHRA, DARTH VADER and BOUNTY HUNTERS through October. Only one hunter will be left standing, and the STAR WARS galaxy will never be the same!

The issue begins on a ship called The Vermillion, with a hooded figure greeting Margo and Trinia, who are in possession of Han Solo frozen in carbonite. The hooded figure remarks that Captain Solo will last long enough for their purposes, and that if Boba Fett wants Solo back, he’s welcome to try. We aren’t told who this group of people is, but fans may recognize some imagery/symbols in the background. We then go to Boba on Nar Shaddaa, where we learn a very large open bounty is on his head. We see Boba deal with two encounters right off the bat. After his second fight, Boba learns that the bounty placed on him is an open contract available to any hunter, so he goes to Jabba’s Palace to find out why.

Jabba got an invitation from the people who stole Han from Boba, to be present along with other galactic powers to witness (major spoilers from here on out) the return of Crimson Dawn.

Margo asks the hooded figure why Han is so important, to which the hooded figure states that they need the attention of the entire galaxy for “this to work”. Because Han has ties to the entire galaxy, because “they all love him, hate him, need him, owe him, or are owed by him, Han Solo unites the galaxy.” In a last page reveal, the hooded figure reveals herself to be Qi’ra last seen in Solo: A Star Wars Story. Her intentions and motivations are unclear thus far, but she offers Han to Jabba as a gesture of goodwill.

I was hoping she would appear in this event, but I did not expect that Lucasfilm would allow her to be the catalyst of the entire story. The reveal was extremely exciting, and I cannot wait to see how everybody reacts; I personally was doing a lot of keyboard mashing after reading it.

Prior to reading this issue, I was interested to see how all the characters get involved with this, and if the setup would justify a five-series crossover. It certainly is. Marvel and Lucasfilm are really going all out with this 34 issue crossover.

The art by Luke Ross makes Nar Shaddaa’s fight scenes feel so intimate yet insignificant in scale surrounded by an epic cityscape that feels massive.

Boba’s encounter with Zuckuss & 4-LOM is really fun because at first he’s like, “Okay, why are we fighting? We’ve got no beef.” Upon finding out that they are inside his ship to inspect it, he is deeply offended by the DISRESPECT and is immediately ready to spill blood.

At Jabba’s Palace there’s a moment where Boba tells all the mercenaries present that they would die if they fought him, and they let him roam free. It truly shows how well known Boba is; how feared he is. Only five issues in – counting the preludes – I’m reminded of Charles Soule’s StarWars.com interview where he says: “War of the Bounty Hunters is a story about Boba Fett doing his thing, but it builds into something much bigger, and that’s what the best comic crossovers and big stories do. They tell a great story in and of themselves, but they’re also the start of something, and they open a lot of new doors. And this story will absolutely do that.”

It is too early to know what exactly will come out of all this, but maybe this will lead us to more Qi’ra content, or set up some things from the upcoming series, The Book of Boba Fett. After Cobb Vanth’s inclusion in The Mandalorian, and as more of these ongoing projects are being developed synchronously, I really think anything it’s possible where the Lucasfilm story group is involved.

When Qi’ra talks about Han uniting the galaxy, there’s a double page spread showing the characters from the other series and their current whereabouts, which will continue on their own series this month. Maybe those are even scenes directly from the next issues. It’s a beautiful double page spread with Han Solo’s face half on each page, the main line’s group top left, Aphra on the bottom left, and Vader top right in a shot similar to Kylo Ren looking at Starkiller base firing in The Force Awakens, and Valance and Jabba on the right side. Crimson Dawn’s logo is also on both pages. It’s a great way to get Qi’ra’s point across but also show us what everyone else is doing at that moment.

Fun fact: we’ve previously seen the bar Boba was at in this issue! The bartender and layout are the same from Star Wars (2015) issue #8, when Luke travels to the “worst looking bar around” in need of information. In that issue, the owner remarks it was his father’s. Darth Maul also travels there in his 2017 series, where we see a the bartender and his father; at the time we saw him as a younger boy working, and he’s grown up to be the guy we see in this issue! It’s a small but cool detail and I immediately recognized him because of the character design!

Before the Crimson Dawn reveal, Jabba and other Hutts are conversing about whether this group is real. It is only a couple of pages, but it feels like it’s beating around the bush before the announcement of Crimson Dawn’s return. There’s a lot of “this person,” “this organization,” “this group,” “they were powerful in their day.” It feels a little overly mysterious, likely to get the reader to theorize who the hooded figure was. In the first few pages we partially see the logo, as well as Margo from Solo, working for Crimson Dawn at the time. It’s not a big issue nor does it detract from the story.

Jabba remarks that he thinks the person who ran Crimson Dawn (Maul) is dead, saying that the person in charge now may have killed them. The common fan theory is that Qi’ra is the reason for Maul’s being stranded on Malachor when we meet him in Star Wars: Rebels, and it’s really interesting to see that theory shared by Jabba himself! The integration of Qi’ra and Crimson Dawn into the Star Wars lore in the original trilogy is going to be very interesting since they can either flourish after, or be destroyed during, this event. Only time will tell.