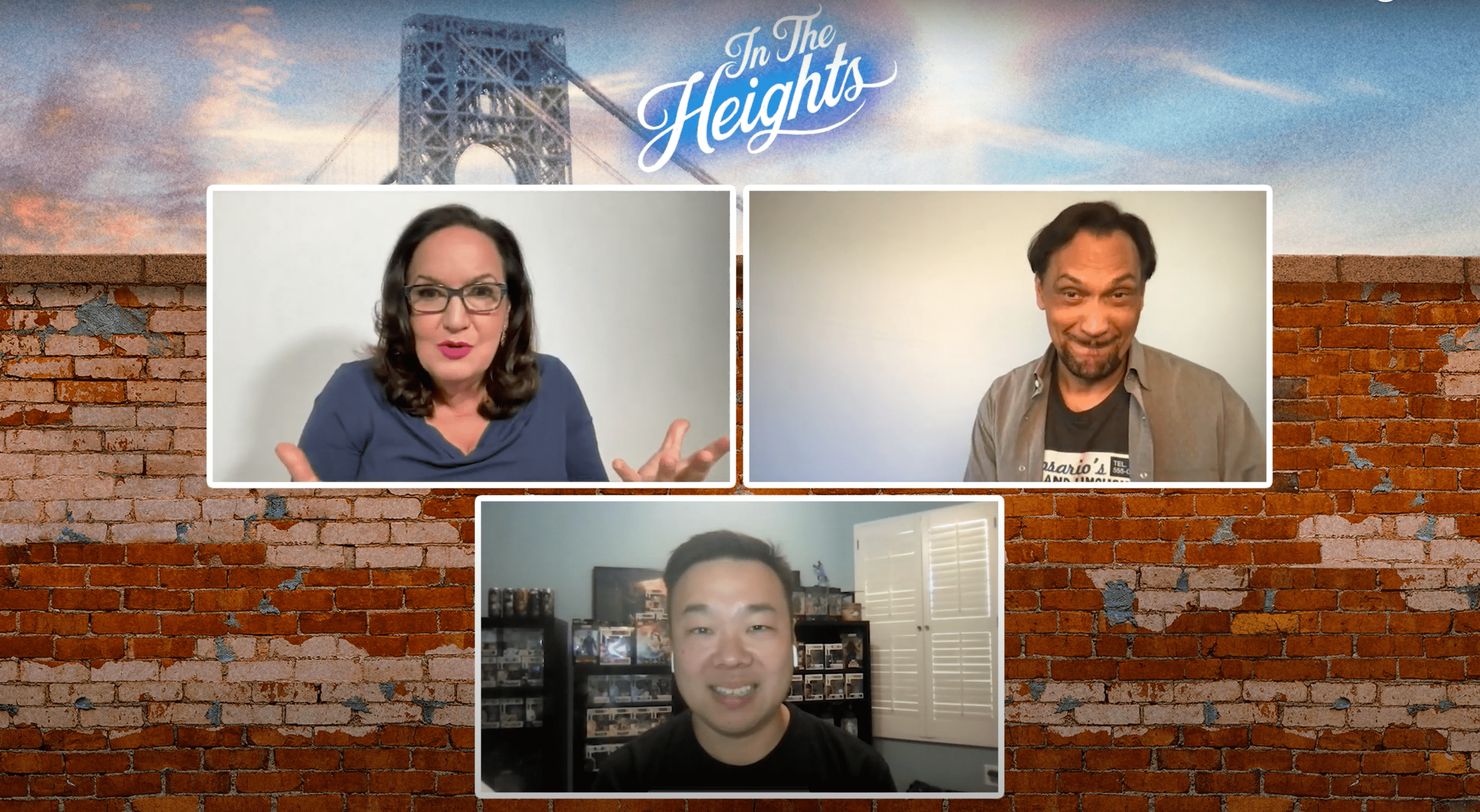 In The Heights is one of my favorite Broadway productions of all time and it’s truly exciting that the indelibly Latinx story has been adapted into a feature film by creator and producer Lin Manuel Miranda, writer Quiara Alegría Hudes and director Jon M. Chu.

In The Heights is one of those films that truly embodies the idea that representation matters. It’s the idea that this very site is founded on, and the passion and excitement that everyone involved with the film exuded was inspiring.

In The Heights from Lin Manuel Miranda and Jon M. Chu is in theaters June 10th and on HBO Max for 31 days after theatrical release.

Check out my interview with director Jon M. Chu as well!

It was such an honor to speak with the legendary Jimmy Smits, fresh off his well deserved honor of getting a star on the Hollywood Walk of Fame, and Olga Merediz, who played Abuela Claudia in the original Broadway production of In The Heights.

It’s perfectly appropriate that Smits and Merediz play characters who are essentially parental figures for the entire film, and it felt like they were parental figures for the cast as well. Having been in the entertainment industry for so many years and having blazed the trail for so many actors of color, Smits and Merediz’s pride and excitement were apparent. Both know how unique and special a project like In The Heights is and weren’t taking it for granted.

During our conversation, I asked Smits how much a film like this means to the Latinx community, and he specifically asked me to repeat, “What is your site called?” He seemed to appreciate the site name and shared the story that fellow cast member Anthony Ramos, who plays Usanvi de la Vega, would start each day of filming with an encouragement to the cast and crew, “For the culture!”

One of the wonderful elements of In The Heights is that it’s a story that features several generations in the Washington Heights community. Leslie Grace, Melissa Barrera and Gregory Diaz IV play characters that represent the next generation of the community.

Leslie Grace plays Nina, who is Kevin’s (Jimmy Smits) daughter, struggling between straying true to her roots in Washington Heights and her new college life at Stanford. Melissa Barrera plays Vanessa, who has dreams of moving and starting a career in fashion. Gregory Diaz IV plays Sonny, Usnavi’s (Anthony Ramos) cousin who just might follow Usnavi back to the Dominican Republic.

I asked all three about authenticity within the film and how much their personal stories, backgrounds and experiences informed their roles.

Daphne Rubin-Vega and Dascha Polanco play Daniela and Cuca respectively, and they are part of one of the most interesting subplots in the film. Daniela owns and operates a salon, and Cuca is one of her colleagues. They plan to move the salon to the Bronx and the subplot is a fascinating commentary on gentrification and being forced to leave “home.”

Rubin-Vega is a veteran of Broadway, best known for her role as Mimi Marquez in the musical Rent. For Polanco, who played Dayanara “Daya” Diaz on Orange is the New Black, this was her first musical role.

Lights up on Washington Heights, a world very much of its place, but universal in its experience, where the streets are made of music and little dreams become big… The scent of a cafecito caliente hangs in the air just outside of the181st Street subway stop, where a kaleidoscope of dreams rallies this vibrant and tight-knit community.  At the intersection of it all is the likeable, magnetic bodega owner Usnavi, who saves every penny from his daily grind as he hopes, imagines and sings about a better life.