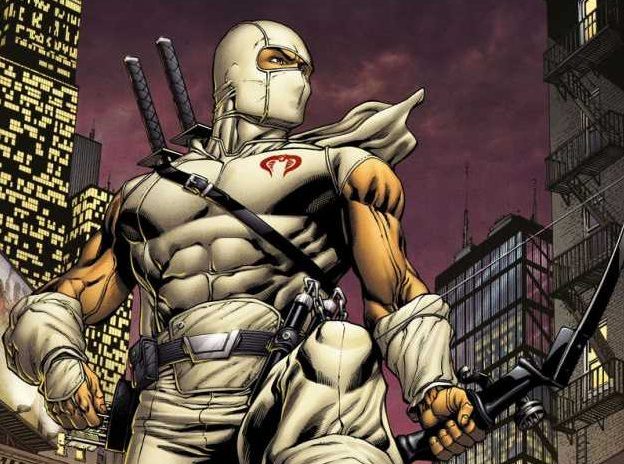 Last week we heard reports that Henry Golding from Crazy Rich Asians was cast as Snake Eyes to lead the upcoming G.I. Joe spinoff. Today, The Wrap is reporting that Andrew Koji, known for his breakout role as Ah Sahm in Cinemax’s Warrior, has been cast as Snake Eyes’ arch enemy Storm Shadow.

In the canon, the story of Snake Eyes and Storm Shadow is fairly cliched but still interesting. The two were close friends who trained together but then later had a bitter falling out, which prompted Storm Shadow to join COBRA against Snake Eyes’ G.I. Joe team. Storm Shadow, who was created by Japanese-American writer Larry Hama, is a Japanese-American character whose “real” name is Thomas S. Arashikage and in the previous films was played by South Korean actor Byung-hun Lee.

Koji, who is Japanese-British, seems like a great fit for the role. For those who watched him in Warrior (and if you haven’t you need to drop everything and do so immediately), you know that Koji plays his role with a bit of flair and even arrogance. It will be great to see him bring that kind of presence to the big screen in a villain role.

The G.I. Joe films haven’t been huge successes despite the fact that they’ve had some big names. But starting with the casting of Golding and Koji in the two primary roles is a great and somewhat unconventional way to give this franchise a much needed boost. I’ve definitely gone from completely uninterested to “I’m there opening night!” It’s also exciting to see that Koji and Golding, who were both relatively unknown before their breakout roles in predominantly Asian led projects, are getting more opportunities. It just shows how critical shows and films like Warrior and Crazy Rich Asians are to give actors of color platforms and exposure.

Robert Schwentke (“R.I.P.D.”) will direct the film and the screenplay was written by Evan Spiliotopoulos (Beauty & The Beast), The film is scheduled to be released on Oct. 16, 2020.

In the existing canon, G.I. Joe’s most famous character, Snake Eyes, is a blonde white character who was horribly disfigured after a mission which...