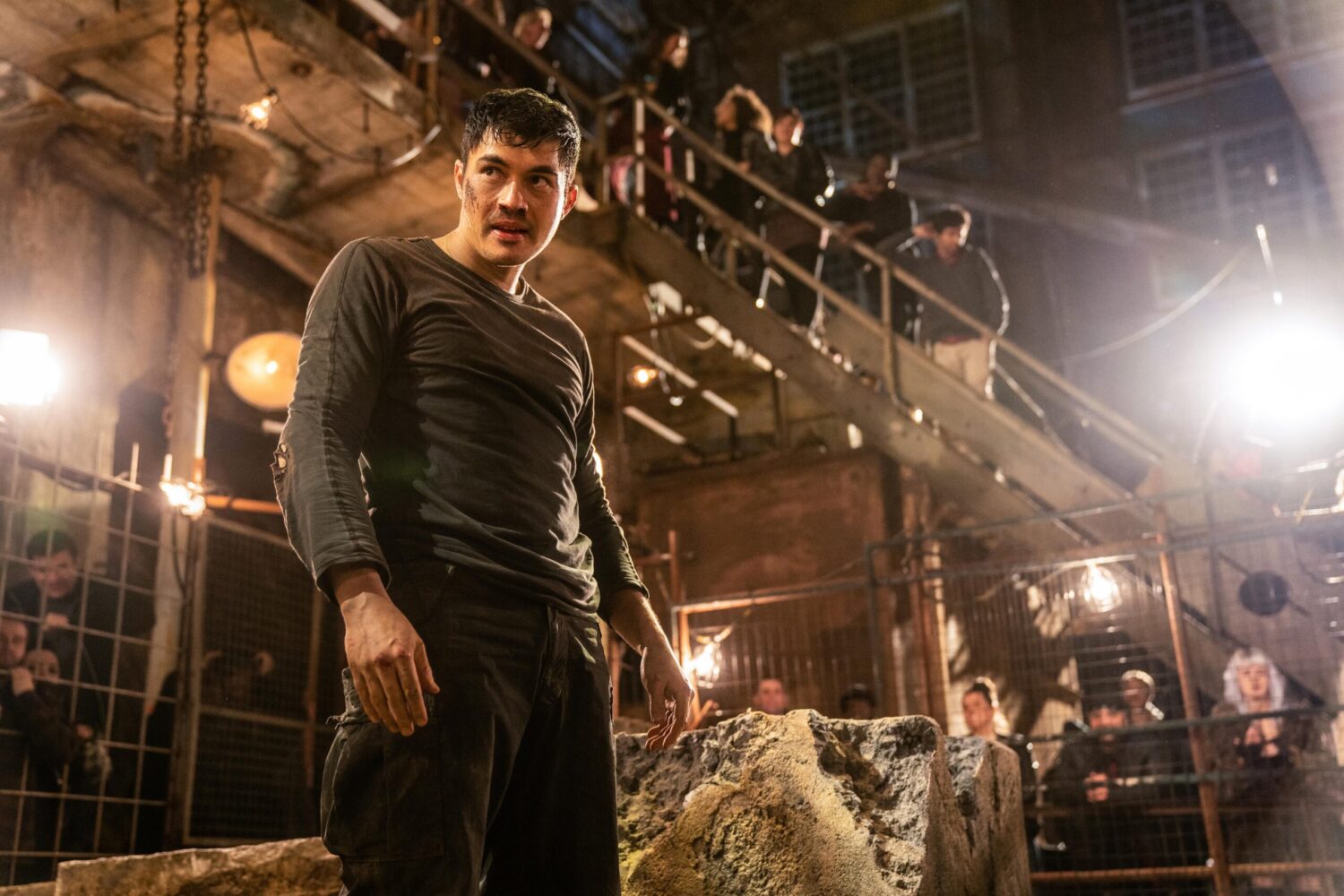 In the existing canon, G.I. Joe’s most famous character, Snake Eyes, is a blonde white character who was horribly disfigured after a mission which also rendered him unable to talk. Thus, he dons the black ninja like mask and executes his tasks in silence. And while mysterious silent types are often very popular in pop culture (looking at you Boba Fett), there comes a point when those popular characters need to be more fully fleshed out.

Paramount’s upcoming film, Snake Eyes: G.I. Joe Origins, stars Henry Golding (Crazy Rich Asians) in the titular role, and you don’t get an actor like Golding to hide his face behind a mask and prohibit him from talking for an entire film.

I had the opportunity to speak with Golding as part of a roundtable of Asian writers, and he talked about how this film will finally tell the full story of the man behind the iconic mask.

I asked Golding about who the character of Snake Eyes really is, and he mentioned that this film will tell the backstory of the character before he donned the mask.

To understand the character…we all know Snake Eyes as the finished character. We know him as the weapon, as the guy who goes in and cleans up. He does what needs to be done. He’s the business end. But who is he behind the mask? How did he get to that point? He’s an every day guy like us. He’s made bad decisions, he’s learned some very very costly mistakes…but he learned from them. He’s had his second chances, which all of us deserve. So in the beginning of the movie you see him pretty much at his lowest. And you understand why he is in that position and what motivates him to do what he does. Is it the right thing? Who knows? But for him, it’s his north star. And perhaps that north star isn’t the right thing to be aiming for. And through his journey with Storm Shadow and the Arashikage, he learns the way of being the person he should be. We tried to make the character as complex as humanly possible. We need to understand the jeopardy behind the decisions that he makes. We need to understand that he’s not just a fighting machine. He has a heart. He has a history. He has a family at the end of the day. So how did he get to the stage of putting that mask on and why? That’s why I’m so excited to revamp and start at the origin.

Henry Golding on the character of Snake Eyes

Preparing to play such an iconic role, Golding had to both study the foundations of the character, and also train for the physicality that a character like Snake Eyes demands. For the first part, having Snake Eyes creator and G.I. Joe legend Larry Hama on the project as Executive Producer was critically important.

“It was great having conversations with Larry Hama and understanding his motivations in creating these characters, creating that relationship between Snake Eyes and Storm Shadow, and why he made the decisions that he did,” Golding said. “Him acting as Executive Producer brings us the creative license to expand his history, because under his guidance, perhaps it’s what he really wanted to do in the past but wasn’t able to.”

It’s clear that with Hama involved in telling this story, Golding is confident that Snake Eyes: G.I. Joe Origins will have the creative cache to both satisfy hardcore fans, as well as appeal to a broad audience. In doing so, Golding believes that this film will be the launching point for future G.I. Joe projects. “[Hama] overseeing the project and having his say was so important to us because we wanted to do justice to the preexisting fans of course, but we also want to open this movie up to be loved by so many more people around the world,” Golding said. “And starting with the origin of Snake Eyes was so important because there are so many amazing characters that we can go to and this will set the standard for how these movies progress and series for that matter.”

Of course, a story about Snake Eyes, Storm Shadow and the Arashikage must have incredible martial arts action, and Golding noted the hard work that all of the cast members put into preparing for their roles. “What is shown in this movie is super grounded. Essentially, majority of it without special effects. All of the actors doing their own stunts. Every single choreography we had to learn and do ourselves. So it just brings this groundedness to it,” Golding said.

Golding also touted the film’s impressive cast members, which include established martial artists like Iko Uwais (The Raid) and Andrew Koji (Warrior), as well as the extensive work and preparation that everybody put into the action sequences.

We filmed the majority of this movie in Japan, so we spent so much time on the road together. Úrsula Corberó is one of the most hilarious human beings I’ve ever met. She’s phenomenal as Baroness. Someone you’ll be introduced to is Haruka Abe. She is unbelievable. She plays a brand new character, Akiko, in which we find out what her relationship in all of this is. We have Peter Mensah. Iko Uwais, Takehiro Hira is from a series called Giri/Haji from Netflix, which was amazing. Of course Andrew [Koji]. We’ve all come from very different backgrounds. We’re all very worldly, and to film together, to see the dedication that everybody put into it was unbelievable. It was a hard to task to get us to a point where we could do everything our characters needed to do. I think people are going to be really pleased and really surprised at the sequences and the universe that we’re literally kicking off with these characters. So this is the first footprint for G.I. Joe moving forward.

For Golding, this is his first major action role that comes with considerable physical demands. Taking on such a physically demanding role, Golding referenced how much he appreciated working with Iko Uwais, who is an Indonesian martial arts legend. “Iko is phenomenal. It was definitely my first foray into action. I’ve done some recreational martial arts, a bit of Muay Thai, a bit of boxing, so having a foundation really really helped. And especially the intensity in which we did our training. You learn really really quickly,” Golding said.

As noted above, Snake Eyes is possibly the G.I. Joe franchise’s most recognizable and popular character. However, the character’s origins fall into that all too common trope of a white character learning from, and adopting, the ways of “exotic Asians.” This film is the first time that problematic backstory will be corrected by having Snake Eyes be an Asian character.

Golding noted the powerful impact this change, and the film as a whole with a majority Asian cast, could have when it comes to representation in media and how important it is for viewers to see Asian heroes on screen:

I think the role itself…the entire cast is phenomenal. We have the whole gambit of around the world Asians. For me being the title role of Snake Eyes, it was a real honor….To think that once this film comes out, there’s gonna be kids out there on the playground pretending to be me, pretending to be Storm Shadow, running around with ninja stars and plastic swords, it’s so heartwarming. And for them to believe, “hey I can be the lead of a huge franchise like that,” and it be normalized.

Snake Eyes: G.I. Joe Origins stars Henry Golding as Snake Eyes, a tenacious loner who is welcomed into an ancient Japanese clan called the Arashikage after saving the life of their heir apparent. Upon arrival in Japan, the Arashikage teach Snake Eyes the ways of the ninja warrior while also providing something he’s been longing for: a home. But, when secrets from his past are revealed, Snake Eyes’ honor and allegiance will be tested – even if that means losing the trust of those closest to him. Based on the iconic G.I. Joe character, Snake Eyes: G.I. Joe Origins also stars Andrew Koji as Storm Shadow, Úrsula Corberó as The Baroness, Samara Weaving as Scarlett, Haruka Abe as Akiko, Tahehiro Hira as Kenta and Iko Uwais as Hard Master.