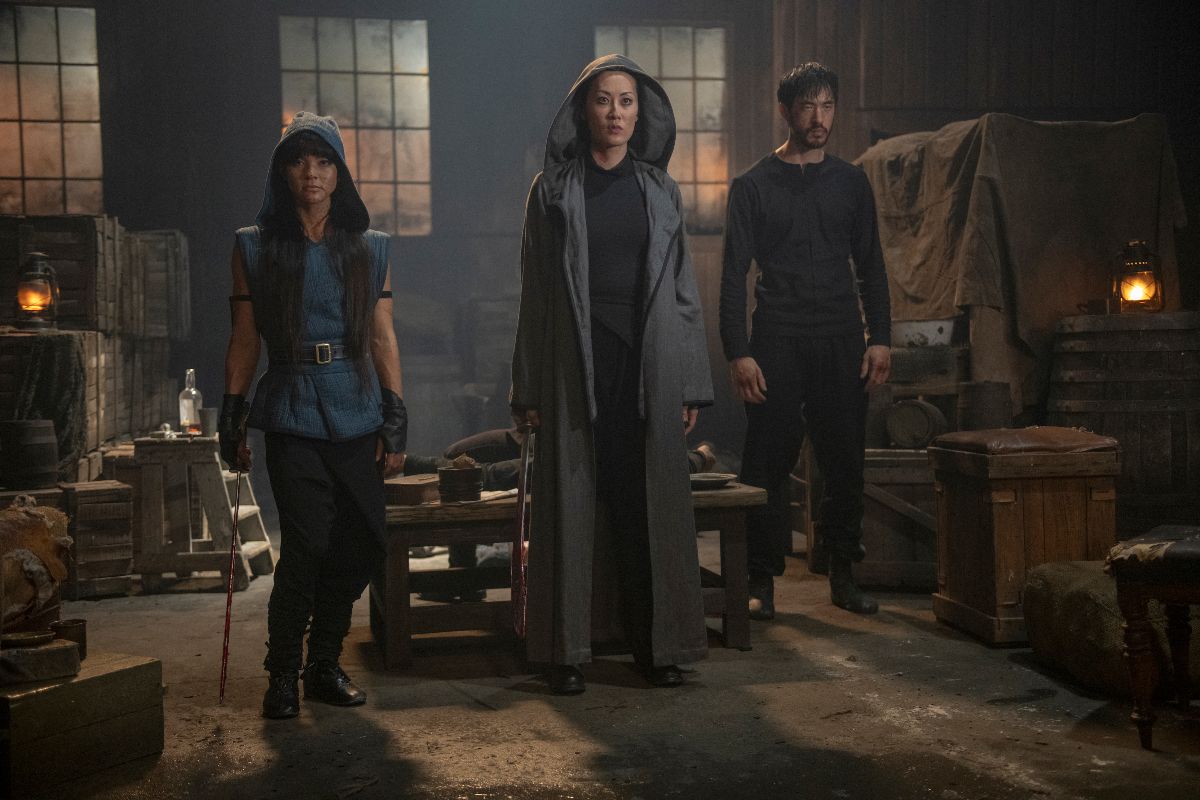 The greatest martial arts show possibly ever, Warrior, returns for its sophomore season October 2nd on Cinemax! Last month, Cinemax released a teaser and stills from the upcoming season which looked like the show was taking it to an even higher level in terms of action. Today, we finally got the news that the second season will premiere on Friday, October 2nd at 10 PM. Cinemax also revealed episode descriptions for the first 6 episodes of the 10 episode season.

This site has covered Warrior heavily since its premiere last spring. My overall review broke down the history that this show has with martial arts legend Bruce Lee and his daughter Shannon Lee. When I spoke with one of the show’s stars, Jason Tobin, who plays my favorite character Young Jun, he talked about his experience landing the role and what a dream come true it was to carry on Bruce’s legacy.

Warrior is one of the most demanding shows on TV considering the level of martial arts action. It’s reasonable to assume that after getting the first season under their belts, the entire cast is going to be even better. Beyond the physicality, I expect all of the cast to be more comfortable and familiar with their characters. It’s going to be a fantastic season and here’s hoping we see it on HBO or HBO Max in the future.

Check below for additional details and the episode descriptions. See you all October 2nd!

The series will also be available on demand and on MaxGo.com.

WARRIOR is a gritty, action-packed crime drama set during the brutal Tong Wars of San Francisco’s Chinatown in the late 19th century. The series follows Ah Sahm (Andrew Koji), a martial arts prodigy who emigrates from China to San Francisco under mysterious circumstances. After proving his worth as a fighter, Ah Sahm becomes a hatchet man for the Hop Wei, one of Chinatown’s most powerful tongs (Chinese organized crime family).

Season two follows rival Chinatown tongs, the Hop Wei and the Long Zii, as they fight for dominance amidst the growing anti-Chinese racism that threatens to destroy them all.  After barely surviving last season’s disastrous showdown, Ah Sahm is back with the Hop Wei and determined to wreak vengeance on Long Zii’s new leader, Mai Ling (Dianne Doan), who also happens to be his sister. Spending his nights honing his martial arts skills at a notorious Barbary Coast fight pit run by a savvy, opportunistic woman named Rosalita Vega (Maria Elena Laas), Ah Sahm harbors ambitions to topple Hop Wei head Father Jun (Perry Yung). To accomplish this, he pushes tong heir Young Jun (Jason Tobin) into a new opium deal and welcomes the arrival of an enthusiastic new recruit and fighter, Hong (Chen Tang).

As the two tongs fight for dominance over the course of the season, both face numerous outside threats, including from the brutal Fung Hai tong and its nihilistic leader Zing (Dustin Nyugen), the embittered Irish labor movement led by tough-as-nails bar owner Dylan Leary (Dean Jagger), and the hostile local government under the politically spineless Mayor Blake (Christian McKay) and his scheming deputy, Walter Buckley (Langley Kirkwood). With the stakes mounting and tensions with her brother growing, Mai Ling struggles to control her new-partner Zing, and lover and tong lieutenant, Li Yong (Joe Taslim).

Meanwhile, brothel madame Ah Toy (Olivia Cheng) continues to pursue her secret and violent agenda and slowly becomes intrigued by Nellie Davenport (Miranda Raison), a wealthy widow using her fortune to rescue young Chinese sex workers. Struggling to get out from the Fung Hai’s grip, debt-ridden police sergeant Bill O’Hara (Kieran Bew) faces growing suspicion from his subordinate (Tom Weston-Jones) while fixer and profiteer Wang Chao (Hoon Lee) continues to play both sides. Socialite-turned-businesswoman Penny Blake (Joanna Vanderham) works to keep her father’s factory open using Chinese labor and must adjust to the arrival of her young, rebellious sister Sophie (Celine Buckens) who begins to cross family lines in favor of the Irish labor movement. Between the local political turmoil and the escalating gang violence, tensions in Chinatown threaten to boil over into a full-scale war that will raise the stakes and its survival of the fittest for those left standing.

Episode 1: “Learn to Endure, or Hire a Bodyguard”
Debut date: FRIDAY, OCTOBER 2 (10:00-11:00 p.m. ET/PT)
Back with the Hop Wei, Ah Sahm (Andrew Koji) spends his nights at the Barbary Coast fight pit, confronting a new anti-Chinese group, Teddy’s Boys. While Ah Toy (Olivia Cheng) accuses him of just looking for another fight, an empowered Mai Ling (Dianne Doan) worries about her brother’s next steps. Meanwhile, Bill (Kieran Bew) finds it hard to break out of his role as enforcer for Zing; Penny (Joanna Vanderham) is determined to continue running Mercer Steel, much to Blake’s (Christian McKay) dismay; and Chao (Hoon Lee) offers Ah Sahm some advice for his future with Young Jun (Jason Tobin).
Written and Directed by Jonathan Tropper

Episode 5: “Not for a Drink, a F*ck, or a G**damn Prayer”
Debut date: FRIDAY, OCTOBER 30 (10:00-11:00 p.m. ET/PT)
A guilty Mai Ling (Dianne Doan) tries to make things right with Ah Sahm (Andrew Koji), who’s more intent than ever on seeking revenge. Penny (Joanna Vanderham) finds her business in trouble and learns that Ah Sahm has been using her. Leary (Dean Jagger) gets a warning and offers one of his own. Ah Toy (Olivia Cheng) pays an emotional visit to Nellie’s (Miranda Raison) Sonoma winery. Bill (Kieran Bew) and Chao (Hoon Lee) put their plot against the Fung Hai into action.
Written by Evan Endicott & Josh Stoddard; Directed by Loni Peristere