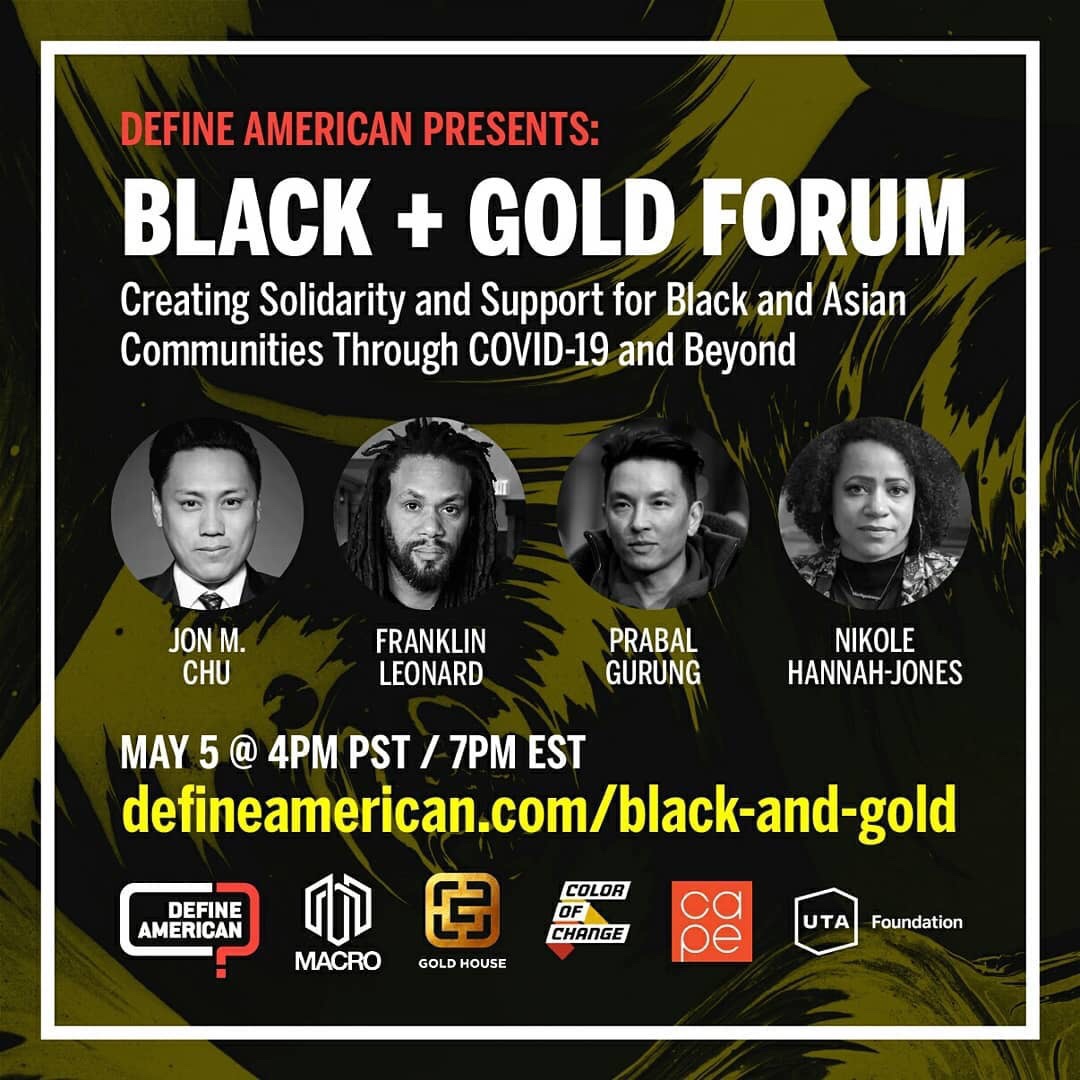 Black American and Asian American leaders from entertainment and media came together this week for the first ever Black + Gold Forum to discuss how the two communities can come together and better support one another. In what was probably my favorite event of 2020 (admittedly the the “best of 2020” competition isn’t exactly stiff), Nikole Hannah-Jones (Reporter for The New York Times Magazine and creator of The 1619 Project), Franklin Leonard (Founder and CEO of The Black List), Jon M. Chu (Director and Executive Producer of Crazy Rich Asians and In the Heights) and Prabal Gurung (Designer & Founder, Prabal Gurung, Shikshya Foundation Nepal) participated in an engaging discussion moderated by Joy-Ann Reid (Host of AM Joy on MSNBC). The event was put on by Define American and co-sponsored by MACRO, Gold House, Color Of Change, CAPE and the UTA Foundation.

Although issues like racism or unity between the Asian and Black communities can’t properly be addressed in one hour, it was inspiring and enlightening to listen to these community leaders from varied backgrounds come together and address difficult and important topics. Just the existence of an event like the Black + Gold Forum is a substantial step forward and one can only hope that this conversation will not only provide the foundation for more conversations between various communities of color, but that true coalitions can be formed that bring about substantial change.

The conversation started on the ways the Black and Asian communities have certain shared and distinct diaspora experiences, and how sometimes those experiences are intentionally pitted against each other. Nikole Hannah-Jones talked about the similar histories of discrimination and exclusion that Black and Asian Americans have faced, saying that both communities were viewed by White Americans as groups who could not be assimilated because of how we looked. She noted however, that an important distinction is that Asians chose to come to America, whereas Black Americans had no choice.

In addressing the obstacles to unity that the two communities face today, Hannah-Jones highlighted the fact that The Chinese Exclusion Act was very effective in prohibiting immigration at that time. Thus, “most Asian-Americans today immigrated after the Civil Rights Movement and don’t have a legacy of legalized racial injustice,” Hannah-Jones said. The point of course is that many Asian-Americans don’t necessarily recognize that we are enjoying the benefits of hard won civil rights battles led by the Black community, which undid racist legislation like the Chinese Exclusion Act. Hannah-Jones pointed out that the Asian model minority myth is a tool of White supremacy that “comes in direct opposition to the Civil Rights Movement,” and the idea that Asians can respond to racism by simply working harder is only even possible because the Civil Rights Movement fought to remove the legal barriers to doing that. “Anti-Blackness is part of your Americanization process,” Hannah-Jones said, “What we need to do is be able to move past the acceptance of this idea that you can ever align yourself with White supremacy…instead, align yourself with the people who have truly been fighting for all of us to be represented as Americans.”

Prabal Gurung addressed the Southeast Asian and South Asian experiences and the anti-Blackness that exists within Asian communities. He urged that Asian Americans have to acknowledge and combat that anti-Blackness. Gurung then asked the very poignant question, “Who is benefiting from the two communities fighting against each other?”

Both Gurung and Jon M. Chu talked about how they found themselves as unlikely activists. “I came here as a fashion designer and accidentally turned into an activist,” Gurung said. Similarly, Chu, who calls himself a “baby activist,” talked about the challenge of being an Asian American leader who is looked to by the community to speak out on important issues. “I made a movie that was very scary to make, and somehow it connected with people, and now they’re looking at me to speak about these topics and I don’t know how,” Chu said. “Half the reason I never made a movie about my own cultural identity crisis is because I was scared to say the wrong thing.” He then referenced his positive experience during the release of his film Crazy Rich Asians, when prominent members of the Black entertainment community like Lena Waithe and fellow panelist Franklin Leonard went out of their way to support the film by spreading awareness, buying out theaters and sending personal encouragement.

Franklin Leonard, in addressing whether there is any collaboration between Asian and Black creative projects, noted that “Jon [Chu]’s work very much exists at the intersection of the two communities.” Leonard went on to talk about the impact media has on the biases and racism between the Asian and Black communities. “Hollywood bears a great deal of responsibility for the reality that we live in where there are assumptions made about each others’ communities based on no direct experience,” Leonard said.

The conversation then turned to what the future will look like between the two communities in entertainment. Leonard highlighted the shocking fact that the list of directors for large studio films is less diverse than the Trump administration, but then expressed some optimism. Leonard emphasized that there is now a community within Hollywood that is ready to fight so that stories from all backgrounds are told. “We have to do the work to ensure that everyone gets invited to the party. When you come through the door, not only do you keep it ajar, but you studiously take the hinges off,” Leonard said. Quoting director Ava DuVernay, who is well known for promoting intersectional communities, Leonard continued, “If you can’t [open the door for others], then you go build another room and make sure there’s a table that can seat everybody.”

Leonard also dismantled the excuse made by large studios that there aren’t more Black movies because they can’t sell Black leads internationally, pointing out that audiences all over the world celebrate black musicians and athletes. He told a story about a time when he traveled to Shanghai, China to meet with Chinese filmmakers and noticed a large billboard promoting the new Apple iPhone which featured a dark-skinned Black woman. Leonard noted that it’s interesting that Apple obviously doesn’t have the same concerns about promoting Black people to international audiences. Leonard concluded that this thinly veiled excuse was actually double racism by White executives, placing the blame for racism on the Chinese. This “not only prevents Black movies from being made, but it was preventing Chinese people from seeing complicated, three-dimenational Black characters in their movies, which would ultimately change the way the Chinese community in China saw the Black people that live there and the Black people that live throughout the diaspora,” Leonard said.

For Hannah-Jones, the future of the two communities is dependent on how we respond to the current COVID-19 crisis and the racism that has come with it. “The future will be determined by what we decide to do with it…after this crisis, if we don’t decide very intentionally to create a new America, then we’re just going to go back to the old America that existed,” Hannah-Jones warned. She cited that in 2016, approximately 70% of Asian Americans voted against Trump, which was the second largest percentage within an ethnic group (Black Americans making up the largest). Hannah-Jones noted that the Obama coalition proved that “we don’t have to have the majority of White Americans to win. We need a plurality of White Americans and majority of everyone else.”

Finally, the panel concluded with an audience question put to each of the panelists – “How do you define American?”

Jon M. Chu said that he defines American as “people who believe in the dream of pursuing what they want. This country was an experiment and even though our leaders are saying that experiment is wrong, I believe in it.” Chu credited Asian American activist and screen writer William Yu for creating the #StarringJohnCho social media campaign that helped open his eyes to the prevalent bias against Asians in media.

Nikole Hannah-Jones prefaced her comments by saying that she doesn’t necessarily have a positive perspective on this topic, but defined “American” as “anyone who believes not in the inequalities that we have, but in the ideals upon which we were founded.”

Franklin Leonard pointed out that “fundamentally there’s a gap between the ideals that America purports to represent and the way in which we’ve represented them. If you believe in those ideals and live those ideals, then you’re an American.”

Prabal Gurung closed by declaring that “America is less of a country and more of an idea….It’s an appreciation and celebration of differences.”

The full panel conversation can be watched below, and additional resources provided by the Forum are as follows:

Hollywood awards season is upon us! The Golden Globes already came and went quietly this year following NBC’s decision not to air the awards...

Animation in the United States is a particularly interesting industry because it’s so heavily impacted and inspired by Asian art and culture, and yet...

HBO Max is celebrating Asian American and Pacific Islander Month this May with “See Us,” a spotlight page on its streaming service highlighting AAPI...