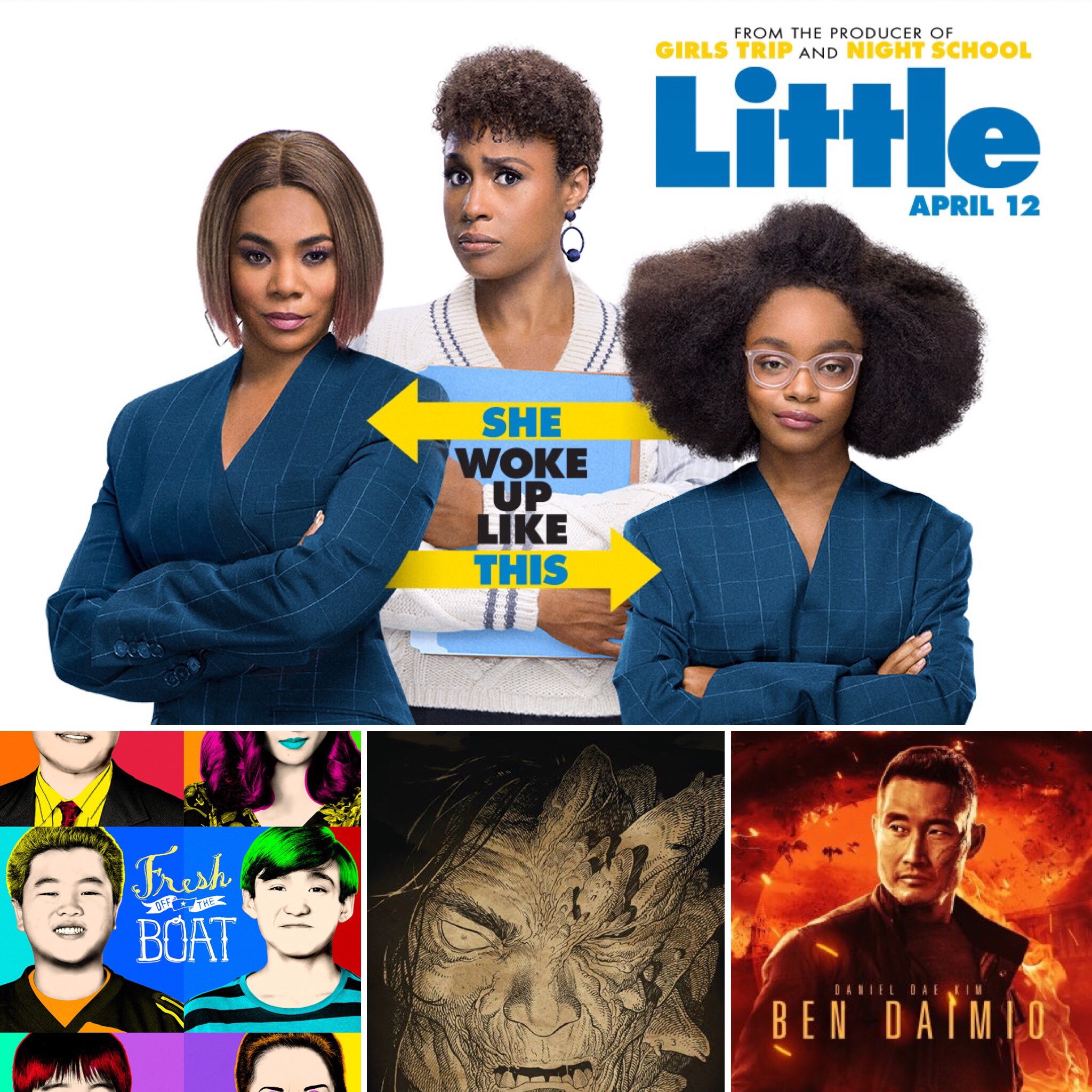 On a regular basis, I’ll highlight some of the work by diverse creators or about diverse characters that are coming soon. This is by no means an exhaustive list.  It’s simply a handful of highlights that caught my eye. Please feel free to contact me if you’re a diverse creator who would like to highlight your work (Of course I can’t promise that I will highlight every work that gets sent my way)!

This week in POC Culture:

A spin on the classic “Big” story, this film was conceived by 14 year old Black-ish star Marsai Martin, who is joined by Issa Rae and Regina Hall.  The trailer looks hilarious and I’m really excited to see Martin take this next step in her career.  She’s fantastic in Black-ish, and at only 14 years old, she has an incredible career in front of her!  You can check out the trailer here:

There’s been a lot of hand-wringing over this reboot of the 2004 franchise that adapts the classic comic series by the same name. Ron Pearlman was very popular as the titular hero, and change is always hard for fans. That kind of tribalism never made any sense to me. It’s not as if this new film erases Pearlman’s films. Of course, for our purposes, this new film is notable because the character of Major Daimio, who is Japanese-American in the comics, was originally white-washed when Ed Skrein was cast. To his credit, following vocal disapproval by many fans, Skrien stepped down from the project and was replaced by Daniel Dae Kim. On the strength of that change alone I hope that this film is a success. You can watch the trailer here:

Max Zhang reprises his role as Cheung Tin Chi from Ip Man 3 in his own Ip Man spin off featuring Michelle Yeoh and Dave Bautista. Directed by the legend, Yuen Woo-Ping, and produced by Donnie Yen, this is the first Ip Man film that doesn’t star Yen, but clearly comes with its own brand of star power. This spin off makes sense given that the Ip Man film franchise has been quite the success, but Yen will likely be done with it after the upcoming Ip Man 4. Zhang is talented and likable, and Bautista is really establishing a varied and interesting film career, but I’m most excited to see Michelle Yeoh in action. She’s incredible, and with the success of Star Trek: Discovery and her own upcoming Star Trek spin off, it’s nice to see her get the exposure in the U.S. that she deserves. You can check out the trailer here:

Fresh Off the Boat – Season finale on April 12th

The season finale of the groundbreaking show’s 5th season airs this Friday, with Eddie Huang going to Taiwan. The show, which just surpassed an incredible 100 episodes, has struggled a bit this season in the ratings since it was moved to Fridays. It hasn’t yet been renewed and I’m sure a strong season finale would help the cause significantly.

This section is unintentionally an homage to Greg Pak. The man just churns out great comics! First up, issue #2 to his fantastic new series by BOOM! Studios. I really enjoyed issue #1 and can’t wait to see this post-apocalyptic story set in 19th Century East Asia unfold.  What I love about this mini-series is that it incorporates Japanese, Chinese and Korean characters into one story. Something like that can only be juggled by an Asian writer and I’m happy that Pak gets to tell these stories.  It’s also nice to support comics beyond the “big 2”.

Marvel Comics’ new Age of Rebellion series features one-shot comics focusing on the always popular Original Trilogy timeline.  Greg Pak wrote two of those comics, one focusing on the Grand Moff himself, and the other on the greatest leader the Rebellion has ever known! It’s fun to see Pak get a chance to play in the Star Wars universe and I’m looking forward to reading both of these stories. Admittedly, my hope is that these serve as an introduction, and Pak is afforded the opportunity to delve deeper into the Galaxy Far Far Away in the near future. I’d love too see him get a crack at some new characters and timelines. For those who don’t know, Star Wars Celebration Chicago is this week and we’re about to get inundated with Star Wars fever again!

The Burial of Kojo – Now playing on Netflix

Last week The Burial of Kojo premiered on Netflix. This film, which is distributed by Ava DuVernay and her company Array, is a unique story set in Ghana, which was inspired by a newspaper article and began as a Kickstarter campaign.  Director Samuel “Blitz” Bazawule tells the story of “two brothers through the gifted eyes of a young girl who transports the audience to the beautiful lands of Ghana and other worlds that exist between life and death.”  While I haven’t yet had the opportunity to watch the film, it’s high on my list, and I appreciated this review by Robert Daniels, who calls it “a demanding and utterly brilliant debut from a visionary filmmaker.” You can watch the trailer here:

That’s it for this week! What are you looking forward to in POC Culture? Get at me on Twitter and Instagram!

Valance joins the War of the Bounty Hunters and new alliances form, as battles wage across the crossover. T’onga is close to finding Cadeliah,...