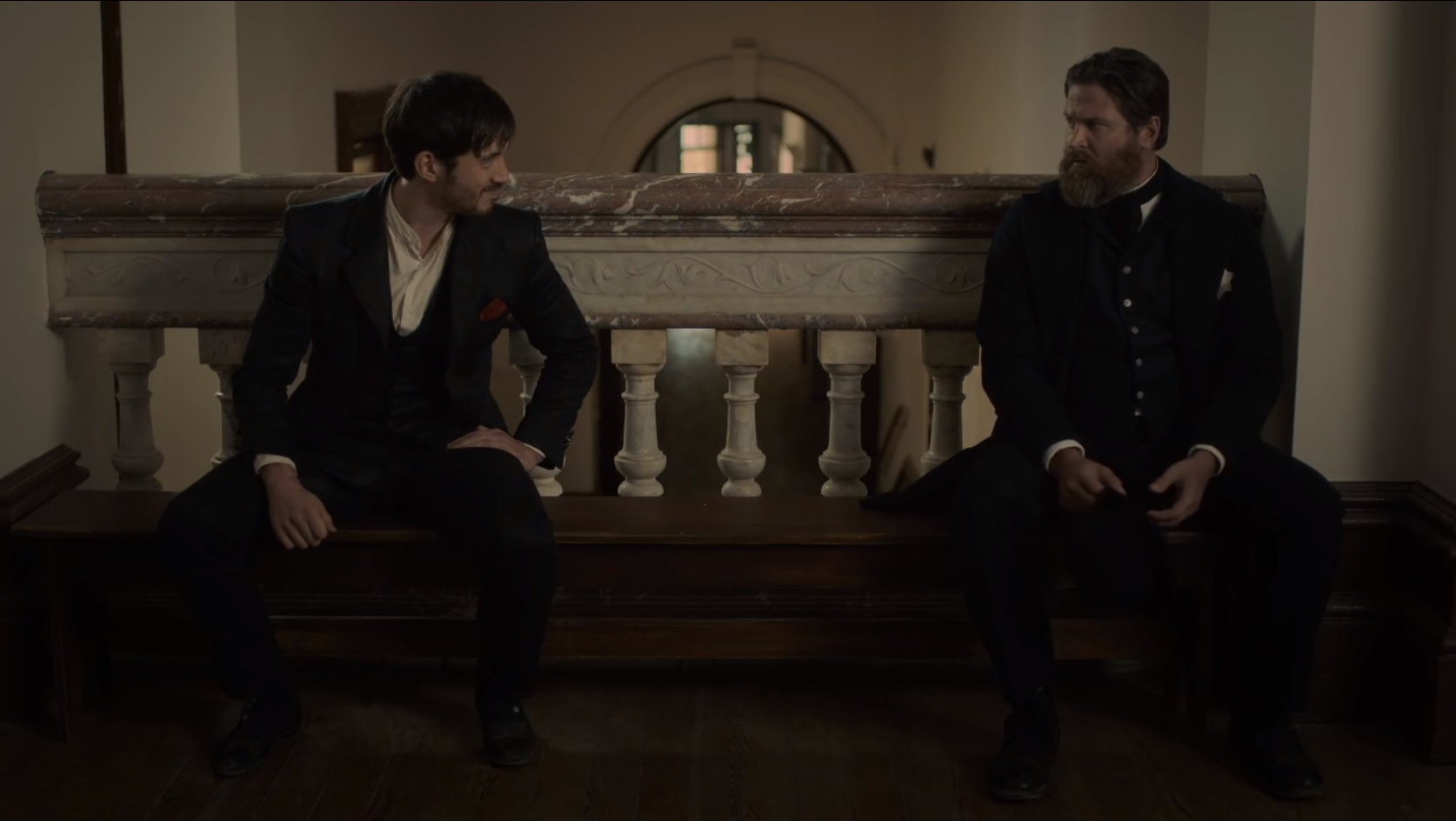 The third episode of Cinemax’s Warrior, “John Chinaman”, pushes the story forward and gives us a more clear picture of where we’re going this season. The first episode introduced all the main characters and factions. The second episode established the major conflicting motivations and themes. Here, Warrior finally gets a chance to focus on its main character, Ah Sahm (after this episode, I can’t really hear his name without having the urge to raise a glass and scream “AH SAHM!”). Spoilers below!

As this episode opens, Ah Sahm (Andrew Koji), now also known as “John Chinaman”, is in jail and being prosecuted for allegedly attacking all the white people. They even want to pin the double murder from episode 1 on Sahm. We obviously know that those killings were the deft handiwork of Ah Toy (Olivia Cheng), but the police and prosecutor need a fall guy, and any Chinese person will do.

Meanwhile, Mei Ling (Dianne Doan) is clearly established here as the true leader of the Long Zii. We’ve pretty much known that to be the case in the first two episodes, but here we see Doan make organizational decisions, give orders and make deals. Especially considering the concerns regarding how the women characters are treated in this show, it’s great to see what they’re doing with Mei Ling.

Truth be told, I had to watch this episode twice to appreciate it. The first time through, I was disappointed that we didn’t get more fighting and wasn’t particularly interested in the political machinations of the Mayor and the police. Upon my second viewing, I realized that Jonathan Tropper and the Warrior brain trust are being judicious with their fight scenes. In many martial arts focused shows and films, the storyline exists merely as a vehicle to take us from one epic fight to the next. With Warrior, the martial arts exists to support and enhance the story they’re trying to tell. Once I understood that, I was better able to appreciate the actual story.

So what’s the story? Ah Sahm (and all the Chinese) is in a white world, and is being attacked from all angles by the white characters, both figuratively and literally. Sahm faces discrimination from police, who view him as less than human; from the Irish workers, who hate him and his people for taking their jobs; and even from his own defense attorney, who says that he shouldn’t be in this country. This multi-level hate is reflected in jail, when the Irish workers’ leader, Leary, demands that Sahm be taken care of outside the courtroom. Big Bill puts three of Leary’s men in the cell with Sahm, which leads to the best fight of the episode. As if 3-on-1 isn’t enough, during the ensuing fight, we see a random inmate in the next cell over grab Sahm and try to hold him down so Leary’s goons can beat him. I had to laugh at this subtle, yet symbolic, representation of just how much everyone hates the Chinese. We don’t even see who this random inmate is; just an arm coming out of nowhere to try to hurt Sahm.

Big Bill returns to find that Sahm has put down all three goons, and Sahm reveals that he can speak English fluently, prompting Bill to say “Strange, the way you talk, if I close my eyes, you could be anyone.” Warrior isn’t big on subtlety, but I appreciate the way the show takes on these types of race issues head on.

Sahm is nicely paralleled in this episode by his sister, Mei Ling. Because Father Jun (Perry Yung) refuses to help get Sahm out of jail, Mei Ling has to intervene on his behalf. To do so, she and her enforcer, Li Yong (Joe Taslim), visit the Irish workers who intend to testify against Sahm, and make a convincing case why they shouldn’t. We get to see more Joe Taslim action as he easily lays out some of the Irishmen. Mei Ling enters and, like Sahm, speaks to them in perfect English, prompting one of the workers to ask incredulously, “How the hell are you talking to me?”

With nobody to testify against Sahm, the judge has no choice but to let him go free. This leads to a fairly hilarious exchange between Sahm and Big Bill in the courthouse where Sahm asks if Bill has three more guys waiting for him outside and an exasperated Bill shrugs and responds “It’d take more than three wouldn’t it?” I enjoyed Andrew Koji’s presence and delivery in this scene, and it’s nice to see him given a chance to do more than just kick people in the face.

As Sahm walks free, Wang Chao (Hoon Lee) is waiting for him outside. Hoon Lee is so great in this role. He oozes charisma and charm. Chao explains to Sahm that Mei Ling is responsible for setting him free and her instruction is that Sahm get out of Chinatown. But Sahm belongs to the Hop Wei and can’t simply leave. Now we really see the primary tension of this show. Sahm is beholden to his sister for his past failings and his current freedom, but in coming to the U.S. to find his sister, he pledged his loyalty to her rivals.

Sahm returns to Ah Toy’s brothel where the Hop Wei hang out. Predictably, Young Jun (Jason Tobin) is thrilled (“Welcome back m***erf***er!”) and Bolo (Rich Ting) is skeptical (“So you’re just one lucky f***ing Onion?”). While everyone is celebrating Sahm’s return, Father Jun shows up to beat some loyalty into Sahm. This scene was intense and it rang completely true that the head of the major criminal organization in Chinatown would demand loyalty in the form of a physical beating. Perry Yung shined in this scene. Cold, cruel and intense. I wish we got to see more of Father Jun and the machinations behind the Hop Wei’s presence in Chinatown. Sahm takes the beating to Father Jun’s satisfaction and now, just moments removed from having his freedom secured by Mei Ling, Sahm is fully Hop Wei.

Later, we see that both Mei Ling and Ah Toy are independently making larger plans. Mei Ling is working with Buckley, Mayor Blake’s right hand man, to bring war to Chinatown. It’s not really clear why she wants war though. What is clear is that Ah Toy has plans to strengthen her position, and wants Sahm to be a part of it. “Bar rooms and brothels are where revolutions are born” she tells Sahm.

As the episode wraps up, Sahm finds his way to the Mayor’s mansion to see Penny Blake. Here we get to see Sahm really show some swagger, and there’s clearly an illicit romance brewing between Penny and Sahm. In the final scene, Leary confronts the Irish workers who were supposed to testify against Sahm and angrily burns their house down, demanding that they leave San Francisco. Leary to this point has been little more than a one-note villain, and I can’t say I’m enjoying his character. He’s clearly being set up for a big fight with Sahm but the fact that we have to watch him stomp around and yell at people until then is a bit unsatisfying.

“John Chinaman” is an important episode in this first season of Warrior because we get a better understanding of where the story is going. Mei Ling’s Long Zii and Ah Sahm’s Hop Wei are heading for a confrontation that’s sure to culminate in a bloody war for the control of Chinatown. We also get a chance to see Ah Sahm as a complex and more well rounded character, showing his dry wit, sarcasm and swagger. I also really enjoy his friendship with Young Jun. Unfortunately, Father Jun, Bolo and Ah Toy continue to be underused. All three are great in the scenes they are given, but are mostly relegated to brief moments. I can’t help but think that all the lines and screen time given to Leary, Mayor Blake and even random Irish workers would be better served exploring the various members of the Tongs.