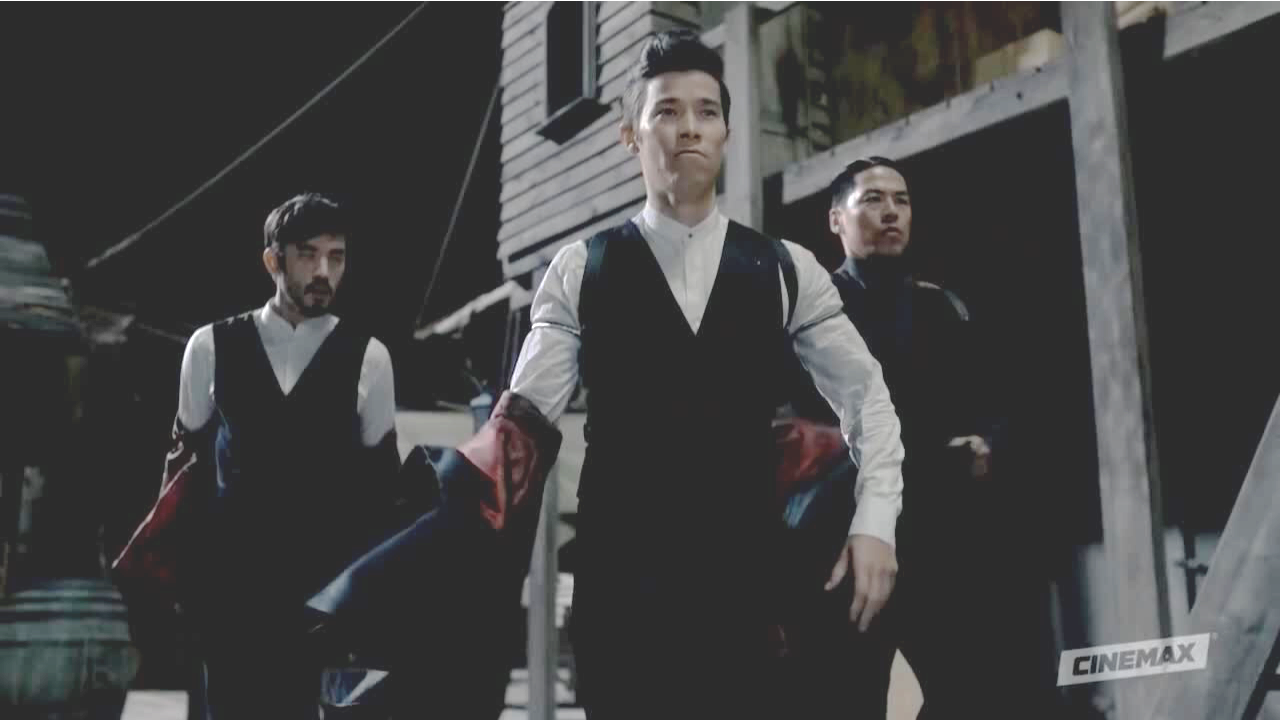 The Tong Wars are coming. If the first episode of Warrior introduced all the characters, episode 2, There’s No China in the Bible, sets up the major storylines that are likely to carry us to the Tong Wars. Spoilers below!

The episode starts with the Hop Wei essentially declaring war on the Long Zii, as Young Jun (Jason Tobin), Ah Sahm (Andrew Koji) and Bolo (Rich Ting) attack a Long Zii crew and destroy their opium shipment. There’s an amusing exchange between Sahm and Bolo, which illustrates the growing tension between the Hop Wei’s newest recruit and its menacing enforcer. I enjoyed seeing Sahm start to move beyond the stoic character we saw in the first episode and show some of his wry personality. Tobin shines again early in this episode. He plays Young Jun with a joy that leaps off the screen, and is clearly having a lot of fun.

Next we get a quick peak into the Long Zii leadership as Mai Ling (Dianne Doan) and Li Yong (Joe Taslim) are…enjoying some quality time. Notable here is that Ling is clearly the one with the power and authority over Yong.

This is a good moment to discuss how Warrior treats its women characters. Although the show is clearly strong in Asian representation, thus far the women characters introduced are either prostitutes or love interests, and they haven’t come close to passing the Bechdel test. That’s certainly concerning. I appreciate that Olivia Cheng’s Ah Toy and Dianne Doan’s Mei Ling are not weak, cleary don’t need to be saved by men, and both seem to have larger plans within the story. However, it’s true that aside from Shannon Lee, the creatives behind the show are overwhelmingly male. It’s an issue to keep tabs on as the season progresses.

Back to the Hop Wei, Jun and Sahm are making their rounds collecting payment from their Chinatown businesses. During their run, Sahm meets Penelope Blake, who is the Mayor’s wife. That ultimately leads to the second (and disappointingly last) major fight of the episode. Two “ducks” (the in-universe nickname for white people) attack Penny Blake and her “onion” manservant, Sahm intervenes, and lays the smack down. There’s a nice homage to Bruce Lee during the fight, as Sahm blocks a kick with his foot. It’s a quick, blink and you’ll miss it moment, but it’s not a common move you see on screen, and it certainly felt notable. Bruce Lee believed in utilizing every part of his body in a fight, including using his foot to block or intercept a low kick.

In the middle of the skirmish, the two officers who apparently make up the whole of the newly formed Chinatown police force, Big Bill and Lee (not the Bruce variety), get involved. Despite the fact that Lee is decked by one of the ducks, Big Bill takes out Sahm and puts him under arrest. Both Lee and Penny Blake object to the arrest, but Big Bill won’t have it. Sahm is Chinese and thus he’s at fault.

Sahm’s arrest and subsequent treatment highlight the anti Asian racism within the show, and of course reflect the actual racism in the U.S. during that time period. Sahm is registered at the police department as “John Chinaman” and he’s treated like an animal, hosed down naked to sanitize him from supposed diseases he might be carrying.

The rest of the episode is heavily focused on the various tensions and machinations between the government officials, the police and the union workers. Leary, the union leader, wants “justice” for the two workers who were killed by Ah Toy at the end of the last episode. Big Bill is trying to pin it on Sahm, the Mayor has political interests and pressures to make sure that’s handled quickly. If there’s a frustration for me in this episode, it’s that so much more time is spent on these characters and storylines than the far more interesting dynamics within and between the Hop Wei and the Long Zii. This show is about the Chinese in San Francisco during the Tong Wars. I’m not sure why we’re not delving deeper into those storylines beyond comments by characters that they’re preparing for war. Instead, Lee is positioned as the “good” cop who views everyone, even those disgusting Chinese, as people. Big Bill is a conflicted character, trying to survive while battling his own demons. I get it. But the stars of this show should be Ah Sahm, Young Jun, Ah Toy, Mei Ling and Wang Chao (Hoon Lee), and all of them warrant more screen time and material.

The episode ends with two important scenes. First Penny Blake visits Sahm in jail, where he reveals to her that he can speak perfect English because his grandfather was European. This is another great homage to Bruce Lee, whose maternal grandmother was Caucasian. Second, Chao and Toy have an engaging, but too short, discussion which highlights some of the motivations for each character. Toy isn’t given much to do this episode, which is disappointing, but we’re at least given some tease that she has much more planned.

This episode was interesting, and established various subplots for the characters. However, I was a bit disappointed with the substantial focus on characters who I think would serve the show better as background characters. Still, the opening scene alone is worth the price of admission, and it’s nice to see Sahm have an opportunity to show his personality beyond the punches and kicks. Most of us are here for the punches and kicks and this episode was light in that area. Here’s hoping for more next week!