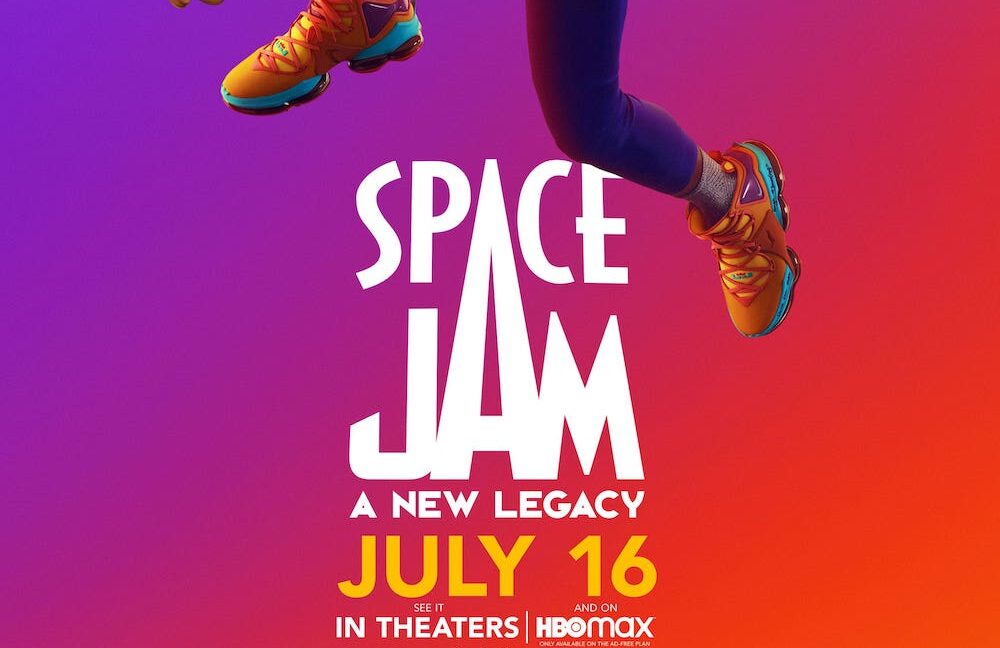 Bugs Bunny and the Looney Tunes gang are back on the court, 25 years after they teamed up with Michael Jeffrey Jordan (important distinction) to defeat the Monstars in the original Space Jam film. This time, Lebron James takes center court in a sequel that’s a mostly amusing and enjoyable family film also doubling as a two-hour showcase for James’ brand, Warner Bros. properties, Nike and a variety of other sponsors.

That’s not necessarily a bad thing, as the original Space Jam was primarily a marketing stunt to leverage one of the most famous athletes in the world, and resulted in a film that many basketball fans recall fondly. As with any sequel, this film lacks novelty of the original, but still provides younger audiences with an entertaining animated hoops crossover story.

Space Jam: A New Legacy is in theaters now and streaming on HBO Max in the U.S. for 31 days. Spoilers below!

Basketball superstar Lebron James (playing himself) is struggling to connect with his youngest son, Dom (Cedric Joe), who’s more into coding video games than playing hoops. James’ wife, Kamiyah (Sonequa Martin-Green), encourages him to be less of a coach and more of a dad. In an effort to improve his relationship with Dom, James takes him to Warner Bros. to hear a partnership pitch.

There, two Warner Bros. executives (played by Steven Yeun and Sarah Silverman) pitch James on a virtual platform called Warner 3000. Dom is intrigued but James doesn’t get it so he passes on the opportunity. Behind the scenes, Warner 3000 is actually run by a self-aware algorithm called Al G. Rhythm (Don Cheadle), who is offended by James’ rejection and decides to get revenge for the affront.

Rhythm manages to lure James and Dom into his digital world that exists within Warner Bros.’ servers (called the Serververse). There he challenges James to a virtual basketball game based on Dom’s work. If James wins, he gets his son back. If Rhythm wins, they’re stuck in the Serververse forever.

The matchup culminates in a final play where Bugs Bunny seemingly makes the ultimate sacrifice, using a move that causes a glitch in the Matrix game, taking control away from Rhythm and allowing James to scoring the winning bucket.

James and his family escape the Serververse, the Looney Tunes gang return to Toon Town and Rhythm is defeated.

Back in the real world, James realizes that he needs to let his son pursue his own interests, and takes him to coding camp over basketball camp. As the film ends, Bugs Bunny isn’t dead at all but is now in the real world along with the rest of his animated crew.

Space Jam: A New Legacy is both a family film that fans of basketball and Looney Tunes will enjoy, and a big budget commercial for Lebron James, Warner Bros. and associated brands. That may sound critical, but it’s important not to let nostalgia make us overly precious about the first Space Jam. That film was a feature designed to sell Michael Jordan and Looney Tunes to broader audiences by creating a crossover film. It worked, as Jordan became even more of a household name amongst kids, and hoops fans developed an affinity for the Looney Tunes characters.

The original Space Jam wasn’t exactly a masterpiece in filmmaking or storytelling. It was a fairly novel idea, mixing real life Jordan and other basketball personalities with animated characters. But beyond that, it was a mostly silly story that you enjoyed if you were a fan of one or both of Jordan and Looney Tunes.

Space Jam: A New Legacy carries that torch well. It takes the current biggest basketball superstar on the planet and puts a modern spin on the story to unite him with Bugs Bunny and friends.

It’s not easy for a basketball superstar to act, even as himself, but James delivers a solid performance. He’s likable and believable while interacting both with his on screen family and his animated friends. Because we know this film had to star James, its baseline quality rested almost completely on his acting abilities. I was definitely pleasantly surprised to see James show that he can adequately star in the film, maybe better than Jordan did.

There were zero acting concerns for Don Cheadle, who excellently plays the pompous and condescending, yet convincing, villain. Rhythm is reminiscent of Jadis, the witch from The Chronicles of Narnia: The Lion, the Witch and the Wardrobe (only with Twizzlers instead of Turkish Delights), and I enjoyed watching Cheadle play the bad guy as much as Cheadle seems to enjoy playing one.

The redesigned Lola Bunny voiced by the always amazing Zendaya is a welcome update to the awkwardly sexualized original version. Characters like Lola really make you reconsider the type of messages that we received as kids watching these seemingly harmless stories. As parents, you would think letting kids watch Bugs Bunny and Daffy Duck would be safe, only to have one of the only female cartoon characters be presented in a bizarrely sensual way. Thankfully, in this film, Lola is just a fun character who is minted an Amazon by Wonder Woman and also happens to be a baller.

The story primarily focuses on the relationship between James and his son, and as important as James’ acting abilities were to the film working, Cedric Joe as James’ son Dom was also critical. While he’s no Bronny James, Joe is relatable and he has strong chemistry with James.

Perhaps the biggest positive is that the film is a visual feast. Between the slick visuals and the countless Easter eggs, every scene is a challenge between focusing on the main characters and scanning the background for details. The film deftly switches between live action, traditional animation and 3D animation, and it all looks great. It also does an excellent job of leveraging Warner Bros. extensive library of characters, with everyone from Superman, King Kong and the Night King making cameos.

With a decent main cast and impressive visuals, Space Jam: A New Legacy successfully checks some of the most important boxes that make the film enjoyable.

Between the fun animated shenanigans, and the gorgeous visuals, it’s almost easy to overlook the fact that the story doesn’t make a whole lot of sense. Primarily, Rhythm’s motivations are unclear at best and completely nonsensical at worst. He wants to use James’ fame to realize his destiny and he’s offended when James rejects WB’s pitch. But it’s never explained what Rhythm achieves with James and how kidnapping James and his son helps bring him closer to that goal.

The stakes of the basketball game make sense for James, who just wants his son back. But if Rhythm wins, James, his son and all of James’ fans are stuck in the Serververse. Is Rhythm just really lonely? Why not just create more digital characters? How would having lifelong prisoners he can’t even control do anything for Rhythm?

Adding to the head scratching, Bugs Bunny tells James that his Looney Tunes crew abandoned him because Rhythm lured them away with promises of better situations. Yet, it’s never explained why he did that and what the consequences were for those characters. Indeed, when James and Bugs go to gather them, they don’t really seem to be in bad situations at all. So basically Bugs was just lonely and wanted his friends back?

The shaky plot is more egregious given the film’s runtime, which is about 30 minutes too long. This seems to be a common issue with children’s films (all films?) lately, where too much is added to the story when it really shouldn’t be longer than about 90 minutes (the original had a 100 minute runtime). Space Jam audiences want to see Lebron James play hoops with Bugs Bunny and friends against some animated bads. There’s no need to take a long time getting there.

Another significant disappointment is that Sonequa Martin-Green is criminally underused. She isn’t given anywhere near enough to work with and it’s a shame to have such a talented actress set aside for almost all of the film.

However, the single biggest flaw for this film is that *SPOILER* Michael Jeffrey Jordan doesn’t show up in the film. I just don’t know how Warner Bros. did a Space Jam sequel and couldn’t find a way to have Jordan make at least a brief appearance. The filmmakers try to make up for it with a fairly amusing cameo by Michael B. Jordan (no relation), and while the bit is entertaining, ultimately all it does is highlight the biggest failing of this film. You needed to have Michael Jordan in this movie. Period.

Space Jam: A New Legacy is a huge success when it comes to diversity in front of, and behind, the camera. That’s in large part thanks to Lebron James and his business partner Maverick Carter, who both served as producers, and whose production company, the SpringHill Company, co-produced the film. The impressive list of producer credits also include Ryan Coogler (producer), his brother Keenan Coogler (co-producer), his wife Zinzi Coogler (executive producer) and Justin Lin (executive producer).

Animation is still one area in the entertainment industry where diversity is often lacking and it’s wonderful to see a major studio animated film created by, and starring, Black talent.

The one area that made me cringe was with the character of Speedy Gonzalez. I recognize of course that the character dates back to 1953, but that’s exactly why an update was warranted. Speedy doesn’t play a big role in the story, but all we see and hear is the stereotyped accent and yelps of “Arriba!” At least the character was voiced by comedian Gabriel “Fluffy” Iglesias, who is Mexican American, but the more authentic voice casting couldn’t save the considerably problematic character.

Sam Wilson is wielding the Captain America shield once again! But, this time, it’s his own unique red, white and blue shield, he’s not...