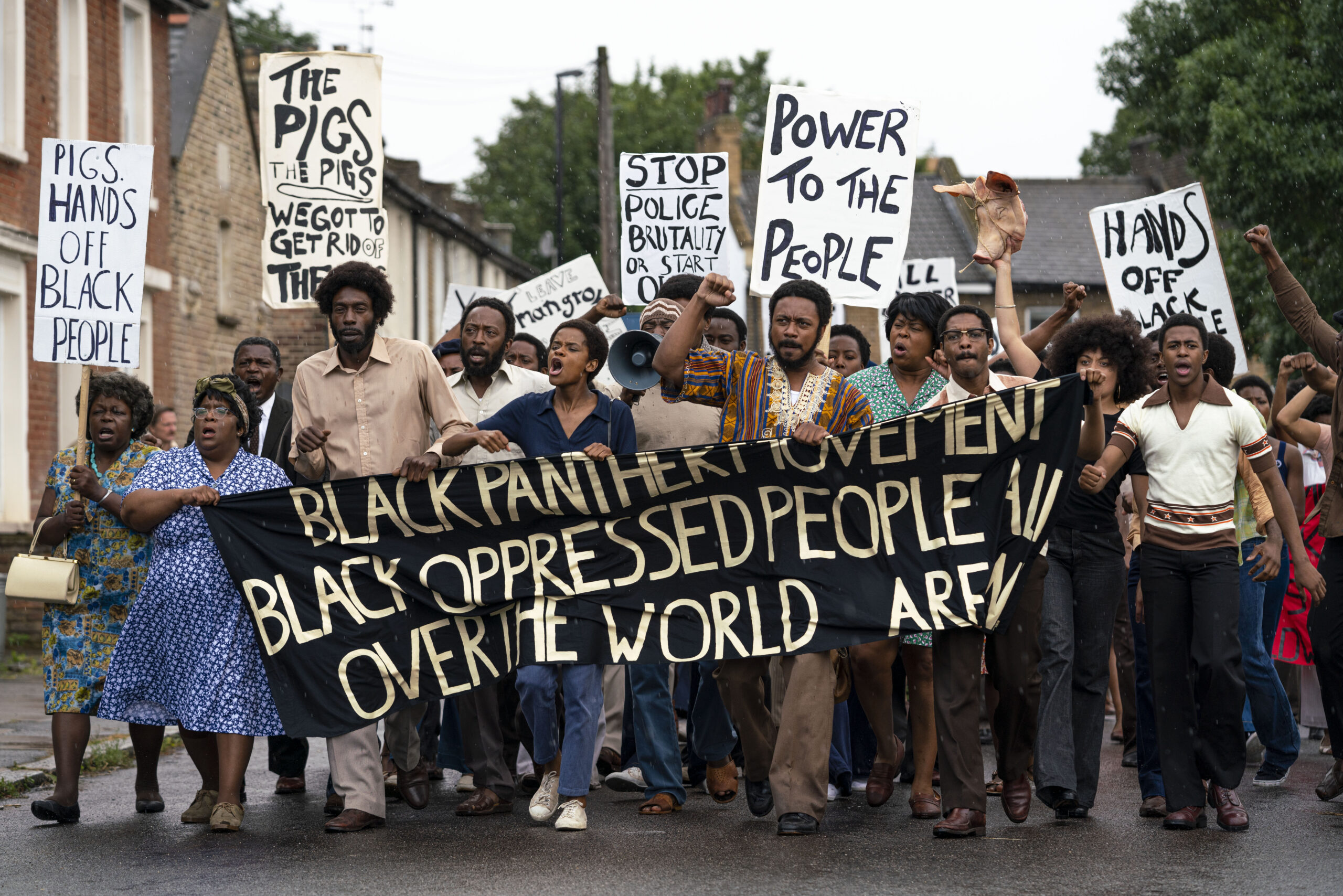 In the words of the great Bob Marley – “If you are the big tree, we are the small axe, sharpened to cut you down.” Small Axe is a collection of five films written and directed by Academy Award winner Steve McQueen (12 Years a Slave), centered on the West Indian experience in London. The first of those films, Mangrove, tells a story based on the true life events of the “Mangrove Nine”, a group of Black British activists who fought against racism and police brutality in Notting Hill, London in the 1970s.

I’m sad to admit that I knew absolutely nothing about the story of the Mangrove Nine until I watched this film. Just as many viewers knew nothing of the Tulsa, Oklahoma Massacre until Damon Lindelof made the tragedy the central event of his Watchmen series, I watched Mangrove unaware of the true life events and the historic characters it depicted. It seems I wasn’t alone, as Letitia Wright (Black Panther) who plays Altheia Jones-LeCointe, leader of the British Black Panther Movement, admitted that even growing up in the London, she knew little about this story. “I think it’s really important that this story is being told today. I wish it had been done sooner, but God bless Steve for wanting to honor our elders. Their stories are now being told and brought to the forefront. As a young person, I didn’t know the majority of the things that we are speaking about in this project.” Wright said via production notes shared to media. “I feel really ashamed that there was so much fight for us and that young people in our generation today do not understand the hard work and the love that’s gone into fighting for our rights to housing, our rights to education and our human rights to be respected.” Wright’s comments echo that of so many people of color whose stories have been ignored or erased in the history books. Thankfully, we’re in an era where more of these histories are being uncovered, shared and appreciated.

For McQueen, who conceived of this project 11 years ago, these stories were passed down by his family, and were reinforced by his personal experiences. “I recall each of these stories being told to me either by my parents, my aunt, and by experiencing racial discrimination myself growing up in the 70s and 80s. These are all our stories,” McQueen said.

McQueen couldn’t have known just how relevant Mangrove, and the Small Axe series as a whole, would be in 2020, but the events of the last several months have truly hammered home just how universal this story is.

Mangrove is the story of Frank Crichlow (played masterfully by Shaun Parkes), an initially reluctant civil rights activist who founded a West Indian restaurant in Notting Hill, London appropriately named “Mangrove.” Crichlow simply wants to run his restaurant honestly and serve the community he loves. And the community loves him and his restaurant back, treating the Mangrove as home base and regularly gathering together to enjoy the authentic West Indian cuisine and each others’ company. In real life, luminaries such as Nina Simone, Vanessa Redgrave, Diana Ross, Jimi Hendrix and Bob Marley were said to have frequented the restaurant. Early in the film, there’s true joy within the walls of the Mangrove, as the community feels a safety and welcome that is hard to find outside.

The local police, displeased with the sanctuary that the Mangrove represents, target Crichlow and regularly conduct baseless raids under the guise of searching for illegal activity such as drugs and prostitution. The raids become so excessive that Crichlow is on the brink of shutting down his restaurant. However, with the support of activists Altheia Jones-LeCointe (Letitia Wright), leader of the local British Black Panther party, and Darcus Howe (Malachi Kirby), the West Indian community organizes a peaceful march to the Notting Hill police station to protest.

Thanks in no small part to the aggressive response of the police, the protest escalates into violence, and nine men and women, including Crichlow, Jones-LeCointe and Howe, are arrested and charged with incitement to riot and affray.

The case is brought before a cranky old judge named Edwin Clarke (Alex Jennings) on the Old Bailey, a high court reserved for treason and high-profile murder cases. There, some of the defendants, including Jones-LeCointe and Howe, take the radical step of representing themselves so as to have the opportunity to speak directly to the jury.

After a grueling 55 day trial where the defendants faced on-going racism and police brutality at the hands of the court officers, and outright lies from the police testimony and condescension and dismissiveness from the judge, the defendants prepare for the verdict.

As each of the defendants are either found not-guilty of all charges, or have their charges reduced, we see Crichlow overcome with emotion. Judge Clarke concludes the trial with a declaration that is also an admission, “What this trial has shown is that there is clearly evidence of racial hatred on both sides.”

Mangrove features a stellar cast, led by Shaun Parkes, Letitia Wright and Malachi Kirby. I appreciated Parkes ability to take the audience on an emotional journey throughout the film, from Crichlow’s joy as he serves the patrons at his restaurant, his anguish as he’s faced with increasing violence and injustice at the hands of the police, and finally his catharsis as he and his co-defendants are granted justice in court.

Wright and Kirby were perfectly cast as young and passionate activists ready and eager to take on the establishment. McQueen mentioned that he had been speaking with Wright for the role well before she broke out as Shuri in Marvel Studios’ Black Panther, and it feels appropriate that the princess of Wakanda would play the leader of the British Black Panther party.

One weakness of the film is the sometimes ambiguous passing of time within the story. It’s difficult to decipher the moments when extended time has passed, such as between the arrest of the Mangrove Nine and the start of trial, and the length of the trial itself. It wasn’t impressed upon me just how unusually lengthy the trial itself was until I conducted some of my own research, and that seems to be a particular characteristic of the real life trial that was glossed over in the film. In the end, we get the story we need, and the focus is rightfully on the characters and their emotional struggles,

Mangrove is a powerful and personal film. You feel the frustration that Crichlow is going through as he tries to avoid conflict and simply run his restaurant. It shows just how insidious institutional racism is, because the victims often have no recourse. They have no path to justice, because the institutions established to protect individuals are the very ones perpetrating the injustice. Crichlow is a reluctant activist who initially turns to “proper” channels to air his grievances and to try to protect himself against the discrimination and brutality of the police. To nobody’s surprise, none of those pleas are effective, and Darcus Howe tells Crichlow that he can’t rely on the “white establishment.” By the time Crichlow, Howe and the other defendants get to trial, Crichlow has accepted the racist world they’re living in. When one of the other defendants screams in frustration that “it’s every man for his own self,” Crichlow responds by grabbing his arm, looking him directly in the eyes, and saying, “It’s them and we.” That moment reflects Crichlow’s forced embrace of his role as a community organizer and activist.

Beyond Crichlow, I was struck by the symbolism of having the defendants represent themselves so that they could use their own authentic voice in court. Much like the Mangrove Nine, Steve McQueen and the creatives involved in this series are finally able to use their authentic voices to tell their stories.

Reunited and it feels so good! Two of the most beloved Asian-American actors are teaming up again, this time to steal some loot (in...

Interview: Mayumi Yoshida – “The Man in the High Castle” Star Talks About Returning to the Show She Never Left, Why the Asian-Canadian Film Scene is Special and More!

Mayumi Yoshida is a multi-talented writer, director and actress. In the United States, she’s best known for her role as the Crown Princess Michiko...