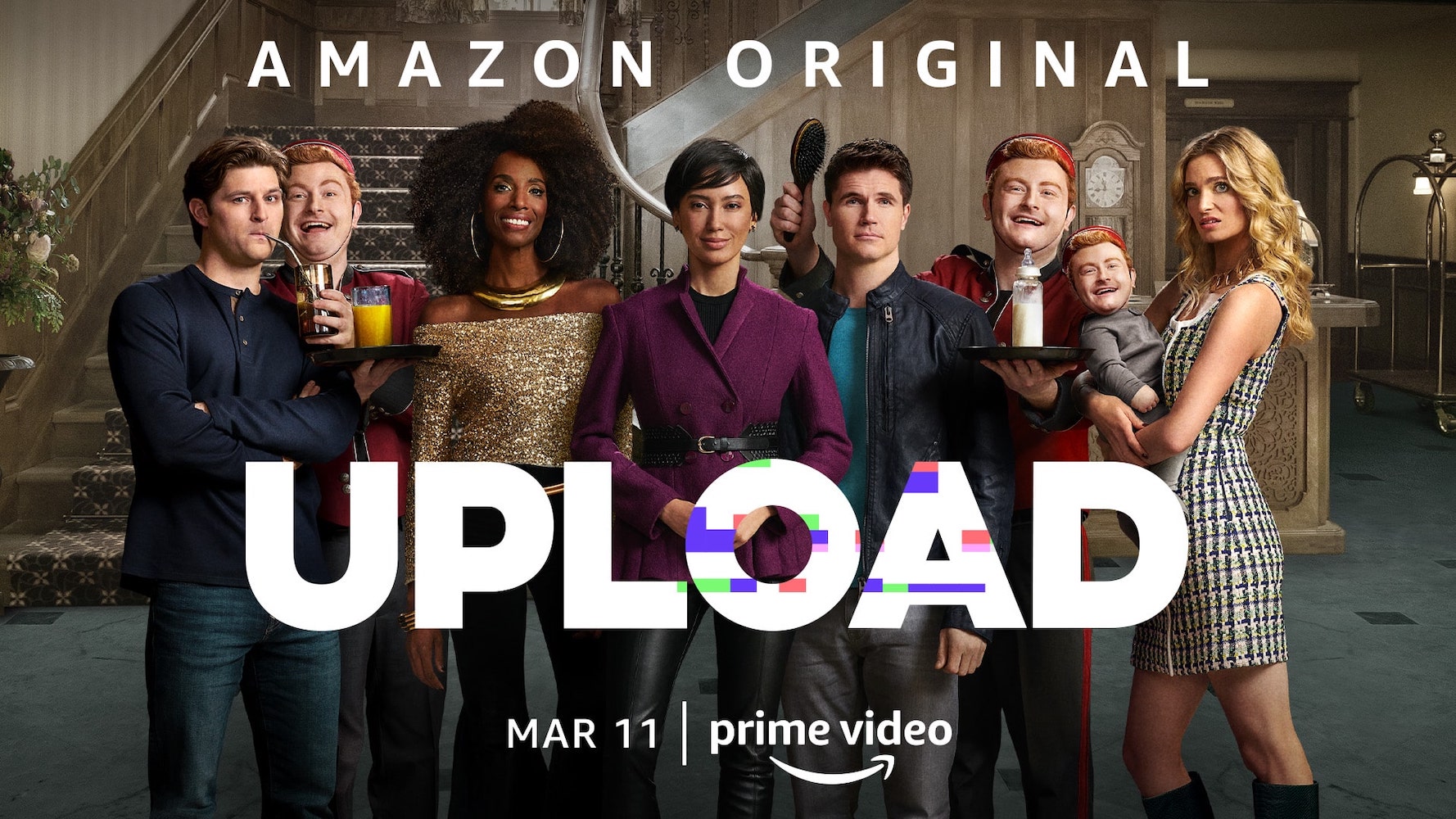 Upload, the sci-fi rom com by Greg Daniels, is back for a second season on Amazon Prime Video! The series takes place in the near future, 2033, when people can “upload” their consciousness to a digital afterlife (owned by various mega corporations), and that’s where we find our main character Nathan played by Robbie Amell. He is in Lakeview, a digital life extension owned by the tech giant Horizen.

Upload begins where we left off last season in 2gig, after the jaw-dropping revelation that Ingrid, Nathan’s girlfriend (played by Allegra Edwards), uploaded to be with Nathan when he runs out of data and instantly freezes.

While Nathan is frozen in 2gig, Nora is taken in by the Ludds, people who reject technology (as well as uploading) and are off the grid. Ingrid later takes Nathan back out of 2gig, and then the rest of the season is a thrilling, sci-fi romantic comedy ride just like last time. This season has a lot of heavy, emotional beats that are matched with its humor. The show also continues the heavy hitting criticism of capitalism and further explores the true nature of Nathan’s murder. We get some answers and some brand new questions, but let’s get into the review of season two!

Season 2 of Upload is more relevant than ever, an emotional jaw dropping ride every step of the way.

Sometimes with big TV shows, the second season isn’t as good as the first, or the quality diminishes. Fortunately, Upload manages to continue the momentum set by season one. It feels like exactly the same show, but in the best way. Be it the mystery, the humor, or the romance, season two captures the magic of season one while expanding on the world of 2033, and Nathan’s murder. I thought every episode was strong, as the pacing is very well done, with my favorite episodes being 203 – ‘Robin Hood’, 205 – ‘Mind Frisk’, and 206 – ‘The Outing’!

I think this season actually handles thrilling moments and plot twist moments better than the last. There actually may be more major plot reveals in this season, which I loved. Watching the plot unfold was a real treat. I’m usually not a fan of binging shows, and I think this was the first time I actually watched seven episodes of something in a row, but after my first watch, I rewatched the whole thing the following day! That should tell you something! The show is very rewatchable and might be a bit funnier that last season!

All the acting talent in this show are exceptional, but especially the actors whose characters spend their time in both the real world, and in Lakeview. Nora gets some great moments for Andy Allo to really show her acting talent this season, but for the sake of spoilers I won’t tell you how! A non-spoiler example is seeing Aleesha (Zainab Johnson) or Nora in their VR headsets at their desks, then appearing into Lakeview, and the shots go back and forth between the two settings throughout the scene. The visual effects play into this as well, which makes the show feel immersive.

The visual effects this season continue to wow. Whether it’s an actor’s instant wardrobe change in Lakeview, an avatar glitching, the establishing shots of future New York and Los Angeles, or the invisible VFX we don’t notice, this show would not work without the visuals being at a very high level. There are also a few hilarious moments that rely on the VFX since it’s more of a visual joke, which I personally have not seen before in a live-action show.

The show would not be the same without Owen Daniels as A.I. Guy. In Lakeview, there are many of A.I. guys running around to help all the residents in a variety of ways (in the elevator, as the concierge, as waiters, etc.). Daniels’ performance is so strong that I constantly forgot that he was an actual person when watching the show. I thought of him like a video game character just running their code, when I had to remind myself, “no, that’s a real person!” It’s a simple thing really, but his performance really helps to make Lakeview feel like a digital world.

This show has always had accurate criticisms of capitalism, but this season really ups the ante and is even more relevant. I will leave it there for the sake of avoiding spoilers, but I did not expect the show to go that far, and I loved that.

The music as well was really good! There were two tracks in particular, one that set a badass mystery vibe and another that felt more scary, helping to shift the tone from the levity of the rest of the show. Both actually included the same character, and really helps you react a certain way to what they’re doing. When you get to the last two episodes you’ll see what I mean!

While this season is a banger, there are a couple of issues.

I felt like this season didn’t have as much of a conclusive finale. Instead the season finale felt like it was the penultimate episode, or even that there were a few episodes left. The finale was a good episode, but I am left wondering why there were only seven episodes this season. This makes me wonder about how they will handle what comes next. It definitely sets future plot points up well, and I was left theorizing a bunch.

I had hoped that maybe we’d be introduced to a few more diverse characters this season, or delve more into the motivations and histories of side characters like Aleesha or Luke (Kevin Bigley). There are only a few new characters this time around, and they aren’t developed too much. It’s not necessarily a bad thing, since it keeps the show focused, but may be disappointing for some. I was specifically hoping for more queer representation in this season and sadly there isn’t any. The gay couple who made appearances in the last season wasn’t present either. One of my main gripes with this show is the lack of queer representation, and sadly that’s more prevalent this season.

The lead IT guy returns this season, he was in one episode last time, explaining the update to all the Angels in episode 9; except this season we see him in the real world instead of his Lakeview avatar. And unlike the Angels where their avatar looks the same as their person, it appears he’s in a fatsuit for the real life scenes, which is unfortunate.

Ivan (Josh Banday), Nora’s coworker, also returns; last season he was hitting on Nora a few times. In this season we see more of him and he has a lot of “incel” humor, and it could be a little forced at times, but the actor does play the part well and has a couple of hilarious moments.

Andy Allo continues to be the heart of the show, and her character Nora in many ways drives the plot of this season. She wants to hold the greedy, powerful people accountable, and she finds her own path towards making that happen. I found her very inspiring. She is growing into a leader as a character and I found it very empowering to see as a person of color!

Yang (Phoebe Miu) is Nathan’s friend from 2gig that he met at the end of the first season. Her character is sweet and there is a moment that really highlights the inequality even in a place like Lakeview. As seen in the trailer for the season, Yang attends a dinner party hosted by Ingrid and Nathan, and some snobby, rich guests are very rude to Yang. One guy snaps his fingers at her, asking for a drink, and just blankly stares at her when she tells him that she doesn’t work there. Another guest mentions there has to be winners (him) and losers (gesturing at her) in life. She was great, but with all of those moments together, it wasn’t great to treat one of the few Asian characters on the show as the butt of multiple jokes. It may partially be meant to show the inequality within the service Horizen provides and their guests, but I feel the humor around her in the dinner party episode was a bit unnecessary.

This season we also get newcomer Hiro Kanagawa as Detective Sato, who is investigating the elevator murder from the end of last season, and seems to be figuring some things out. He is a great addition to the cast! His character asks great questions, and thanks to him being around Horizen, we start to learn more about the company’s shady practices.