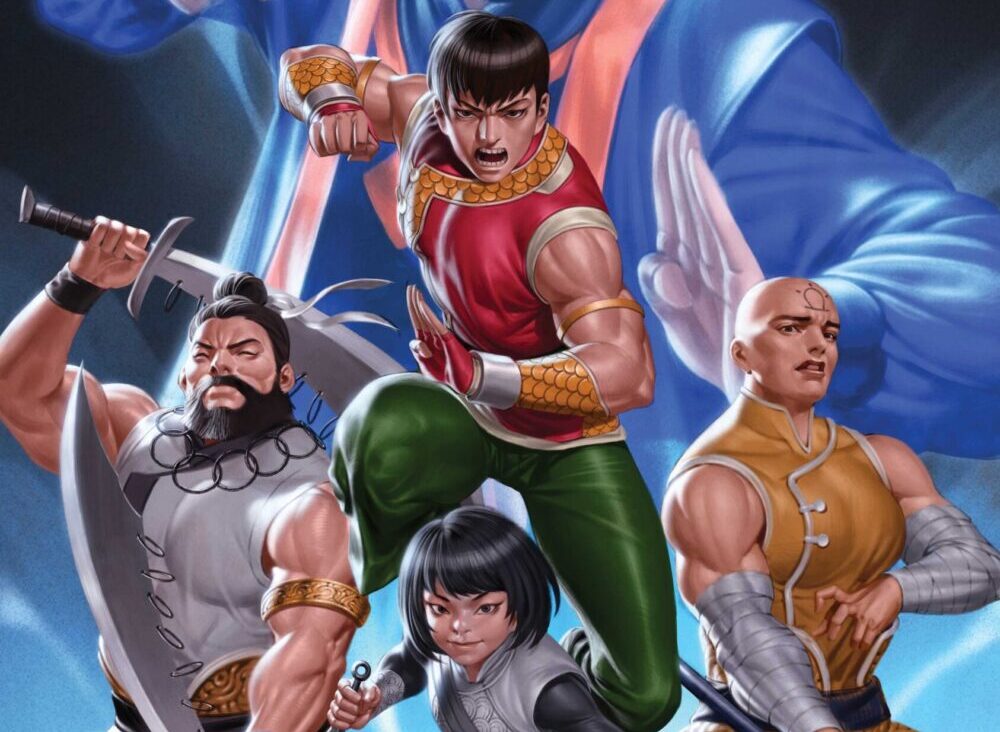 Shang-Chi is finally back with his first on-going series in almost 40 years! After a successful refresh of Shang-Chi last fall by the all Asian creative team of Gene Luen Yang, Dike Ruan and Philip Tan, Marvel took a brief break before announcing that Yang and Ruan would return for an on-going series.

Now fully embracing his destiny as the Supreme Commander of the Five Weapons Society, his father’s criminal organization, Shang-Chi is working to try to use the group’s talents for good, all the while trying to stay under the radar of the other heroes in the Marvel universe.

Shang-Chi #1 is available today at your local comic book store. Spoilers below!

Writer: Gene Luen Yang
Penciler: Dike Ruan
Cover Artist: Leinil Francis Yu
SHANG-CHI VS. THE MARVEL UNIVERSE! Shang-Chi and his family are back! And this time, they’re colliding head-to-head with the Marvel Universe’s biggest heroes! Shang-Chi has finally taken his place as the leader of the Five Weapons Society. But using an evil secret organization as a force for good won’t be easy. And it’s about to get a lot harder when Shang-Chi’s fellow super heroes, like the Amazing Spider-Man, start to see him as the bad guy! Gene Luen Yang and Dike Ruan return to bring you the next chapter of this Marvel legend!

The issue kicks off a story arc titled “Shang-Chi vs. the Marvel Universe,” and who better to start with than the friendly neighborhood web-slinger himself, Spider-Man.

Shang-Chi and his newfound sister Esme, also known as Sister Dagger and the breakout new character from the Shang-Chi miniseries, are in New York investigating a drug ring started by their father. While Esme investigates some leads, Shang-Chi tries to squeeze in a date with Delilah, the lawyer who also appeared briefly in the miniseries.

It’s nice having more Asian women characters in Marvel comics like Esme and Delilah, but it felt a little strange to see Shang-Chi try go on a date in the middle of a mission. I do appreciate Yang’s commitment to humanizing Shang-Chi and developing him as a more full character who desires a relationship.

Shang-Chi and Esme find that the drug ring they’re tracking is also being tracked by Spider-Man. Esme, finally showing the teen girl side of her, is super excited to meet Spidey, who she knows from internet videos. She actually refers to Peter Parker as “My friendly neighborhood Spider-Man,” which I found to be hilarious and sweet. Having grown up on the Spider-Man cartoons and that unforgettable jingle, I could totally relate to Esme in that scene. The fangirling doesn’t last though, as Esme soon finds that Spider-Man doesn’t quite agree with her methods, at one point tying her up in his webbing to prevent her from potentially stabbing one of the thugs. “He snotted on me!” Esme screams.

For Shang-Chi and Peter, this issue is a bit of a reunion, as the duo trained together way back in Free Comic Book Day vol. 2011 Spider-Man, where Shang-Chi taught Peter how to fight without his powers, and developed “The Way of the Spider” fighting style.

Peter is eager to team up with Shang-Chi and even Esme to track down the drug ring, but Shang-Chi is much more reluctant, fearful that Spider-Man will discover that the drug ring is connected to the very organization he now leads. The common thread through this story, and likely this whole arc, is Shang-Chi’s struggle with balancing his new role and his past relationship with Marvel’s heroes.

Eventually, the three discover that the thugs are getting a special root from a traditional Chinese medicine shop, which turns them into super-powered monsters. While trying to take down the man responsible for distributing the root, Peter gets infected with it, and Shang-Chi and Esme have to battle a six-armed, super-powered version of Spider-Man. The Shang-Chi and Esme vs. Spider-Man scenes were excellently drawn by Dike Ruan. His art always has a dynamic feel with lots of speed, and a fight between these three characters would be incredibly fast paced.

Shang-Chi and Esme get Peter back to normal, and though they’ve managed to capture several of the thugs and seize their assets, the man responsible for the special root gets away. In the process, Peter discovers that Shang-Chi is now the leader of the Five Weapons Society, and asks pointedly, “Are you still one of us?”

Using Spider-Man to reintroduce Shang-Chi and his new allies to the larger Marvel comics universe was a great decision. Now that Peter knows that Shang-Chi is the Supreme Commander, word is sure to get around and there will be fall out.

It struck me as odd though that Shang-Chi is so desperate to keep the truth hidden. It’s not clear to me whether Shang-Chi intends to maintain the nefarious reputation of the Five Weapons Society, in the same way that Jimmy Woo’s Atlas Foundation maintained the facade of an evil organization while actually doing good. Otherwise, it would seem much easier to simply introduce the Five Weapons Society and his new siblings to the Avengers or make some other public declaration.

More symbolically though, I appreciate what the Five Weapons Society represents, in that Shang-Chi is truly an Asian-American, torn between his traditional family heritage, and the new western life he’s adopted. Shang-Chi struggles with just being a New York superhero fighting alongside Spider-Man as he did for so many years, and his new position as the leader of an ancient Chinese organization. I love that conflict.

Finally, one of the my favorite nuggets continues to be the way Gene Luen Yang handles Shang-Chi’s current and past dialogue. Starting from the miniseries, he’s poked fun at the fortune cookie like manner in which Shang-Chi used to speak in previous stories. In this issue, Shang-Chi is speaking perfectly normal English with Esme, but when Spider-Man shows up, suddenly he switches the way he talks. “Brother, why do you talk like such a dweeb when you’re around [Spider-Man]?” Esme asks. I loved that moment, and that Yang isn’t afraid to reference Shang-Chi’s somewhat problematic comic history.

This series is off to an excellent start, and next issue features Captain America, so it’s sure to take the story to a new level. Shang-Chi is truly back!