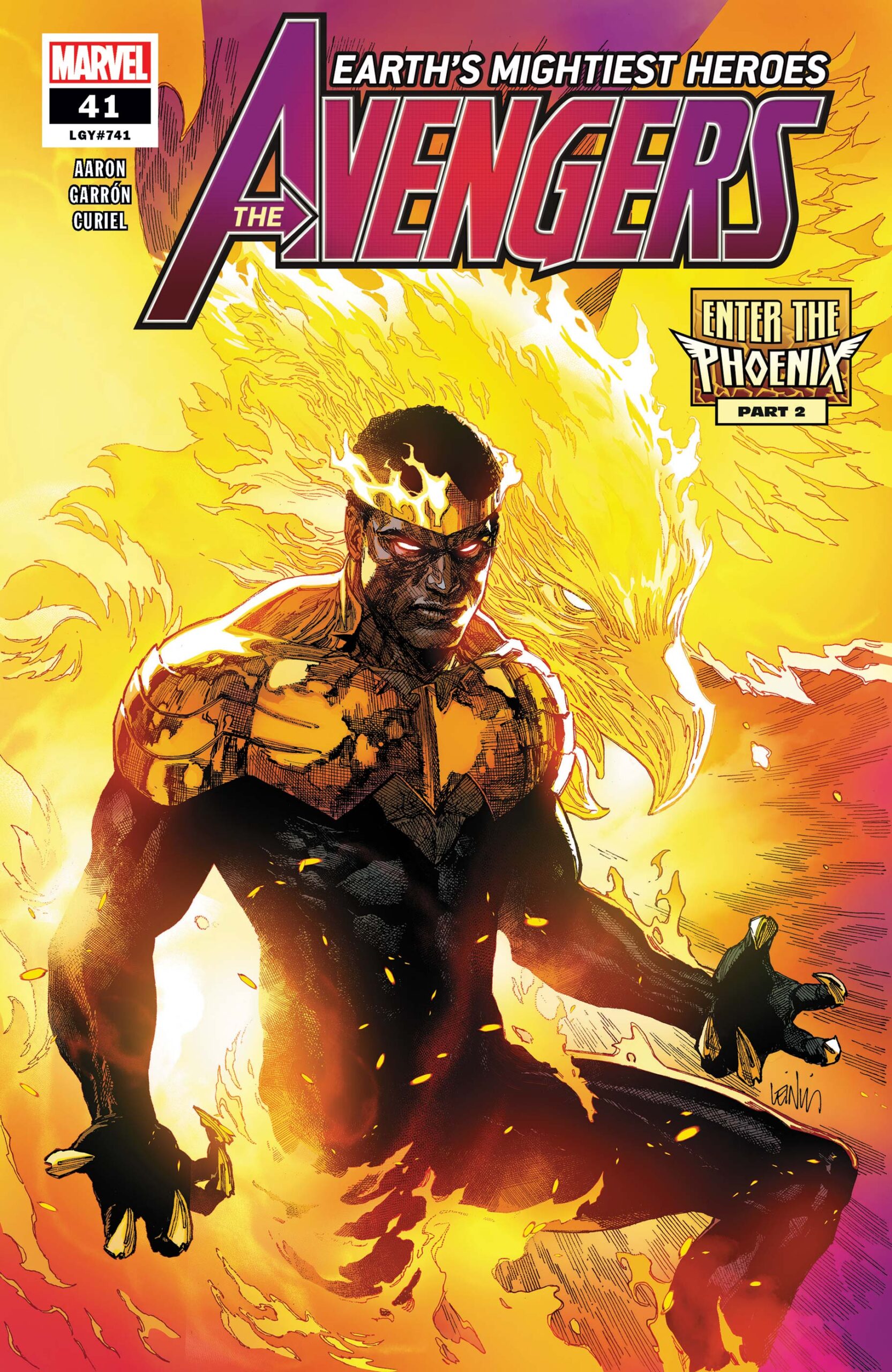 Enter the Phoenix continues this month with a focus on a number of battles. Black Panther takes the spotlight as he encounters the Phoenix Force and is forced into two major battles.

Avengers #41 is available in local book stores now. Spoilers below!

Writer: Jason Aaron
Penciler: Javier Garron
Cover Artist: Leinil Francis Yu
THE BATTLE TO DECIDE THE ALL-NEW PHOENIX CONTINUES! Who will wield the power of the PHOENIX FORCE? A globe-spanning tournament is underway, under the direction of the firebird itself, pitting some of Marvel’s greatest heroes against their fiercest enemies and also against each other, giving each of them a taste of the awesome cosmic might that’s at stake. All will be transformed. Not all will survive.

The Phoenix Force tournament really picks up this issue. After just one match last issue between Captain America and Dr. Doom, this time we get several battles, including Luke Cage vs. American Eagle, Shanna the She-Devil vs. Moon Girl and Devil Dinosaur, Shang-Chi vs. Hyperion, Howard the Duck (!!!) vs. Red Widow, and more.

The spotlight however is squarely on T’Challa, as he’s given two battles. Black Panther is first sent to fight Man-Thing in a visually stunning battle that ends with T’Challa running through him. Later, we find out that he is the Phoenix Force’s preferred host. The Phoenix Force appears to T’Challa in the spiritual form of one of its early hosts, the woman from issue #39, and pushes him to submit to the Phoenix. T’Challa is unimpressed and explains that if the Phoenix doesn’t prove that it is not a threat to Earth, he will destroy it. Arrogant T’Challa is the best and I hope we get a chance to see him take on a god-like entity like the Phoenix. If we’ve learned anything over the years, it’s to not underestimate what T’Challa can do.

Later, as a penalty for his brashness, T’Challa is sent out again for a battle, this time with Nighthawk. I really enjoyed the T’Challa vs. Nighthawk trash talk and battle. Great art, great banter, and overall just a very intriguing match-up.

I really enjoyed the various pairings, and Aaron does a fantastic job of identifying each of the combatants within the context of the story. It allows the reader to know the lesser known characters, which is particularly helpful given that the Phoenix infused looks can sometimes cause confusion. Aside from Black Panther vs. Man-Thing and a couple others, we actually don’t get to see many of the fights conclude. I’m not sure if that means they will continue on next issue or if we’ll just have to make our deductions based on who’s left.

This was an action-packed issue with eye-popping art and some fun nuggets, like the inclusion of Howard the Duck. This arc feels a bit like an arcade gamer’s dream, but it’s been an entertaining read thus far.

This issue was a fast and fun read but it’s frustrating that two full issues (and a prologue issue) into this storyline and we know very little about what the rules of engagement are. Are all the characters in one holding area? Is there sleep? How were the characters chosen? Are they fighting with the Phoenix Force or without abilities? It’s all very unclear. Part of the intent might be to keep the readers as much in the dark as the participating fighters are, but the parameters could be clarified more.

I also haven’t been a fan of the Phoenix inspired looks for the characters. Combining traditional designs with Phoenix fire should be really cool, but for the most part they’ve been uninspiring. T’Challa’s Phoenix design is particularly disappointing and plain. Why is there a small portion of his chest exposed? I would have liked to see a design more in line with Vibranium designs, or at least something unique to Black Panther. Nighthawk’s look was probably one of the best.

This issue was full of diverse characters. We got to see T’Challa and Nighthawk, Shang-Chi made a brief but amusing appearance, Moon Girl is there, Namor plays a substantial role, and Maya Lopez shows up as well. It’s great to see so many diverse characters, both prominent and lesser known, in an Avengers book.