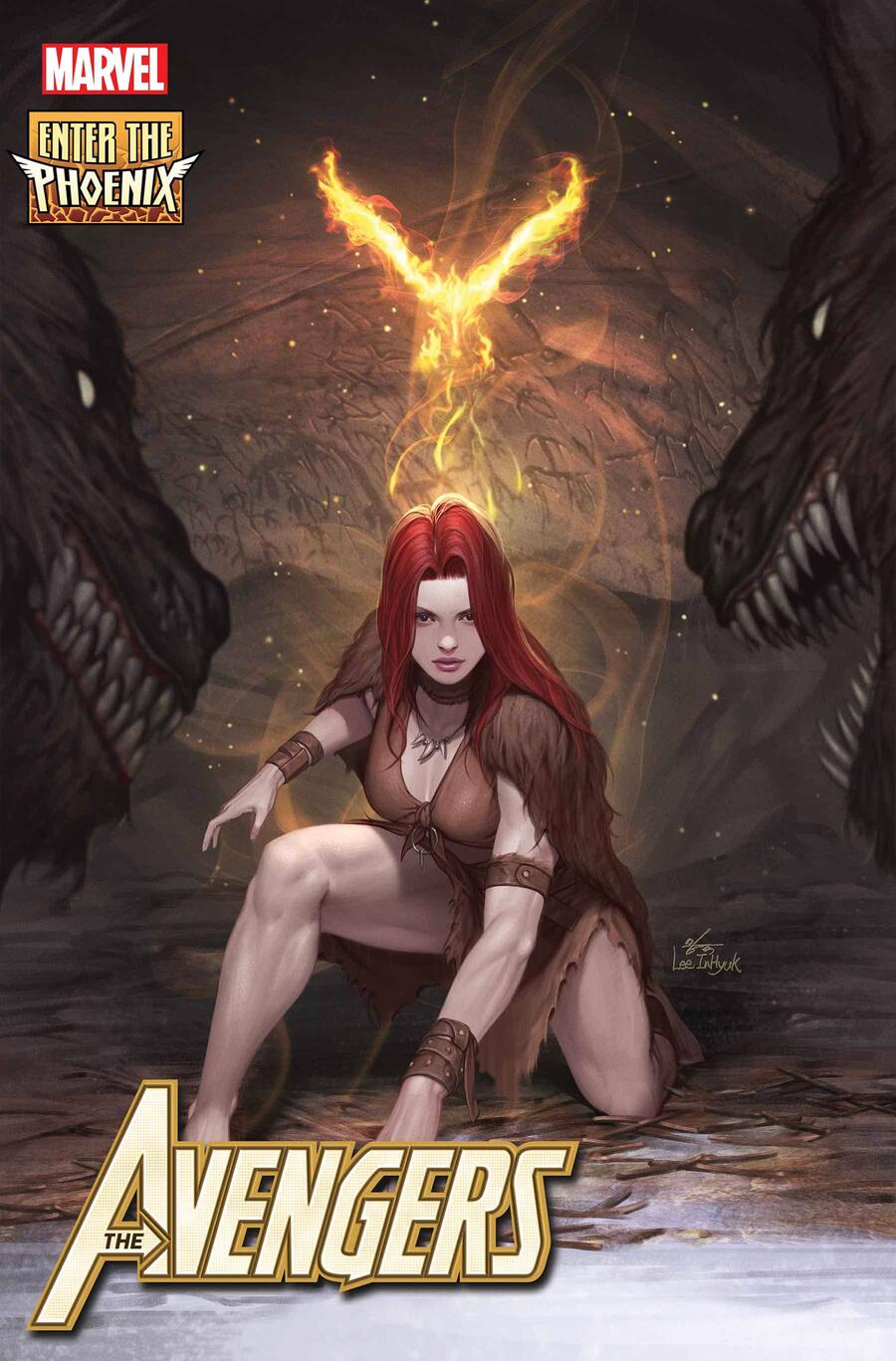 I’m extremely excited for the next Avengers event, Enter the Phoenix. It’s a nice yin-yang balance to have two big events going on concurrently in Marvel, where one is a dark, simbiote focused event in King in Black, while the other is a bright, fire centered event in Enter the Phoenix. I have to wonder if the two events will cross over in some way towards the end.

In the meantime, Avengers 39 is the a prologue for the main event and tells the story of what might be one of the Phoenix firebird’s earliest appearance on Earth. Below is my non-spoiler advance review. Of course, the idea of what constitutes a spoiler is vague so please proceed with caution if you don’t want to be spoiled. I’m not sure why you’d be reading this if that’s the case but I appreciate it anyway!

Writer: Jason Aaron
Penciler: Dale Keown
Cover Artist: In-Hyuk Lee
ENTER THE PHOENIX PROLOGUE! In the harsh, primordial world of One Million B.C.E., early humans who are different are left in the Burnt Place to die. But one young girl whose only crime was being born with red hair finds something else entirely in the place of bones and ash – something that will change human history forever.

First of all, I love In-Hyuk Lee’s covers. They’re always stunning and have such a unique flair that you can go look on a comic book shelf full of new comics and know immediately which ones are In-Hyuk Lee covers. This cover is no exception and stands out in my mind as particularly strong because of the degree of difficulty that comes with drawing a cover where the one character featured isn’t one that is easily recognizable.

So to is the story, which centers on the origin story of a girl one million years ago. There aren’t many distinct characters in this book, and certainly not any A-list ones. Instead, Aaron and. Keown made the bold choice of kicking off a major Avengers event with a very tight and focused story on a character nobody knows. Or do we? The girl in question certainly looks familiar…and feels familiar…but again, this story takes place on million years ago.

Regardless, the story is gripping from beginning to end and it accomplishes the primary goal of the prologue – I’m absolutely ready for Enter the Phoenix!

This is a strong story and a very strong prologue to a larger story. Of course, if you happened to randomly pick up this book expecting an Avengers story, then you’ll be sorely disappointed since not a single Avenger appears.

Further, while it’s impossible to know without the benefit of hindsight, I wonder if this particular story could have been included as part of another issue. While it’s a good story, it’s a fair question whether it carries the proper value of a full Avengers comic. Maybe once Enter the Phoenix is over, we will look back and realize what an important book this was. Essentially, the question is whether a prologue story is worth your $3.99, and the answer right now is, “to be determined.”

Diversity isn’t a strength of this book from a character standpoint. Again, there’s really one character here so you know what you’re getting from the cover. I will say though that the themes raised in the book are very relevant to those of us who have been “othered”. The underlying idea behind the story is one of being ostracized for being different, and of desiring and seeking others who also suffered the same fate. Those of us in the diaspora often want to find our tribe and this is very much a story about that…well, that and a giant, mythical firebird that destroys worlds.