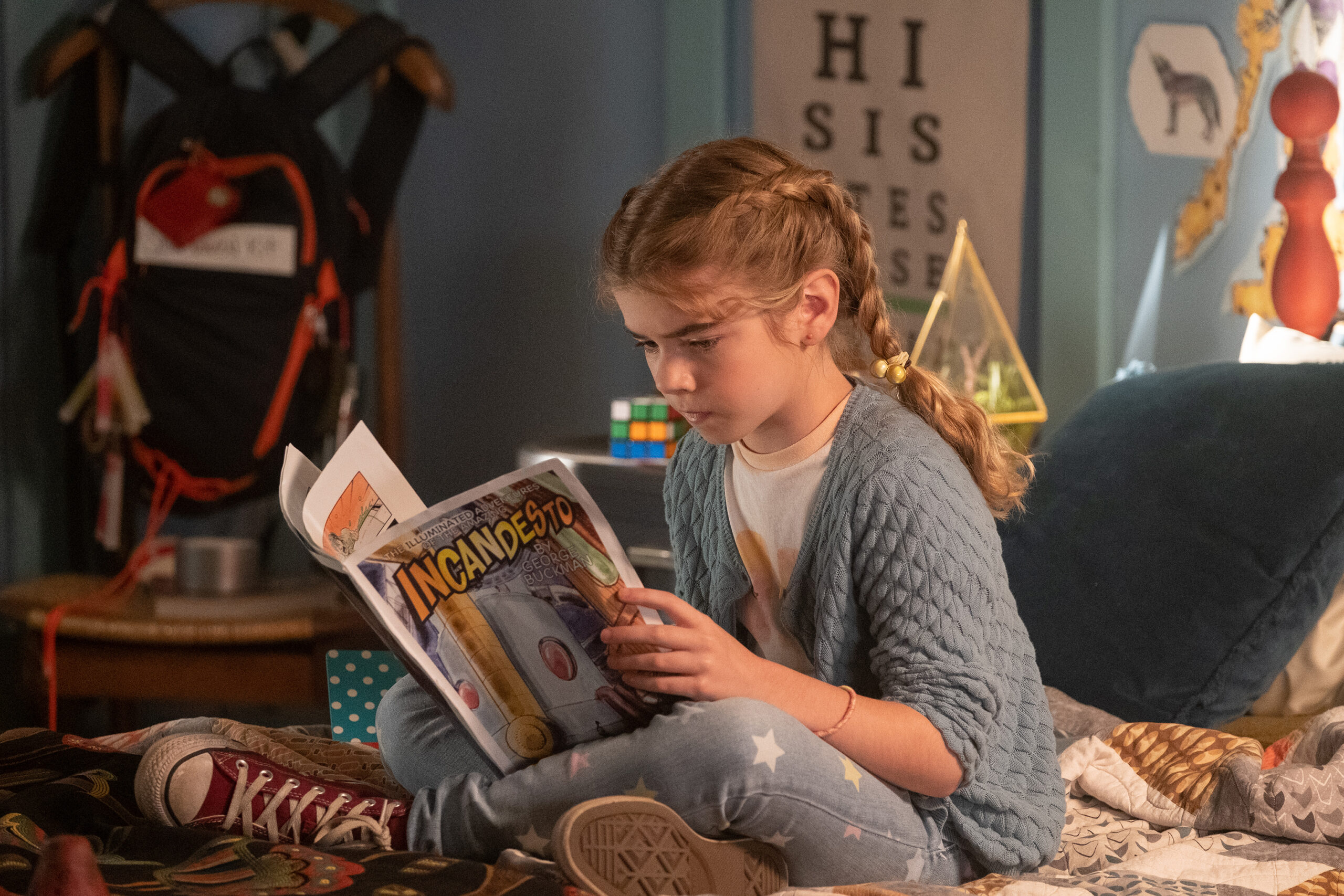 Matilda Lawler as Flora in FLORA & ULYSSES, exclusively on Disney+.

Disney’s Flora & Ulysses is a superhero infused family film that makes you feel good. Superhero films are all the rage right now (and by “now” I mean the last decade), but it’s not often that the superhero genre crosses over into family films. Flora & Ulysses, based on the Newbery Award-winning children’s book by Kate DiCamillo, is a story that reminds us that superheroes represent hope and inspiration; as does this film.

Flora & Ulysses features an A-list cast of comedic actors with electric chemistry. Matilda Lawler (The Block Island Sound) stars as Flora, alongside Ben Schwartz (Parks & Rec, Duck Tales), Alyson Hannigan (How I Met Your Mother) and Danny Pudi (Community, Duck Tales). The film tells the story of a little girl who meets a squirrel with uncanny abilities that inspires her and her family. It’s the kind of film that we all need to see right now, and even more importantly, that we can watch with our families and loved ones of all ages.

Flora & Ulysses premieres on exclusively on Disney+ this Friday, February 19th! Spoilers below!

Flora (Matilda Lawler) is a 10-year-old girl who is smart, determined and loves comic books. Her father, George Buckman (Ben Schwartz) is a struggling comic book creator whose career disappointments have dragged him down so much that his family life is falling apart. George is separated from his wife and Flora’s mother, Phyllis Buckman (Alyson Hannigan). He still loves her but can’t seem to get out of his own way to keep the marriage together. Phyllis is an accomplished romance novelist whose personal rut has crossed over into her professional work. The Buckmans are in a bad place.

Enter Ulysses, a peculiar squirrel that Flora finds in her neighbor’s yard and saves from a runaway vacuum. Flora takes Ulysses home, where she finds that the squirrel has some uncanny abilities. Ulysses is unusually aware and interactive, can use a typewriter and actually type out poems, and has super strength and even flight.

Ulysses’ exploits catch the attention of a local animal control officer (I use that term loosely), Miller (Danny Pudi), who has a bad history with squirrels. Miller is intent on redeeming himself by capturing and euthanizing Ulysses. Flora and her visiting neighbor William (Benjamin Evan Ainsworth) rush to keep Ulysses away from Miller’s pursuit, and in the process inspire George and eventually Phyllis to join in on the mission.

Although the goal is to save Ulysses from Miller and his disturbingly cavalier use of tranquilizers, in the end, it’s Ulysses who saves the Buckmans by bringing them together and reminding them not to give up on each other.

I can’t recall a more sizzling collection of comedic actors brought together in a film like Flora & Ulysses. Ben Schwartz, Danny Pudi and Alyson Hannigan could each carry their own comedy, and having the three play off each other is simply a joy.

At the global press conference, Pudi joked that it was easy to work with Schwartz because the two have played brothers for the last three years on Duck Tales, and that familiarity paid off on screen. Pudi is excellent as an (almost) mustache twirling villain in this story, and his scenes opposite Schwartz are not only fun for the viewers, but were clearly fun for the actors as well. Another comedic aspect where Pudi excels is with the physical comedy. At several points in the film, Pudi’s Miller is attacked by a stray cat, who is as feral as the Wolverine. The repeated battles between Miller and his feline friend are sure to be a highlight of the film for kids.

Matilda Lawler and Ben Schwartz are truly endearing as a father-daughter duo. Even amongst the already close-knit cast, Lawler and Schwartz displayed a particular chemistry (which was easy to see during the press conference), that was important for the success of this film. Lawler in particular gives a genuinely fun and memorable performance. She plays the role of Flora with such an infectious zest and enthusiasm that you can’t help but cheer for her.

At its core, Flora & Ulysses is a story about family healing. And at a time when so many of us are struggling, when so many are dealing with personal challenges that inevitably carry over to our personal relationships, the film is a nice reminder that it’s easier to get through the difficult times when we don’t give up on each other.

The primary area of disappointment in Flora & Ulysses is with the character William, a visiting neighbor who is eager for adventure, but struggling with temporary blindness. For a majority of the film, the character contributes little more than providing moments of awkwardness as he wanders aimlessly because he can’t see.

Those scenes are intended to be funny, and while I’m glad that William’s condition was explicitly made to be temporary, the humor didn’t land for me. Ainsworth gave a strong performance and is genuinely likable, but it I couldn’t shake the discomfort with repeatedly using a kid’s blindness, even temporary blindness, as a comedic punch line. To be fair, the humor is never mean spirited or mocking. It’s simply intended to inject some moments of humor at various points in the film. Unfortunately, it didn’t quite work.

Flora & Ulysses is directed by Lena Khan, a Canadian-American who is Muslim and of South Asian descent. This film is her second feature film, coming off the critically acclaimed film The Tiger Hunter, which also starred Danny Pudi. It’s wonderful to see a director like Khan get the opportunity to tell a very American story. Too often, diverse filmmakers are expected to only tell stories that perfectly match their own backgrounds, and this film is a refreshing departure from that rigidity.

Further, while Pudi is the only actor of color in the main cast, the background characters are full of diverse actors. Anna Deavere Smith plays an important supporting role as Dr. Meescham, who acts as a mentor to both Flora and George, and an accomplice to their plans to save Ulysses. Smith didn’t get as much screen time as I would have liked, but her character exuded warmth and wisdom in every scene she was in.

Diversity is another area where I wish the character of William would have been handled differently. Again, Ainsworth delivered a fine performance, but it would have been a nice opportunity to add some more diversity to the main cast if William was a person of color.

In this article:Disney, Disney Plus, DisneyPlus, Flora and Ulysses, FloraandUlysses, Review