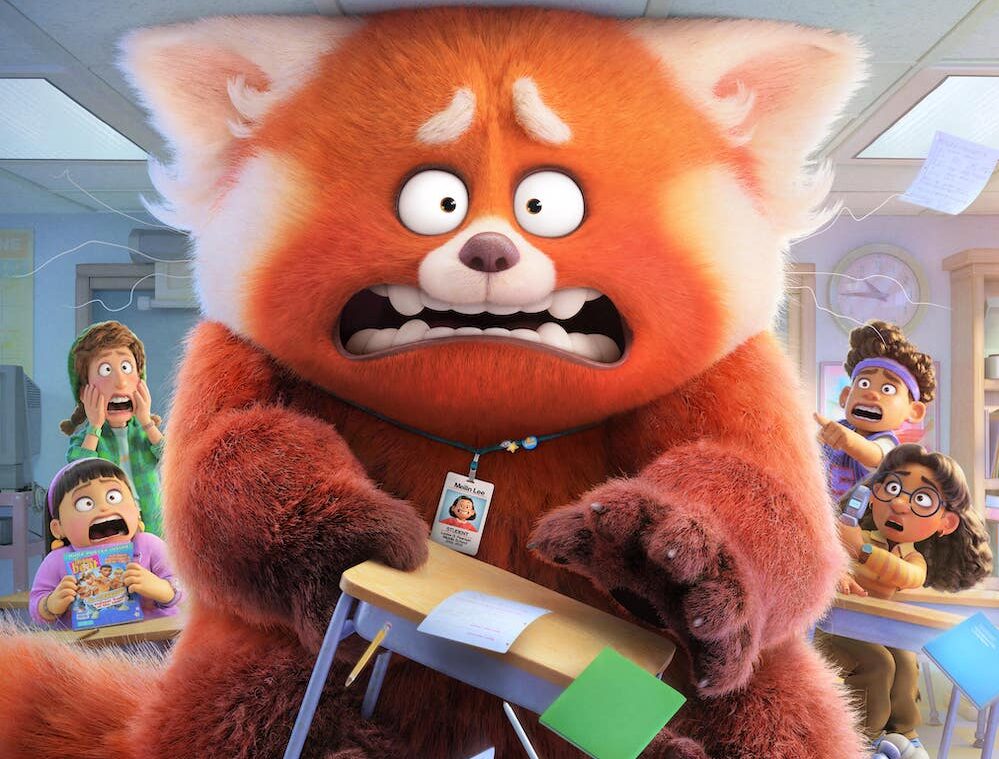 Disney Pixar’s Turning Red is the studio’s first film led by an all women creative team and its first with an Asian girl protagonist. Taking place in Toronto, Canada in the early 2000s, Turning Red is a story about the pre-teen growing pains that we’ve all been through. Of course, for the main character Mei Lee, these growing pains just happen to manifest themselves in the form of a giant red panda.

Originally expected to be a theatrical release, Disney made the decision to move Pixar’s 25th film to a Disney+ exclusive release, marking the third straight film from the studio to premiere on the streaming platform.

Director Domee Shi, who won an Academy Award® for her Pixar short film Bao, makes her feature film directing debut with a story that is both extremely personal and thematically universal. In many ways, Turning Red feels like a spiritual sequel to Bao, with both stories centering on the relationship between a mother and her child and the inevitable conflict between the two. Much like Bao, Turning Red is full of heart and emotion and sure to serve as a reminder to both parents and kids that despite the disagreements, their time together should be cherished.

Turning Red premieres exclusively on Disney+ on March 11th. Some spoilers below!

Pixar has never looked this fun before. It’s almost an impossible statement considering the studio’s track record, but Pixar has created a film that is a near perfect blend of eastern anime and western animation. Chinese-Canadian director and animator Domee Shi infused her own personal background and passions into this film, resulting in an incredibly bright and fun aesthetic and story. Shi, who shared with me in an interview that she was VIce-President of the Anime Club in high school, took inspirations from beloved anime stories like Ranma 1/2, Sailor Moon, and Fruits Basket to create a version of Toronto that is bursting with pre-teen life and practically a character itself within the film. It’s not just Toronto generally either, it’s specifically Chinatown in Toronto, where the film’s protagonist, Mei Lee, and her family live.

Production Designer Rona Liu, who previously worked with Shi on Bao, mentioned that she’s never worked with a director like Shi, who has such a clear vision of what she wants the film to look like. From the character designs (Mei Lee and each of her crew of besties have a specific look to reflect their personalities), the city landscape (the graffiti in the background are works of art) and the colors (everything on screen pops), Turning Red is the finest eye candy. Together, Shi, Liu and the rest of the creative team developed such a unique and beautiful world for this story that the joyful visuals alone make this a memorable film.

Mei and her friends add the humanizing element to the film, not only having distinct personalities, but showing the kind of dedicated friendship and loving loyalty to each other that we all wish we had growing up (and for that matter as adults as well). Mei’s friends, Miriam (voiced by Ava Morse), Priya (voiced by Maitreyi Ramakrishnan) and Abby (voiced by Hyein Park), are a wonderfully diverse and supportive group. Through this quartet, the film shows a really healthy and positive group of teen girls that carry the emotional weight of the film. While we’re in an era where stories of teenage grittiness are embraced, Turning Red is a nice departure from the kind of films or shows that keep parents up at night. Of course, there’s nothing wrong with either type of story, and really we need all the different variations of stories to be told, but the kind of loyalty that Mei and her friends show each other certainly sends a positive image.

Thematically, Turning Red does a great job telling a very specific Asian family story that is universal enough for nearly everyone to relate to. The moments of Asian authenticity are sprinkled throughout the film, from Mei folding dumplings and watching Asian dramas with her parents, to the filial obligations that many Asian kids have to help their parents with the family business. Mei strives to be the perfect kid because her parents have given everything they have to create a perfect future for her. As Mei says to herself after disappointing her mother, “You’re her pride and joy so act like it.” It’s the kind of burden that I personally have experienced and so many other Asian Americans, Asian Canadians and others in the diaspora have felt as well. Many immigrant Asian families have sacrificed much for the next generation, and they make sure their kids are very well aware. Shi is able to share this story packaged in a hilariously absurd way, manifesting the pre-teen angst in the form of a giant red panda.

Turning Red sounds like a crazy premise. But at its core, it’s the story of that difficult time when you stop being just your parents’ kid and starting trying to figure out who you are as your own person. It’s a period of self-discovery, independence and struggle. Thinking about that time in my life, it makes perfect sense that the story would be embodied by an angry bear.

Turning Red gets a lot of characterizations right. However, some of the characters around Mei and her friends are less well developed. Primarily, Mei’s mom Ming, her father Jin (voiced by Orion Lee), and her grandmother (voiced by Wai Ching Ho) are disappointingly one-note. Jin in particular is little more than a wallflower, doing very little in terms of actually engaging with the story. It’s a bit of a stereotype that Asian families have very strong mothers and passive fathers, and I was disappointed to see that reflected here. The central relationship of the story is Mei and her mother, but her father could have, and should have, done more for a daughter who suddenly discovers a life-changing family history.

Ming and her mother are stronger characters, and yet still underdeveloped. To the extent there are villains in this story (and there really are not), the mothers fill the role, but the characterizations feel too one-dimensional. There’s a hilarious moment where Ming is hiding behind a tree while Mei is in school, and that mortifying scene is taken literally from Shi’s own school experience with her mother. Turning Red displays teenage cringe perfectly. However, there are simply too many of those kinds of horrifying moments with Ming and too few of the heartfelt and loving moments. Understandably, the perspective of this story is very much from Mei’s point of view, and what child doesn’t eventually feel like their parents are the villains of their story? However, I expected the parental perspective to be better represented and for Ming in particular to have a more redeeming arc.

Further, the plot also suffers from a bit of Marvel superhero like storytelling in the third act, with an over-the-top grand “battle” that is largely unnecessary. I understand what Shi and her team were going for there, and it probably seemed like a really fun escalation of the story, but in execution, the massive climax took away from the emotional connection to the characters that carries the film. With Marvel, it’s much more expected and in many ways necessary. However, with a film like Turning Red, the intimacy is critical, and the epicness of the climax felt more like a distraction.

Turning Red is a beautifully diverse film that is appropriately set in a diverse city like Toronto. Domee Shi is the first woman of color to direct a Pixar film, the screenplay was written by Shi and Julia Cho, Rona Liu is the Production Designer, and overall the cast and crew is full of diverse talent up and down. The western animation world is often dominated by white men who write and direct, despite the fact that many of the animators and other creatives behind the scenes are diverse. It’s simply wonderful to see a film like this led by women of color in front of the camera and behind it.

It’s no surprise, considering the diverse creatives of this film, that this film is bursting with diversity on screen. So many of the characters, both the main characters and those in the background, are characters of color. There is one scene in particular in Mei’s band class where all of the band members freeze and look towards the camera, and it’s the first time I can remember seeing a whole class full of brown kids in an animated film of this magnitude. The diversity is obviously intentional and yet never contrived. Turning Red is certainly diversity done very well.