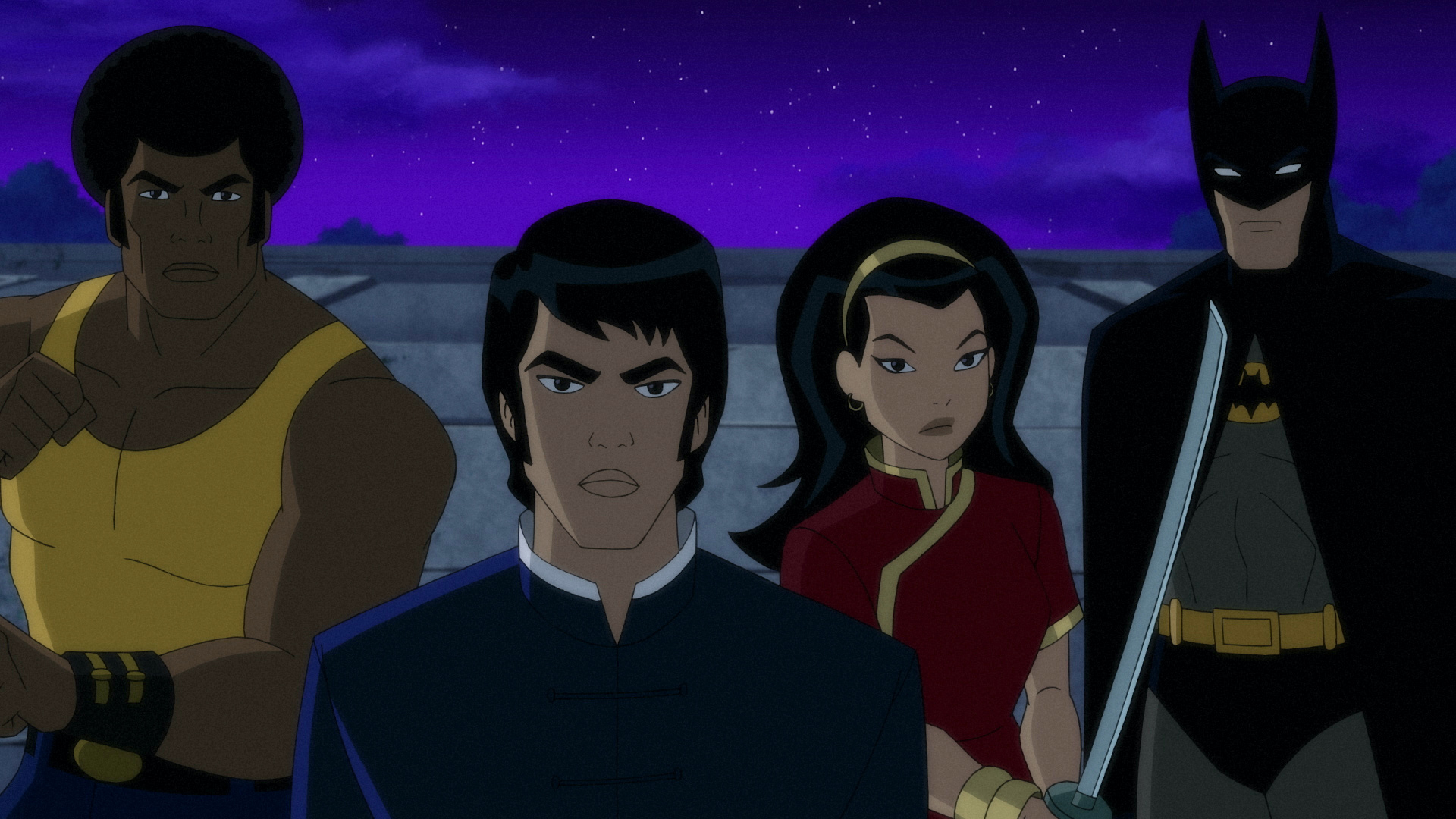 Batman: Soul of the Dragon is a perfect blend of superheroes, martial arts and fantasy storytelling. Admittedly, the concept behind the film resonates with me on a variety of levels. When Warner Bros. Home Entertainment announced the film last year, it sounded almost like a project made specifically to appeal to me. That can go both ways though, as I went into the film with extremely high hopes and a healthy amount of trepidation. Because of how much I love the film’s inspirations, like Bruce Lee’s iconic film Enter the Dragon, Batman: Soul of the Dragon was either going to be a film that I loved or hated.

Fortunately, I absolutely loved it. The film far exceeded my already lofty expectations, with a nostalgia infused, action-packed martial arts story that I think fans of Batman and martial arts will thoroughly enjoy.

Batman: Soul of the Dragon is out today on digital and on 4K Ultra HD Blu-ray Combo Pack and Blu-ray on January 26, 2021! Spoilers below!

Set in the midst of the swinging 1970s, this Elseworlds adventure finds Bruce Wayne training under a master sensei. It is here that Bruce, along with other elite students, is forged in the fire of the martial arts discipline. The lifelong bonds they form will be put to the test when a deadly menace arises from their past. It will take the combined efforts of Batman, world-renowned martial artists Richard Dragon, Ben Turner and Lady Shiva, and their mentor O-Sensei to battle the monsters of this world and beyond!

In a 1970s setting, Richard Dragon is an expert martial artist who, along with a group of elite students that included Bruce Wayne, Shiva and Ben Turner (Bronze Tiger), was trained by O-Sensei. O-Sensei had also been protecting a mystical gate that stood between their reality and one with evil demons.

The film flashes back and forth from the “modern” ’70s setting to the past when the four were students. During that time, in addition to the four primary protagonists, Rip Jagger (voiced by Chris Cox) and Jade (voiced by Jamie Chung), were also part of O-Sensei’s exclusive group. Richard Dragon was the longest tenured student (it’s unclear whether this was a good or bad thing), and Shiva was by far the star pupil. As part of their training, O-Sensei revealed to his students a magical sword, the Soulbreaker, which was the key to protecting the gate, and entrusted Shiva with the responsibility of taking care of the sword. Unfortunately, Rip stole the sword, opened the gate, and killed Jade in the process. After a battle with monsters, O-Sensei sacrificed himself by walking through the gate to close it.

That tragic event fractures the students, and the four go their separate ways. Fast forward to the 1970s and Richard Dragon is tracking a villainous group called the Cobra Cult (a perfect name for a group of ’70s bad guys), led by a mysterious man named Jeffrey Burr (voiced by Josh Keaton), who have taken control of the magical gate. Dragon runs into Bruce Wayne, easily discovers his secret identity, and enlists his aid in tracking down these villains. The two know they need to find Shiva, who still has the Soulbreaker sword, but who has descended into a world of crime. The Cobra Cult steal Stormbreaker, prompting Shiva to join Dragon and Batman.

Finally, the group goes to find the last remaining student, Ben Turner/Bronze Tiger, who is now teaching hand-to-hand combat to students of his own. Reunited, the four O-Sensei proteges attack the Cobra Cult’s compound, intent on redeeming themselves and validating their old master’s sacrifice.

After an epic battle that has to be watched to be fully appreciated, our four heroes defeat the Cobra Cult, but the magical gate is reopened. In what feels like a cliff hanger ending, the four walk through the gate, confident that they can face the evils on the other side together.

Although this filmed is understandably framed as a Batman story, it’s surprisingly very much a true ensemble film. If anything, Richard Dragon and Shiva are two of the most well developed and interesting characters in the story. Batman, whose very presence in any story often comes with a substantial shadow, actually blends well with the group, and even serves in a supporting role in some instances.

The plot is not overly complex, but the joy is in the characters and their relationship to one another. Martial arts stories are replete with training flashbacks, and Batman: Soul of the Dragon utilizes those scenes well. We see each of the students approach O-Sensei’s training from different perspectives, reflecting their varied personalities. Later, when the four are reunited after the shared trauma and fractured relationships, there are genuine moments of warmth between the characters. All those scenes make the eventual team-up and climactic battle emotionally satisfying.

In addition to the story, the voice cast is absolutely brilliant. Each of the cast members could play their characters in live-action, giving the film an authenticity that many animated films lack. Their characters are also generally well fleshed out, avoiding the typical pitfalls of stereotypical behavior. Richard Dragon in particular is shown to have swagger and sarcasm and intelligence. Much like his real life inspiration Bruce Lee, Dragon didn’t just seek out fights. There’s a great moment early on where Dragon can easily beat down an abrasive bouncer, but instead he uses some cleverness to safely incapacitate him. I loved that director Sam Liu and the writers made it a point to highlight Dragon wanting to avoid a fight if possible.

Finally, a critical element of any martial arts film are the action sequences, and Batman: Soul of the Dragon offers exceptional fight scenes that strikes the right balance between realism and entertainment. I often find that with animated stories, the fight scenes are overly exaggerated to the point of being simply unbelievable. That’s fine if I’m watching Dragonball Z, but not great when it’s a more grounded story. Happily, the action sequences in Batman: Soul of the Dragon were pitch perfect.

While Batman: Soul of the Dragon is truly an ensemble film, if there’s one characterization that is weaker than the rest, it’s that of Ben Turner/Bronze Tiger. Turner gets less to do in the script than the other three, and his character bordered on stereotypical at times. While the film is clearly inspired by Bruce Lee’s Enter the Dragon, with Turner playing the Jim Kelly role, I wished that Turner was a bit more well-rounded and developed. But that’s what a potential sequel is for!

In a Batman story, Richard Dragon, rightfully race-bent from comics into an Asian-American character, and voiced by Mark Dacascos, is front and center. Shiva, another Asian character voiced by Kelly Hu, also plays a hugely prominent role. Centering two Asian characters, voiced by two Asian actors, in a story with a character like Batman is unprecedented. I truly hope that using Batman as a catapult, Dragon, Shiva and even Bronze Tiger, will generate more interest in the comic book world.

Beyond the incredible voice cast, the film was directed by veteran director Sam Liu, whose extensive credits include some of the best and most popular DC Animated films in recent years, including Superman: Red Son, Justice League vs. the Fatal Five and Batman: The Killing Joke, and many others. It’s exciting that Liu was not only the obvious choice to direct this film based on his filmography, but that as an Asian-American director, he could add to the authentic voice of the film.