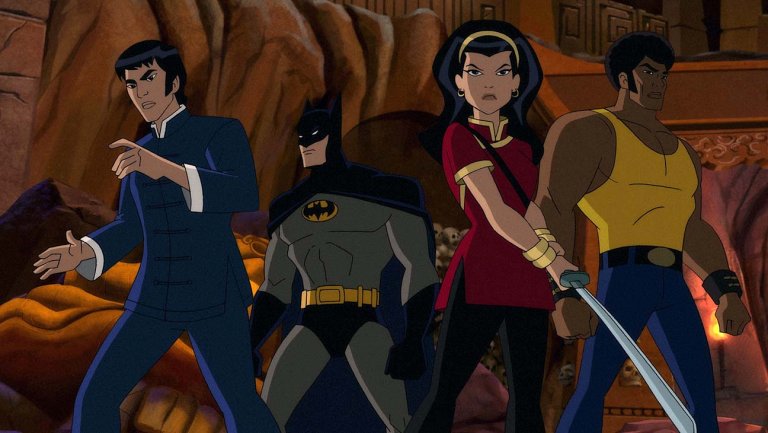 Batman: Soul of the Dragon is an upcoming Batman animated film set in the 1970s and inspired by Bruce Lee’s iconic film Enter the Dragon. The Hollywood Reporter revealed the star-studded voice cast for the film, including David Giuntoli as Batman, Kelly Hu as Lady Shiva, Michael Jai White as Bronze Tiger and James Hong as O-Sensei. In a pleasant surprise, it looks like the film is going to be race-bending Richard Dragon, who in the comics is a white martial artist, as Mark Dacascos will be voicing the character. In the promotional screenshot shared below, Richard Dragon looks very much to be an Asian character, and indeed looks like a cartoon Bruce Lee!

According to THR, the film features an original story (not adapted from an existing comic) where Batman is faces “a deadly menace from his past with the help of three former classmates: world-renowned martial artists Richard Dragon, Ben Turner and Lady Shiva.” The legendary Bruce Timm, of Batman: The Animated Series, is executive producing, and Sam Liu (Reign of the Superman and Batman: The Killing Joke) is directing and producing. This project was first reported exclusively by Geeks WorldWide back in June.

There’s a lot of awesomeness to unpack here. First of all, this might the largest Asian voice cast of any of the major DC animated films. Just that image alone, where we see Batman surrounded by 3 diverse characters, is epic. Kelly Hu and Michael Jai White are such good fits for their respective characters that you could cast them as live-action counterparts right now. Having James Hong as O-Sensei is absolutely perfect. In the comics, O-Sensei is a Japanese martial arts master who lives to be 150 years old and trains Richard Dragon.

Which of course brings us to Richard Dragon. Race-bending any character is controversial. Many comic fans balk at such changes because it’s so different from the source material. But considering that comics, like all media, have a history of racially insensitive characters, I always appreciate when a character is updated in a new medium. Bruce Lee’s Enter the Dragon premiered in 1973, which is when the martial arts phenomenon blew up in the United States. Obviously Bruce Lee was the reason for much of that rise in popularity. It’s no surprise then that martial arts characters in comics started appearing around that time as well. Richard Dragon was created in 1974 and Bronze Tiger and Lady Shiva both first appeared in Richard Dragon, Kung Fu Fighter in 1975. Marvel comics got in on the action too, creating Shang-Chi in 1973 and Iron Fist in 1974. You can see the trend here.

Martial arts characters in comics are great. And it’s completely fine to have martial artists of all kinds of ethnicities. But over the years, Asian culture has too often been appropriated in western media, with a white protagonist taking on Asian aesthetics and battling Asian villains. That’s why way back in 2014, The Nerds of Color’s Keith Chow lobbied hard for Marvel and Netflix to cast an Asian-American as Iron Fist. That didn’t quite work out (and given the quality of that show, we might all be better off for it), but Chow’s reasons for wanting that change still stand.

Richard Dragon shares a similar general background to characters like Iron Fist in the sense that he is a white protagonist who is trained by an Asian master and becomes one of the greatest (if not the greatest) martial artist. In a vacuum, there’s nothing wrong with that kind of story on its face. Unfortunately, that kind of story has been told ad nauseum in western media to the point where it’s now a common trope of the white protagonist being better at Asian martial arts than Asians are and beating up on evil Asian villains. Comics are full of characters inspired and even taught by Asian characters, but lack actual Asian superheroes.

Given all that, it’s exciting to see DC potentially take a positive step towards increased Asian representation in its stories with this change for Richard Dragon. Of course, we still know very little about this film, but DC’s animated slate has long been lauded as some of the very best comic adaptions, so I have faith that this will be a fantastic story.

Batman: Soul of the Dragon is currently scheduled to be released in 2021 and I’ll be keeping a very close eye as more information is released!

In one of the most hilarious film promotional videos ever, Dwayne “The Rock” Johnson and Kevin Hart, stars of DC League of Super-Pets, accepted...