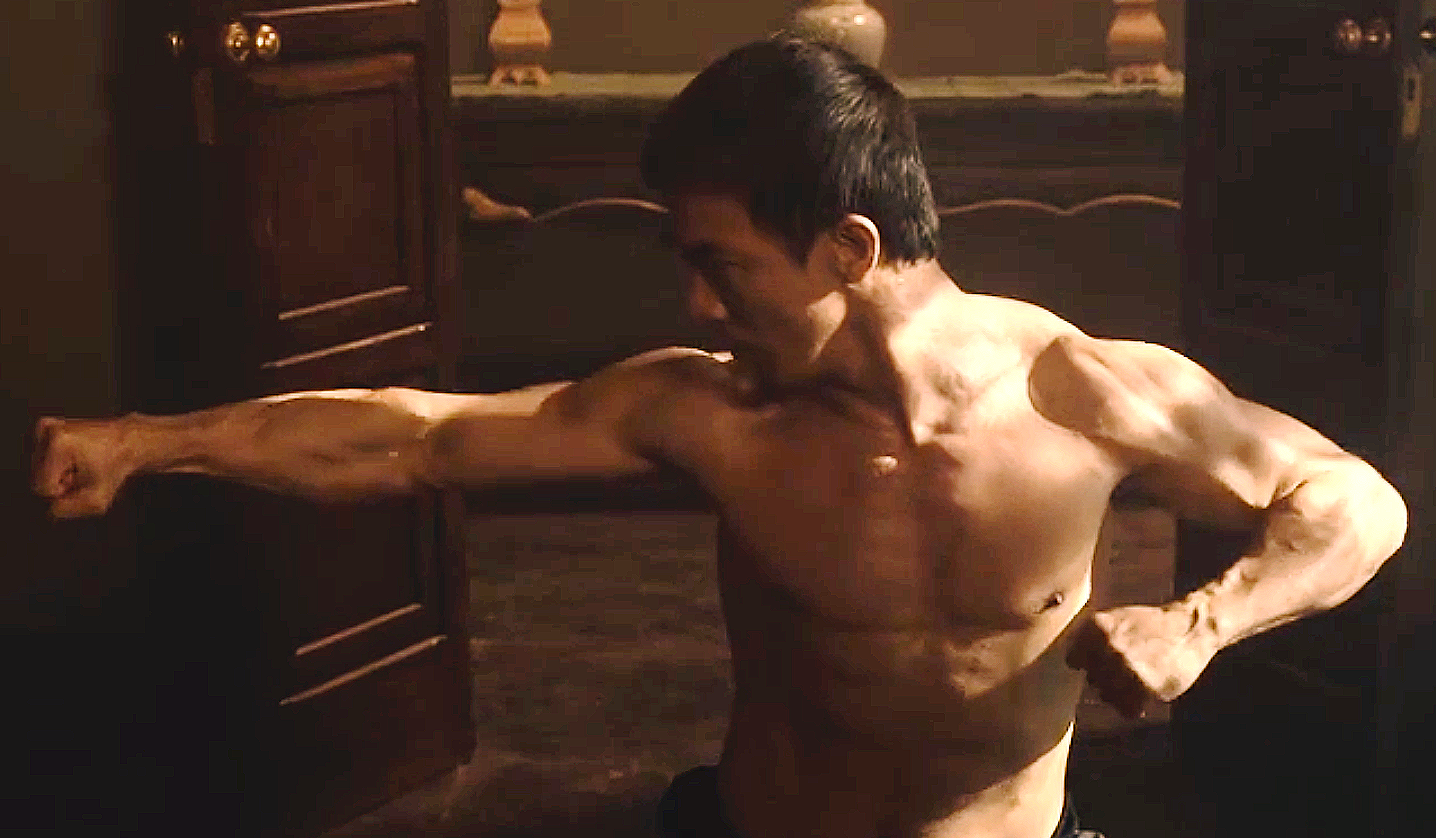 Joe Taslim might be the closest thing we have to Bruce Lee today. The mid-season episode, titled “Not for a Drink, a F*ck, or a G**damn Prayer,” was the most action-packed episode of the season and a true high-water mark for martial arts excellence on TV. In an episode that featured an incredible martial arts fight set in the lair of the Fung Hai, no star shined as brightly as Joe Taslim. My goodness that man is amazing. Over the course of my interviews with several cast members from Warrior, I regularly ask who the biggest badass is amongst the cast full of talented martial artists and athletes. There’s always been only one answer – Joe Taslim. Everyone from Andrew Koji to Jason Tobin and even newcomer Chen Tang says Taslim is a true martial arts superstar, and we had the honor of watching him in rare form here. What an awesome episode. Spoilers below!

The various storylines this episode are much more clear cut. Li Yong and Chao finally hatch their plan to get back at Zing and the Fung Hai, with the help if Bill, Lee and the San Francisco Police Department. First Chao goes to the Fung Hai lair to deliver Zing’s order of knives. One of Chao’s men happens to be Li Yong in disguise. He’s there to plant a blade and pocket watch which will implicate Zing for the murders of the White Chinatown businessmen. Of course, the plan doesn’t go as smoothly as planned, as Zing senses something is off and the Fung Hai eventually discover Li Yong. The viewers benefit most from this discovery, as what follows is one of the finest martial arts action sets in TV history. Li Yong takes on all comers, leading to the fight we’ve waited all season for – Joe Taslim’s Li Yong vs. Dustin Nguyen’s Zing. After a scintillating duel, the San Francisco PD bust in, and Bill gets to exact some revenge of his own after Lee shoots Zing in the shoulder. Li Yong manages to escape, but the SFPD have their man. Bill presents the blade and pocket watch to their chief, who admits that the evidence seems solid. Lee however isn’t quite convinced at how they got so lucky in solving their biggest case this way. It doesn’t seem like Lee’s going to accept their seeming serendipity, but for now, they’ve won.

Elsewhere, Ah Toy finally takes Davenport up on her offer to visit her haven in Sonoma. She marvels at how many saved Chinese women are living and working together with Davenport. At first, I cringed again as the optics seemed a bit too close to slave labor, but Davenport makes it clear that all the women are there for each other, and they’ll have the fruits of their labor to continue to live off of even after she dies. Ah Toy is overwhelmed and runs off, which leads to an intimate moment where Davenport chases after her and the two women kiss passionately. This is the second example of LGBTQ representation on the show this season (the first being Chen Tang’s character Hong, who is gay).

Ah Sahm, Young Jun and Penny Blake have to deal with the fallout from Leary’s bombing of Mercer Steel. First Penny finds out that Ah Sahm and the Hop Wei had been using her factory to stash their opium. She’s furious at Ah Sahm and demands that he leaves. She’s later visited by her dear old husband, Mayor Blake, who tells her that if Mercer Steel can’t deliver on the promised product on time, she will lose the City contract. Penny finds herself once again at her husband’s mercy and begs for some understanding, to which Mayor Blake says simply, “It’ll be good to have you home again, dear.”

For Ah Sahm and Young Jun, the stakes are even higher, as they’re now out of money and drugs and they need to keep Father Jun from finding out what they’ve been scheming about. Ah Sahm says he’ll figure it out and Hong interrupts by declaring he’s in to help. While Ah Sahm and Young Jun are incredulous, Hong seems to have deciphered everything they’ve been up to and reassures them that they’re his best American friends. Hong’s unbridled glee is so enjoyable and a very welcome addition to the show. Ah Sahm first goes to Happy Jack to see if he’ll provide an advance on a new batch of drugs, but gets rejected. He then turns to Ah Toy for a loan, but when she realizes that Ah Sahm is scheming to take over the Hop Wei, she refuses to get involved and warns him that his plans are a danger to Chinatown.

Mai Ling is haunted by the guilt of ordering Ah Sahm’s death in season 1. Everything else is going well for the Long Zii under her leadership, but she remains troubled. When she finds Li Yong tending to his injuries from his fight with Zing, he tells her that Zing has been arrested. Mai Ling is furious that he moved against an ally without her approval and rebukes Li Yong’s affection. How much longer before Li Yong decides that he’s had it with Mai Ling, or vice versa?

Possibly soon, because Mai Ling later goes to the underground fight club to see Ah Sahm. She confesses that she’s riddled with guilt over her decision and that she made a mistake. She tells Ah Sahm that she wants her brother back, but Ah Sahm isn’t having it. He says that her brother died that night and he’s going to destroy everything she cares about.

As we reach the middle of the season, Chao takes his daughter away from her mother and delivers her to Davenport. He asks her to help make sure that his daughter gets the life he could never have in America. Finally, Ah Sahm needs money and has nowhere else to go, so he turns to Vega and agrees to the high stakes tournament that she mentioned way back in the season premiere. If you don’t think that tournament is going to be epic, you haven’t been paying attention.

Joe “Bruce Lee” Taslim – There’s obviously nobody who can be everything Bruce Lee was, but Joe Taslim sure did an incredible job channeling the martial arts legend this episode. Everything from sneaking into the Fung Hai lair in a ridiculous disguise, reminiscent of Fist of Fury, to his bouncing around during his fight with Zing, and even the shot of him shirtless with cuts a la Enter the Dragon, screamed Bruce Lee. But beyond all of those obvious references, Taslim’s incredible athleticism, his screen presence and charisma were as much of an homage to Lee as anyone could possibly ask for. Watching Taslim was such a treat in this episode. What a superstar.

Underused Young Jun – As I’ve mentioned before, Young Jun is my favorite character on the show. His bombastic personality was the highlight of season 1 for me, and I was extremely excited to see Young Jun continue to develop this season. Unfortunately, he’s been mostly underutilized thus far, with Ah Sahm taking a larger role in the Hop Wei scheme and characters like Zing and Li Yong stepping more into the spotlight as well. The inevitable byproduct of having such a wonderful cast is that not everyone can get as much shine as they deserve, but I really hope there are greater plans for Young Jun. Jason Tobin is a fantastic actor and he steals nearly every scene he’s in. The season is careening towards a confrontation for control of both the Long Zii and the Hop Wei, and I hope Young Jun doesn’t take a back seat.

There was a poignant moment where Chao is desperately trying to convince Davenport to take his daughter, when she asks what his daughter’s name is. He gives his daughter’s Chinese name and Davenport mishears and asks, “Hannah?” Chao pauses for a moment and confirms “…Hannah.” It’s a small moment but really struck me as an example of what so many immigrants have gone through when “Americanizing” their names. I love that the Warrior writers put that moment in there.