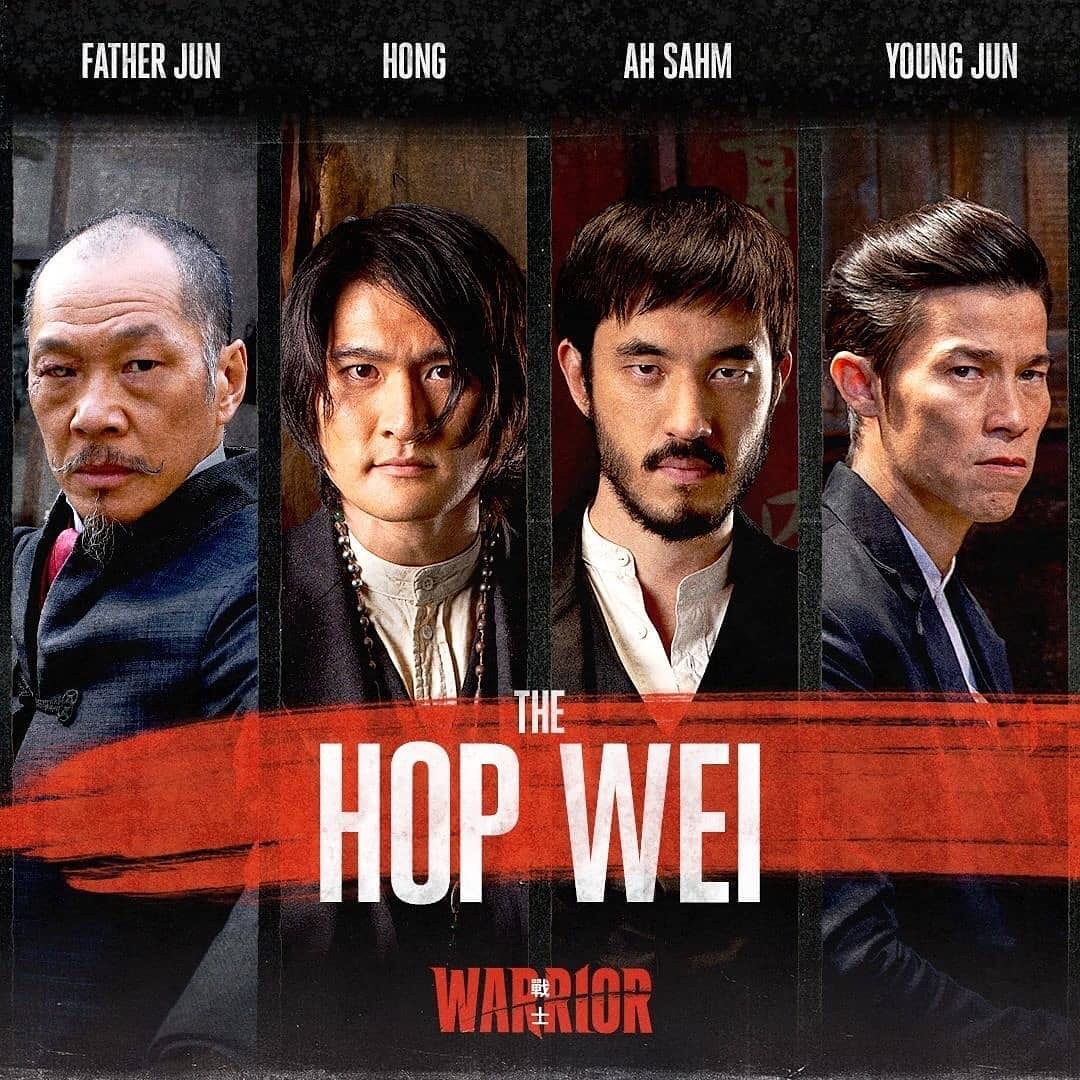 The greatest martial arts show on TV is back. The sophomore season premiere, titled Learn to Endure, or Hire a Bodyguard, reminds viewers why there’s never been a show quite like Warrior.

Cinemax’s Warrior, based on the writings of martial arts icon Bruce Lee, and executive produced by Bruce’s daughter Shannon Lee, Justin Lin and Jonathan Tropper, was one of the main inspirations for this site. Once I heard that a show like Warrior was in development, I knew I had to cover it. Last year, for the series premiere, I wrote in detail about the history behind the show’s development, and why Warrior represents a redemption for Asian-Americans in media. Oh, and on top of all that, it’s also an action-packed, hugely fun show.

In my interview with Executive Producer and Showrunner Jonathan Tropper, he called season 2 the “Empire Strikes Back of the show” because it was darker and more focused on character development. That comment reflects the true genius of the show. Many audiences would think that a show inspired by Bruce Lee would be a purely martial arts epic, but much like the legend himself, Warrior is very layered. Indeed, for this second season, the exceptional martial arts is possibly surpassed by the Scorsese-like drama and intrigue.

Below is my recap and review of season 2, episode 1, Learn to Endure, or Hire a Bodyguard.

The season drops viewers in the middle of an underground fight club with Ah Sahm (Andrew Koji) fighting some large angry screamer. We don’t need to know his name because he’s only there to get punched in the face. The thing that pops out immediately is that Koji is absolutely shredded. What a specimen! Jonathan Tropper mentioned in our interview that Koji spent a lot of time between season 1 and 2 training (more on that in the near future!), and it shows. After Koji dispatches screaming guy, he’s paid by a woman named Rosalita Vega (new series regular Maria-Elena Laas). Vega has a relaxed confidence that’s a nice contrast to Ah Sahm’s quiet intensity. Will she be a new love interest? She seems to understand Sahm, telling him that whatever he’s really looking for by taking on these underground fights, “I’m your girl. Whatever it is, I’m betting I can help.” Ah Sahm responds defiantly, “I don’t need any help.”

Cut to Ah Sahm’s Irish adversary, Dylan Leary (Dean Jagger), who’s standing over the gravestones of his family. There he also meets a newly introduced character, Sophie (Celine Buckens) who lends a sympathetic ear. We get a bit of backstory on Leary, who apparently lost his wife and kids to a sickness.

Back at Ah Toy’s (Olivia Cheng) brothel, she and Lai (Jenny Umbhau) are tending to Ah Sahm’s injuries. Despite his previous claim that he doesn’t need any help, Ah Sahm would clearly be dead if not for Ah Toy’s care. Ah Sahm didn’t get the fighting out of his system as he’s apparently joined Ah Toy’s secret crusade against white racists, and now wants to go take on some “Teddy Boys” who take Chinese scalps as prizes.

Next we’re reacquainted with the rest of the main players. Big Bill O’Hara (Kieran Bew) is shaking down his fellow white man on behalf of the Fung Hai due to gambling debt. Mayor Samuel Blake (Christian McKay) and his wife Penelope Blake (Joanna Vanderham) are bickering over Penny taking over her father’s steel company (he died last season) and using Chinese labor. Surprise, Leary admirer Sophie is Penny’s sister! That won’t get messy at all.

Speaking of messy, we finally see Mai Ling (Dianne Doan) and Li Yong (Joe Taslim) taking a stroll through Chinatown. Thanks to Yong’s win over Ah Sahm last season, their Long Zii Tong are now power players in Chinatown. It’s not all malevolence though, as Mai Ling buys out the whole stock of produce from a local vendor so the Chinese couple can close up shop and get the medical help they need. That brief exchange is enlightening, as we see that the locals respect Mai Ling and that she cares for her fellow Chinese. That warm and fuzzy moment is interrupted by Young Jun (Jason Tobin) and Ah Sahm. The two pairs stare at each other with barley concealed venom and Young Jun spits on the floor in disgust. Joe Taslim is so incredible in these scenes. Li Yong doesn’t talk much, but Taslim’s facial and physical acting is so emotive.

At City Hall, Mayor Blake and his smarmy Deputy Mayor Buckley (Langley Kirkwood) are bickering over Penny’s decision to hire Chinese workers. As we saw last season, Buckley’s goal is to continue to manipulate the Mayor into further restricting the Chinese in San Francisco.

The Hop Wei aren’t getting along either. Young Jun is angry that Father Jun (Perry Yung) agreed to the season 1 duel with the Long Zii and lost territory. Father Jun preaches patience but Young Jun won’t have it and pops off until the elder Jun has to lay the smackdown on his son.

We can’t forget that there’s a third major Tong in the picture, the Fung Hai, led by Zing (the legendary Dustin Nguyen). Zing is such a delicious villain; condescending and arrogant. Big Bill wants to stop working for him, but Zing knows that he has no choice. Bill needs and likes the money.

Mai Ling and Ah Sahm run into each other again to pay respect to their dead parents. Ah Sahm is bitter that Mai Ling gave the kill order during last season’s duel. Sahm tells her, “You made your choice, now I’ve made mine.” It seems Ah Sahm has his sights set on taking over the Hop Wei, setting up a true sibling rivalry. Mai Ling walks away, leaving behind Li Yong and Ah Sahm. Li Yong smiles mockingly and nods, silently asking how much Ah Sahm enjoyed the beat down. Ah Sahm responds sarcastically and motions for Li Yong to run along after his master. No words were exchanged in this, the best scene of the episode.

The Teddy Boys are in a warehouse beating a Chinese laborer. One of them berates the worker for “bringing diseases” and declares that “as a loyal American,” he’s sentencing the Chinese man to death by hanging. I don’t think I need to point out all the symbolism in this exchange. Fortunately, the Chinese Avengers show up and Ah Toy, Ah Sahm and Lai save the day with plenty of blood and gore.

The next day, Young Jun tells Ah Sahm that he’s discovered that the Long Zii are selling drugs for cheaper and undercutting the Hop Wei’s business. Young Jun wants to find a local buyer but knows that his father is too set on his connection to their Chinese drug suppliers. Ah Sahm and Young Jun agree to find a local source behind Father Jun’s back.

Meanwhile, the Chinatown police are getting increasingly aggravated about the murders. There are white people dying and they can’t have that! In the hope of getting some leads, Bill and Lee (Tom Weston-Jones) head to Chao’s (Hoon Lee) and take his illicit merchandise. Chao doesn’t betray his people, but the man knows seemingly everything and later tells Ah Toy to back off until things calm down.

Back at Penny Blake’s steel factory, her Chinese laborers are getting assaulted by the angry white workers. They need security. She probably knows someone who can help.

As the episode ends, Ah Sahm turns to Vega for a lead on a local drug supplier, Mai Ling and Li Yong share a really nice, intimate moment in bed talking through her frustrations with Ah Sahm, and Leary blows up a business that presumably has been using Chinese labor.

Tension – Come for the ass kicking action, stay for the scintillating tension! The scene where Young Jun and Ah Sahm run into Mai Ling and Li Yong on the street was beautifully intense. Joe Taslim shines. If you only saw the dark silhouette of Li Yong, and you’d know immediately to turn and run the other way. We all know that Ah Sahm and Li Yong have to have a round 2 sometime this season and the buildup to that point is going to be juicy!

Familiarity – Its clear that this already incredible cast really understands their characters now. In my interview with Jonathan Tropper, he talked about how the actors have lived with their characters for 10 episodes, allowing them to add to the development of their characters in season 2. That process is reflected in the ease with which they play their roles this season. We can see this in Andrew Koji. His movements throughout and the comfort with which he delivers his lines show that he’s no longer the new guy, both in universe and out. The familiarity extends to the audience as well. We know this world that they’ve created now and can focus more on the drama and tension between the characters.

Costumes – How amazing do Olivia Cheng’s Ah Toy and Dianne Doan’s Mai Ling look? Their new threads are nothing short of spectacular and are appropriate for these two incredible characters. The Hop Wei already looked slick in their Armani suits last season, but the costuming department really stepped it up this season. There’s a genuine feel of royalty balanced with grittiness that these costumes have and it’s truly impressive.

Chinese Avengers – Don’t get me wrong, I would pay Disney+ Premium rates to watch a movie starring Olivia Cheng, Andrew Koji and Jenny Umbhau as crimefighters chopping up racists. But the way that scene played out was a bit out of place in the context of this episode. It was fun, but seemed to lean too far into the superhero trope to fit into this gritty Chinatown world we’re living in. Also, we went from teases of Lai’s abilities last season to her playing Robin to Ah Toy’s Batman? Seems like a big leap that should have been developed more on screen.

Young Jun is my favorite character on the show because he most represents the Asian-American diaspora experience. Young Jun is a Chinese man who grew up in America, and he wants to blaze his own trail, but feels held back by his father’s commitment to the Chinese ways. In this episode, the tension authentically reflects the struggle that many second generation Asian-Americans have with their parents. They want to embrace new methods and think western ways are better, but struggle against what they believe is their parents’ foolish dedication to the old ways.