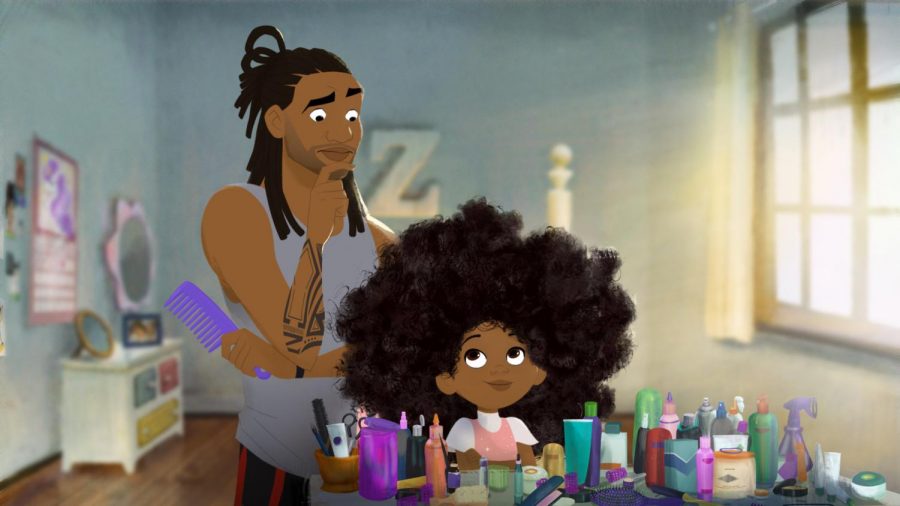 HBO Max announced today that it has ordered a 12-episode 2D animated series called Young Love based on the animated short film, Hair Love by Matthew A. Cherry, which won the Academy Award for Best Animated Short Film this year. Hair Love itself was based on the best-selling children’s book by the same name also written by Cherry. The book was published just last year in 2019 and has enjoyed a well deserved meteoric rise. It’s unique to see a project release as a book and watch its creator shepherd over its various evolutions over a short time. It’s truly a shining example of how a diverse creator can navigate the industry successfully.

You can watch the full Oscar winning short below and the press release from HBO Max follows. Also noteworthy is this tweet below by the creator. So if you’re a Black voice over actor, reach out to him!

Dear Black voice over actors…#YoungLove, a new animated series which is based on the characters from our Oscar-winning animated short film #HairLove, is now open for business at @hbomax https://t.co/cGPsJhUiuY

LOS ANGELES – July 7, 2020 – HBO Max has ordered a 12-episode season of the all-new, 2D animated series, Young Love, based on the characters introduced in the Academy Award®-winning short film, Hair Love from Oscar® winner Matthew A. Cherry and Sony Pictures Animation. The new series for HBO Max is created by Cherry, who will showrun with long-time animation creative Carl Jones (The Boondocks, Black Dynamite). The series will be executive produced by Blue Key Entertainment’s Monica A. Young (producer of Hair Love) along with Lion Forge Animation’s David Steward II and Carl Reed.

Hair Love centers around the relationship between an African-American father, his daughter Zuri, and the most daunting task a father could ever come across – doing his daughter’s hair for the first time. The short resonated with people everywhere, especially fathers who found themselves in similar situations.

The all-new animated series Young Love expands on the family introduced in Hair Love. Filled with comedy and heart, Young Love is an honest look into the world of the Young family – including millennial parents Stephen and Angela, their daughter Zuri and her pet cat Rocky – as they juggle their careers, marriage, parenthood, social issues, and multi-generational dynamics all while striving to make a better life for themselves.

“Hair Love struck a chord that is still resonating deeply with audiences of all ages,” said Billy Wee, SVP, Original Animation, HBO Max. “Matthew and Sony Animation’s creative voices are a welcomed addition to the HBO Max family and we can’t wait to bring this joyous story to the world.”

“I am beyond excited to continue telling the story of Stephen, Angela and Zuri and further explore the family dynamics of a young Black millennial family we established in our short film Hair Love as an animated series,” said Cherry. “Couldn’t ask for better partners in Sony Pictures Animation and HBO Max in helping us get Young Love out to the world.”

Said Karen Rupert Toliver, executive vice president of creative for Sony Pictures Animation and Oscar-winning producer of Hair Love, “It’s a privilege to continue our partnership with Matthew Cherry, who has a gift for tapping into meaningful stories that touch our hearts. I personally can’t wait to collectively laugh and cry with the Young family.”

About Sony Pictures Animation
Sony Pictures Animation produces a variety of animated entertainment for audiences around the world. The visually groundbreaking and critically acclaimed “Spider-Man™: Into the Spider-Verse” is the studio’s latest release, and the winner of the 2019 Academy Award® for Best Animated Feature. The division is also behind hit film series such as “The Smurfs,” “Cloudy with a Chance of Meatballs,” and “Hotel Transylvania.” Next for Sony Pictures Animation are the original feature comedy “Connected” produced by Phil Lord and Christopher Miller, and the studio’s first-ever animated musical “Vivo,” featuring original songs by Lin-Manuel Miranda.

About Lion Forge Animation
Lion Forge Animation is a media company that creates animated content that challenges expectations and reflects the diversity of modern viewing audiences. The culturally significant and critically acclaimed short “Hair Love” was the studio’s first release, and won an Academy Award® in 2020, for “Best Animated Short Film.” Founded in 2019, Lion forge Animation is a subsidiary of Polarity, a diversified global media company established in 2018 by David Steward II.

About Matthew A. Cherry
Matthew A. Cherry, writer, co-director and producer of Hair Love won his first Academy Award® for Best Animated Short in 2020. He also authored the New York Times Best Selling picture book which was inspired by his short film. Cherry began his entertainment career in 2007, after playing wide receiver in the National Football League. He worked as a production assistant on more than 40 commercials, and then earned his first directorial credit in 2008 on a music video featuring R&B artist Terry Dexter. He went on to direct more than 20 music videos for a wide variety of artists, including Michelle Williams featuring Beyoncé & Kelly Rowland, Snoop Dogg, Chloe x Halle, and many more. His first feature film, “The Last Fall,” debuted at the South by Southwest (SXSW) Film Festival in 2012. His follow-up feature, the innovative “9 Rides,” which was shot entirely with an iPhone 6s, premiered at SXSW in 2016. Cherry’s additional television credits include directing episodes of “Black-ish,” “Mixed-ish,” “The Unicorn,” “Saved by the Bell” and “The Last O.G.”

About Carl Jones
Carl Jones is best known for his work as co-executive producer of “The Boondocks” (Adult Swim), the first Cartoon Network program to win a Peabody Award and be nominated for a NAACP Image Award and executive producer and head writer of “Black Dynamite” (Adult Swim). Additionally, Carl co-created “Freaknik The Musical” (Adult Swim) and produced and wrote two seasons of “Legends of Chamberlain Heights” (Comedy Central). Carl wrote for “The Jellies!” (Adult Swim) starring Tyler The Creator and recently wrapped “The Last OG” season 3 (TBS) as showrunner.