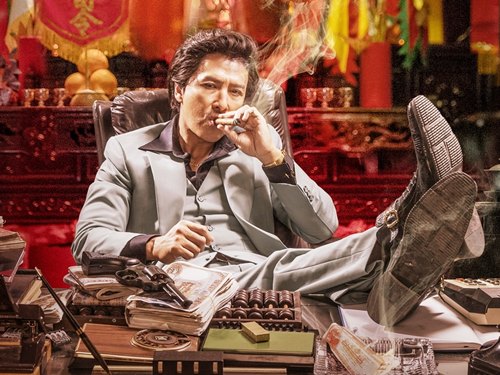 Donnie Yen as Crippled Ho in Chasing the Dragon

Peter Luo, CEO of Starlight Media which is financing the film, told Deadline that Yen was the only candidate to star in the film.

“The talents of Donnie are undeniable and will be utilized in every imaginable way to bring this epic story to life,” Luo said. “Spanning the continents of Asia, North America and South America, Golden Empire is really the first major narco film with an Asian lead that plays to global audiences. Showcasing diversity in cinema, while retaining authenticity, has always been a primary focus of ours, and this unique and fascinating story is representative of our mandate.”

This is an interesting choice for Donnie Yen, who recently announced on Instagram that he has begun preparing for another U.S. film, Sleeping Dogs, based on the hit video game. Yen played a somewhat similar role as Crippled Ho in the 2017 film Chasing the Dragon with Andy Lau. However, following that film, Yen declared that he would no longer play villain roles. As reported by The Epoch Times via Yahoo! News, Yen said that playing the primary villain in Chasing the Dragon was difficult for him and he wanted to send positive messages to his fans and children.

“The role seriously affected me. Every day I would go home and look into the mirror to cleanse my state of mind. And then I will get into character again every morning. I was living two different lives for several months,” he said.

“I am a father. What would my children and their friends say? I don’t want children to watch this movie. I don’t want them to learn anything bad from my character,” he added.

Despite Yen’s previous comments, I can understand the change of heart with this film, which seems like a unique project. I can’t even fully wrap my heard around a U.S. film about a Chinese-Mexican drug lord. Yen has always expressed his desire to continue to grow as an actor, and this role certainly seems like it would stand apart from his past performances.

I’m a huge fan of Donnie Yen’s and I’m excited to see him star in another U.S. project. Yen has long been under-appreciated by western audiences and it seems in the past few years he floats back and forth between U.S. and Hong Kong films. Between Golden Empire and Sleeping Dogs, I’m looking forward to Yen enjoying more of a spotlight in the west.

The Implications of Disney’s ‘Mulan’ Premiering on Disney+

Disney’s live-action Mulan had a glamorous red-carpet world premiere way back on March 10th in Hollywood. It was set to be released worldwide just...

Review: Ip Man 4: The Finale is an Emotional End to an Iconic Saga

It’s fitting that as this decade comes to a close, we’ve seen the (temporary) conclusions of blockbuster franchises like Avengers and Star Wars (at...