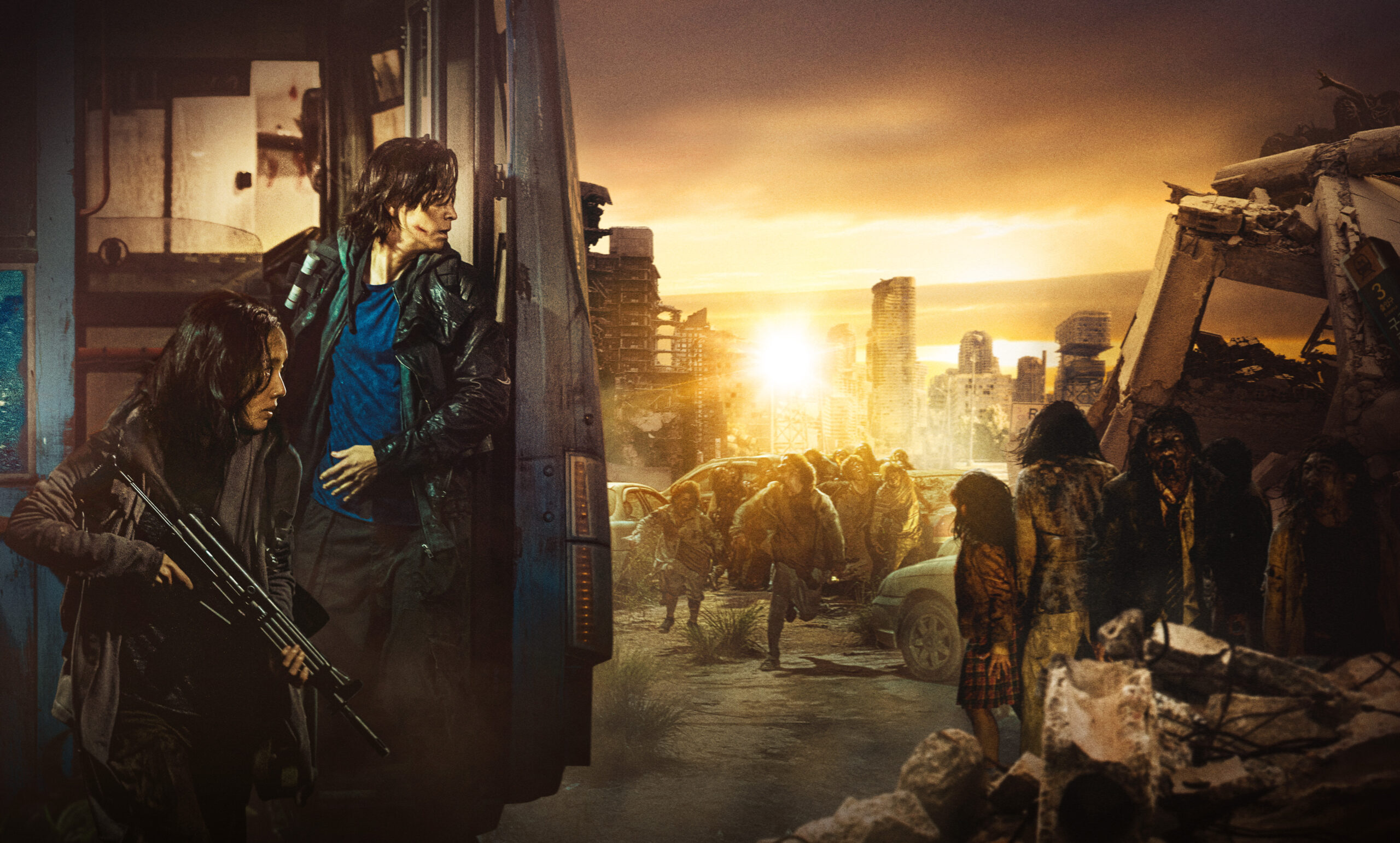 The original Train to Busan was a claustrophobically intense zombie flick that kept your heart pounding by the frenetic speed of the zombies chasing after the protagonists. The follow up, Train to Busan Presents: Peninsula, takes place four years after the original, both in universe and in real time, and shows us what South Korea looks like in the aftermath of the zombie outbreak.

The first thing worth noting is that Peninsula isn’t really a zombie film. Sure zombies are prevalent throughout, but the main plot has little to do with the actual zombies, nor are they the primary antagonists. Instead, the film is more of a post apocalyptic heist film set in a world where zombies exist. You take a bit of Mad Max, mix it up with Fast & Furious, sprinkle in a bit of the The Italian Job, pour in a cup of zombie juice and you get Peninsula. It makes sense then that the marketing made it a point to note that Peninsula isn’t a direct sequel to Train to Busan. The characters are completely different. Much like how Master Z: Ip Man Legacy isn’t a sequel to Ip Man 3 (that would be Ip Man 4: The Finale), consider Peninsula to be a wholly separate story told in the same universe as Train to Busan. Spoilers below!

BRIEFCAP (Spoilers!)
The plot of Peninsula is straight forward. Dong-won Gang plays our hero Jung-seok, who was a captain in the South Korean military when the zombie outbreak occurred during the events of the original film. Jung-seok finds his sister, her husband and their son and takes them to a large ship filled with Korean refugees headed for safety. On the way Jung-seok is forced to coldly ignore other survivors begging for a ride, including a wife with a child. Although Jung-seok and his family make it to the ship, one of the other refugees turns out to be infected (surprise!), resulting in several casualties including Jung-seok’s sister and her son. Jung-seok and his brother-and-law, Chul-min (played by Do-yoon Kim) survive.

Flash forward four years and Jung-seok and Chul-min are refugees in Hong Kong, where they are guilt-ridden, ostracized and ridiculed. Then some greedy thugs recruit Jung-seok and Chul-min to go back to now quarantined Korea and recover a large amount of money that was abandoned during the apocalypse. This is their way to become rich themselves and create a better life going forward. Back inside Korea, they find the money but, shocking nobody, things go badly when a bunch of zombies show up. Jung-seok is saved by two kids (played Re Lee and Ye-Won Lee), who take him back to their home and introduce him to their mother Min-jung (played by Jung-hyun Lee) and an older man, Kim (played by Hae-hyo Kwon), who swears he has a contact who will come save them all. Twist! Jung-seok recognizes Min-jung as the mother who desperately begged him for a ride when he was driving his sister’s family to the ship.

Chul-min is captured by a larger group of surviving thugs living Mad Max style. There, one of the group’s leaders, Captain Seo (played by Kyo-hwan Koo), figures out the plan to snag the money and realizes that’s his way out of Korea. Jung-seok, Min-jung and her family hatch a plan to recover the money and save Chul-min so all of them can escape. Although they’re able to get the money and the satellite phone to contact their extraction, Chul-min is killed by the group’s lead thug Sgt. Hwang. Then it’s a literal race to the port as Jung-seok, Min-jung and the rest flee to salvation, tailed by Sgt. Hwang (played by Min-jae Kim) and his crew. After some seriously slick driving that would make Dominic Toretto proud, our heroes stave off the thugs and make it to the port. Just as they arrive, Captain Seo shows up, shoots old man Kim and takes off with the money to be saved…only once he gets there the Hong Kong group shoot him down.

It’s looking dire for Jung-seok, Min-jung and the kids, but in the last second, it turns out old man Kim’s contact was good, and a United Nations extraction team shows up to save them. For a second it almost looks like Min-jung is going to be sacrificed to save her kids, Jung-seok refuses to abandon her a second time and they all make it on the helicopter to apparent safety.

THE GOOD
Likable Leads – My biggest concern going into this film was whether this completely new cast would be able to fill the considerable shoes of the Train to Busan cast, which was led by Gong Yoo and Dong Seok Ma (Don Lee). Both Yoo and Ma are hugely popular in Korea and delivered excellent performances for the original film. Peninsula stars Dong-won Gang, Jung-hyun Lee, Re Lee and Ye-Won Lee and this make-shift nuclear family have such great chemistry and are so genuinely likable that you can’t help but root for them immediately. The two child actors, Re Lee and Ye-Won Lee, are particularly impressive as they find the perfect balance between endearing and intense. I often find that inserting major child characters into post-apocalyptic stories is a mis-step because it’s too challenging to constantly write around characters who rely completely on the protection of others. While Re and Ye-Won are young, the film found clever ways to showcase their talents and survival instincts, making them assets to the team.

Fast Paced Action – The original Train to Busan was zombie film intense in the sense that there’s a constant sense of dread as the protagonists run for their lives and there could be a flesh eating zombie around every corner. Peninsula is different in that the intensity comes from the action. While there’s still some of that lingering zombie dread, it becomes clear fairly early in the film that it’s not really about the zombies. Instead, it’s about the lunatic human survivors and some absurdly awesome car chases Fast & the Furious style. The climactic chase near the end of the movie is an adrenaline jolt with some genuinely innovative automative action. Just sit back and enjoy!

THE BAD
Not a Zombie Flick – As I’ve tried to emphasize above, Peninsula is less of a zombie film and more of an action film with some zombies mixed in for fun. And it is fun. But it takes a bit of mental adjustment to recognize that this film isn’t exactly what most are probably expecting. Not only is it a follow up to one of the best zombie films ever, but the first 10 minutes of Peninsula features a terrifyingly excellent zombie scene. However, once the film takes the 4 year time jump, it really becomes more of an action film. For those hoping for another classic zombie movie, I think there’s the potential for disappointment. When you go to In-N-Out, you’re expecting a burger. If they serve you a chicken sandwich, it might be a delicious chicken sandwich, but the expectations could impact your experience.

Cartoonish Villains – As much as the leads of Peninsula are genuinely likable and easy to root for, the villains are a bit too cartoonish to take seriously. Sgt. Hwang and his mad cap crew do little more then scream a lot and run around blowing things up. There’s no depth or development to any of the villains from the Hong Kong thugs to Captain Seo. It’s actually confusing to try to figure out how the group of zombie surviving thugs operate and why Captain Seo, who apparently doesn’t get his hands dirty, would be the group’s leader. It’s all very generalized and the villains exist simply to give our heroes people to run from and shoot at. You almost expect that from a zombie film…only those are usually the zombies.

THE POC-Y
Obviously, given that this is a Korean film, diversity isn’t really a relevant issue. What’s great though is that in the four years since Train to Busan released, that film, as well as Korean films generally (looking at you Parasite) have gained substantial popularity in the United States. As such, I expect there to be more appetite for Peninsula than there was for the original, which only made $2 million in the US. Western audiences gaining more appreciation for foreign films is a good thing and hopefully Peninsula can offer another step in that direction. After all, as Parasite director Joon-ho Bong said, “Once you overcome the one-inch tall barrier of subtitles, you will be introduced to so many more amazing films.”

Train to Busan: Peninsula, the hotly anticipated follow-up to the groundbreaking 2016 South Korean zombie film, premieres today in Canada, and is expected to...