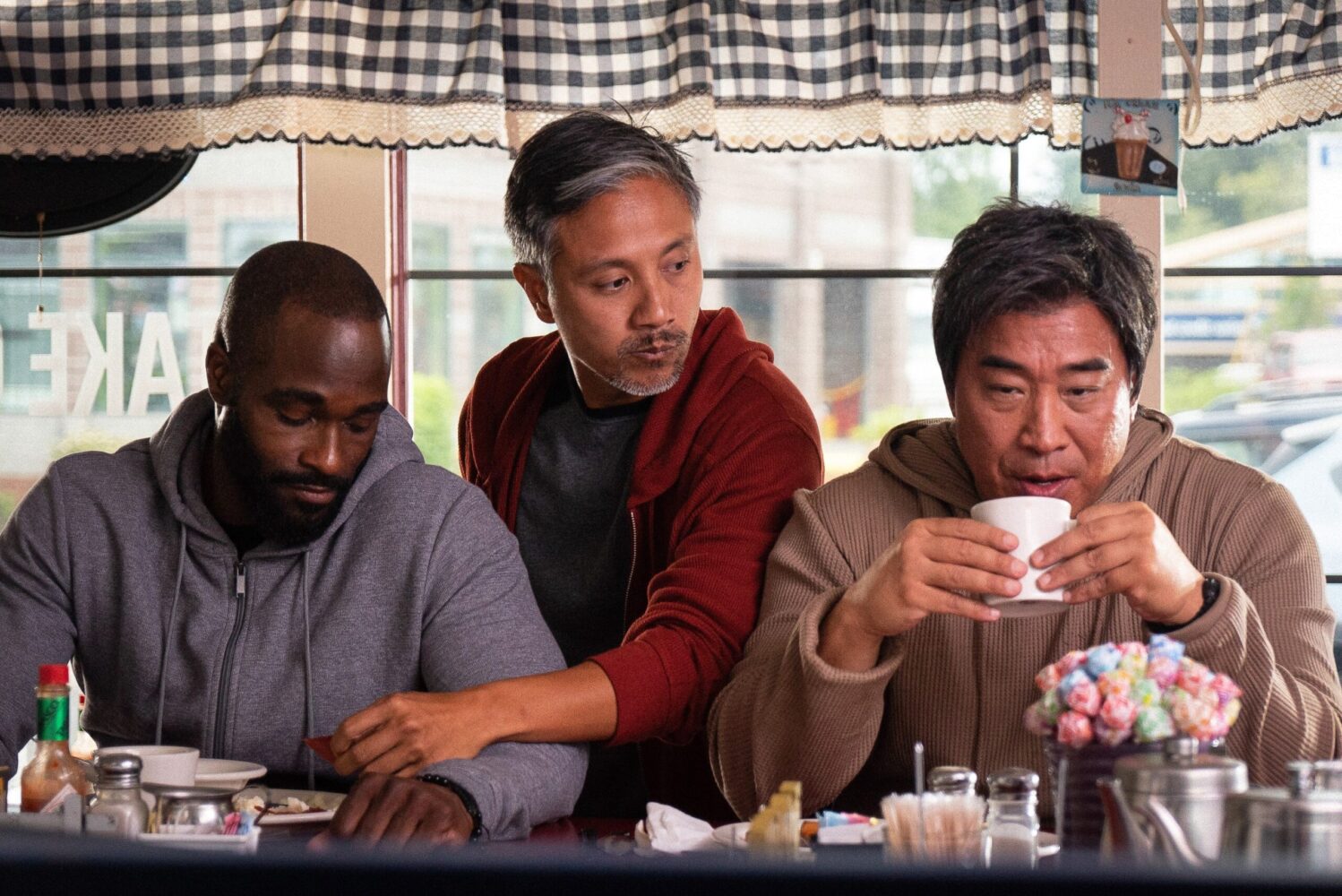 Sometimes a concept just speaks to you from the very beginning. Over two years ago I saw a Kickstarter project that sounded fresh, unique and interesting. It was an independent dramedy about a trio of washed up martial artists, featuring an Asian-American director and starring a trio of Filipino, Chinese and Black actors. Even as interested as I was in the project at the time, it was impossible to know if this project would ever become a reality. I couldn’t know at the time how committed writer/director Tran Quoc Bao and The Paper Tigers team were to realizing their vision.

The Paper Tigers started as truly the model independent film project and a testament to a group of creatives working on something they loved. Of course, what’s a story about underdogs if everything goes smoothly right? I can’t even imagine the challenges that The Paper Tigers crew faced in 2020, trying to get their film into film festivals and secure a distribution deal during a worldwide pandemic. Yet, underdogs keep fighting, and their perseverance paid off, as The Paper Tigers premiered at the 2020 Fantasia International Film Festival, and was subsequently acquired by Well Go USA.

Now, The Paper Tigers is set to release in theaters and VOD on Friday, May 7th and it’s an absolute must watch. It’s a film with great action and even greater heart, and a story about brotherhood, loyalty and how it’s never too late to fulfill your potential.

The Paper Tigers is the story of three friends, Danny (Alain Uy), Hing (Ron Yuan) and Jim (Mykel Shannon Jenkins) who train under a renowned martial arts master known to be extremely selective about his disciples. As young adults, the trio, dubbed “The Three Tigers” reach their martial arts primes, taking on all challengers with a brash excellence that inevitably flames out. Flash forward 30 years and life happened. Danny’s struggling with his son and ex-wife, Caryn (Jae Suh Park), Hing has suffered a serious leg injury due to construction work and Jim…well frankly Jim’s pretty jacked and doing okay.

One day, Hing finds Danny to share the news that their sifu has passed. As his only three disciples, it’s their responsibility to honor their old master, but since they can barely keep it together, another friendly sifu makes the arrangements and all they do is show up (late). After the funeral, a former rival, Carter (hilariously played by Matthew Page) tells them that their master’s death seems suspicious, prompting Danny and Hing to find Jim and reunite The Three Tigers.

What follows is a heartwarming and joyful martial arts mystery where Danny, Hing and Jim try to find out who is really responsible for the death of their sifu, as life continually gets in their way and the trio are repeatedly reminded that 40 is absolutely not the new 20 (I can attest to this).

Production Quality – First and foremost, this is a well made film. From the opening scene, it’s clear that the production quality is top notch. It looks good, sounds good and it makes you feel good. From the excellent flashback montages on video tape, to the deftly choreographed fight scenes, this film was well produced from top to bottom. The writing in particular is strong, and despite the fact that it’s a martial arts film, The Paper Tigers shines most when the characters get to banter. The best compliment I can offer is that as I was screening the film, my wife, who has zero interest in martial arts films, looked up from her phone and commented, “Who made this? It’s really good.” She sat down and watched the rest of the film with me.

Chemistry – The Paper Tigers cast is not only incredibly talented, but it’s clear that they had a great time together. Alain Uy absolutely shines as the lead and heir apparent to the sifu’s clan. He’s funny and relatable, and plays the part of the underdog you want to cheer for perfectly. Ron Yuan’s Hing is the heart of the film, consistently encouraging his friends and bringing a sincerity and hilarity that is reminiscent of Jacob Batalon’s Ned Leeds in the Marvel’s Spider-Man films. Finally, Mykel Shannon Jenkins adds a physical presence and intensity that every martial arts film needs. The dynamic between the three is consistently excellent and I wish The Paper Tigers was an on-going series just so I could see more of their interactions. Even the young versions of the Tigers, played by Yoshi Sudarso, Peter Adrian Sudarso and Gui DeSilva-Greene (who has been on the stunt team for several Marvel Studios films, including Avengers: Endgame) are fantastic together.

Martial Arts – I love so much about this film, but because it’s sold as a martial arts film, the actual fighting needed to deliver. Thankfully it does, as the fight scenes are well choreographed by Fight Choreographer Ken Quitugua, who also plays a role in the film. In addition to Quitugua, the film brought on Andy Le and Brian Le of Martial Club Official, known for their incredible martial arts stunts (and who also worked on Marvel Studios’ Shang-Chi and the Legend of the Ten Rings). There’s no “wire-fu” here, as all the action is grounded and provides a physicality that comes through as authentic and sometimes even painful. There’s a scene where Uy’s Danny is in a duel and starting to feel a bit frisky when he tries a kick and instead badly strains his leg or groin. I can honestly say that I felt his pain at that moment.

Unanswered Questions – Most martial arts films use the plot as simply a vehicle to get from one fight scene to another. The Paper Tigers however is more of a character driven story. The film has very relatable characters and makes you want to know more about their story. The thing is, while we see Danny, Hing and Jim grow into young martial artists, and we see them 30 years later as washed up men, there’s very little revealed about what happened in those 30 years. Maybe the point is that it doesn’t really matter what happened, because for all us, life happens. But there are bits and pieces mentioned about what took place in those missing years and it left me desperately wanting to know more. I’m going to need a prequel film!

Underdeveloped Villain – I don’t want to ruin the film’s surprises so I won’t go too much into this, but ultimately, the villain was underdeveloped. When the film’s plot is driven by a mystery, it’s a fine line between preserving the mystery and deciding when and how to reveal that mystery. If there’s one true weakness of the film, it’s probably that there weren’t seeds planted earlier in the story that made the reveal of the main villain more impactful.

Racial Slur – There’s one scene that genuinely bothered me. There’s a moment when The Three Tigers confront three young upstarts (played by Andy Le, Brian Le and Phillip Dang), and one of the characters hurls a racial slur at Mykel Shannon Jenkins’ character Jim. I get what they were going for there, but I wish that scene was left on the cutting room floor. Anti-Black sentiment in the Asian community is nothing new, and it’s important for Asian storytellers to be particularly aware of that issue and take steps to avoid those pitfalls. Also concerning is that the way that moment is resolved wasn’t given the requisite time to fully develop. Of course, it’s not easy to address issues like racism in a fast paced martial arts film, but all the more reason to avoid those types of scenes if there isn’t going to be enough time to thoroughly deal with them. The scene would have worked without it and Jim’s retribution wasn’t enough of a pay off.

This film is a POC Culture creative dream. It’s written and directed by a Southeast Asian-American (Tran), its cast and crew includes a diverse group of Asians and Asian-Americans, and it stars actors who are Filipino-American (Uy), Chinese-American (Yuan) and African-American (Jenkins).

As mentioned above, I genuinely wish that the scene with the racial slur was not in the film. That’s probably the biggest misstep in an otherwise excellent film.

It’s also a rare martial arts story told from the Asian-American perspective, as opposed to the far more common East Asian voice. That’s an important distinction. Most martial arts films are from Hong Kong or other parts of Asia and have a very distinct Asian voice. The Paper Tigers tells its story from the Asian diaspora perspective, and it’s an exciting new twist on the genre. This project is a true win for diverse filmmakers. It’s simply a joy to watch an American film with this kind of diversity.

Sometimes a concept just speaks to you from the very beginning. Nearly two years ago I saw a Kickstarter project that sounded fresh, unique...

The original Train to Busan was a claustrophobically intense zombie flick that kept your heart pounding by the frenetic speed of the zombies chasing...

Train to Busan: Peninsula, the hotly anticipated follow-up to the groundbreaking 2016 South Korean zombie film, premieres today in Canada, and is expected to...