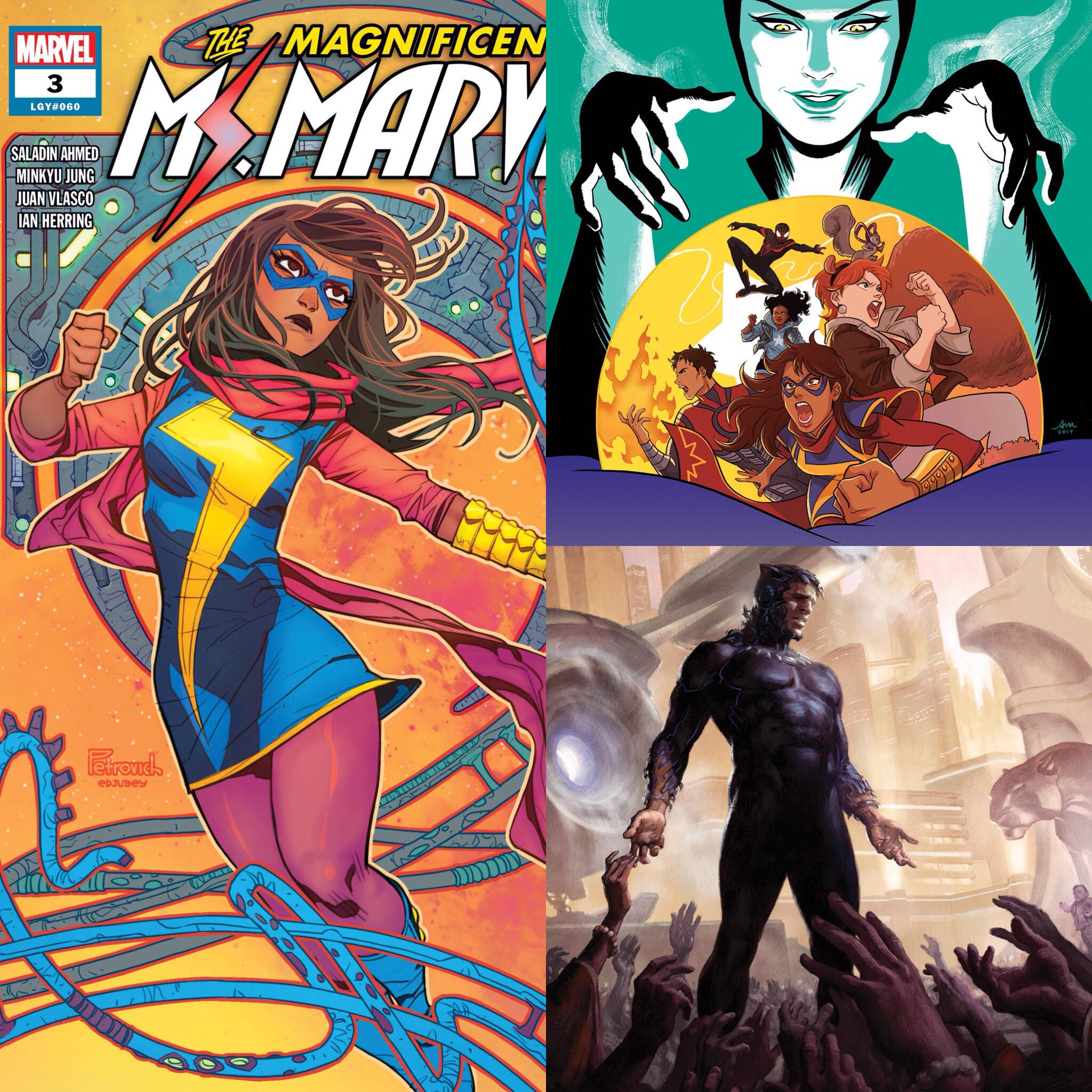 As I’ve written in the past, I love this series. It’s like Black Panther meets Star Wars and I still can’t believe it’s part of the main series. Written by Ta-Nehisi Coates and art by Jen Bartel!

THE “GATHERING OF MY NAME” REACHES A TURNING POINT! The can’t-miss issue! Rising star Jen Bartel returns for the end of the second groundbreaking arc. Years ago, the Black Panther departed Earth for the stars — and discovered an empire bigger than he could have dreamed. Learn at last how the King of Wakanda found himself a slave in the Vibranium mines of a half-familiar world. T’Challa’s lost past is revealed here!

Kamala Khan is a much beloved character, but seems to appear mostly in team-ups (like the example below!). That’s not necessarily a bad thing, as her team comics have been popular, but it’s cool to see her featured in her own series, which also highlights POC creators. I’m really digging the fantastic art and colors in this series which feel like a great fit for Kamala’s character. Written by Saladin Ahmed and art by Minkyu Jung!

A group of aliens are sure that Ms. Marvel is the chosen one they’ve been waiting for. But IS she? Something seems fishy with these aliens, and to get to the bottom of it, Kamala will embark on her first big space adventure! You’ll never guess who she’s bringing along as backup!

The third issue of a five issue miniseries aimed at younger audiences, this book features a fun team led by the aforementioned Kamala Khan and includes Miles Morales, Squirrel Girl, Inferno, America Chavez and Quake. It’s hard to find a squad this site can love more! Written by Nilah Magruder and art by Roberto Di Salvo!

THE HOME OF THE INHUMANS GETS A MEDIEVAL MAKEOVER!

Morgan le Fay’s moving to New Jersey, and she’s just chosen the location for her castle: New Attilan! But the Inhumans aren’t planning to give up their home to a queen from another age. And with fellow Inhumans Ms. Marvel and Inferno nearby, they’re hoping they won’t have to. The Marvel Rising team joins forces with Iso, Reader, Mosaic and others to save New Attilan — and the whole of New Jersey — from one of the most powerful sorceresses in history!

That’s it for this week! Let me know which books you’re excited about!