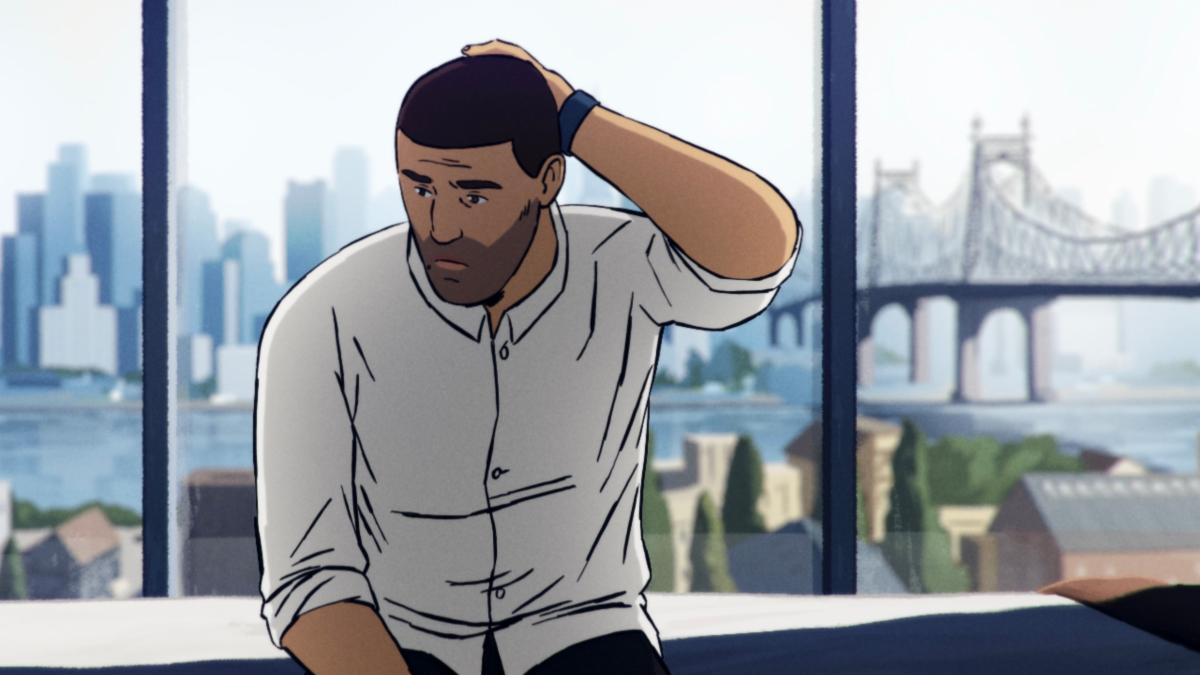 Riz Ahmed and Nikolaj Coster-Waldau have joined the Danish animated documentary Flee as executive producers, and will also be lending their voices to the English language version, releasing later this year. One of the most highly anticipated films set to have its world premiere at the Sundance Film Festival, Flee tells the true story of a child refugee fleeing his home in Afghanistan to Denmark.

The story is told through director Jonas Poher Rasmussen, a his close friend and high-school classmate of the film’s subject, who is identified with a pseudonym, Amin Nawabi.

Flee was originally a Cannes Film Festival selection, and will premiere at Sundance next week, with the English language version releasing later this year. I was fortunate enough to secure a ticket to Flee’s premiere at Sundance and am greatly looking forward to seeing this unique film.

Check out additional details, as well as why Ahmed and Coster-Waldau were drawn to this exciting project!

January 22, 2021 – Final Cut for Real announced today that Riz Ahmed and Nikolaj Coster-Waldau have joined the Danish animated documentary FLEE as Executive Producers. Ahmed and Coster-Waldau will also voice the lead roles in an English language version of the film which will debut later this year.

Originally selected for Cannes Film Festival 2020, FLEE tells the story of Amin Nawabi (a pseudonym), a child refugee fleeing his home in Afghanistan to safety in Denmark. Recounted mostly through animation to director Jonas Poher Rasmussen — his close friend and high-school classmate, Amin tells for the first time the story of his extraordinary journey. Showing how only by confronting the past is it possible to carve out a future, and the universal truth that only when you stop fleeing from who you are can you find the true meaning of home. Ahmed will play Amin, while Coster-Waldau voices director Jonas Poher Rasmussen.

“I was floored by the emotional impact of Flee. This is a unique project that pushes forward our ideas of what documentary, animation, and refugee-centred narratives can be. I’m proud to help bring this project to life for English speaking audiences,” said Riz Ahmed.

Coster-Waldau says “When I watched FLEE I was blown away by the power of a story told in a simple way. FLEE is a story of extreme perseverance and hope where all hope seems lost. By using animation director Jonas Poher Rasmussen captures the intensity of one refugee’s unbelievable journey from the streets of Kabul to the Danish suburbia. Because Amin is able to tell his story hidden behind his animated avatar it feels so much more revealing and honest than had it been a standard filmed interview. I am incredibly proud to be a part of FLEE and will encourage everyone to experience this gem of a film.”

FLEE will premiere in world documentary competition at Sundance film festival on Thursday January 28th. International Sales will be handled by Cinephil, while 30WEST will handle North American Sales.

Synopsis: Amin Nawabi (a pseudonym), a 36-year-old high-achieving academic, grapples with a painful secret he has kept hidden for 20 years, one that threatens to derail the life he has built for himself and his soon to be husband. Recounted mostly through animation to director Jonas Poher Rasmussen — his close friend and high-school classmate, he tells for the first time the story of his extraordinary journey as a child refugee from Afghanistan. Through heartfelt interviews between Jonas and Amin, FLEE tells an unforgettable story of self-discovery. Showing how only by confronting the past is it possible to carve out a future, and the universal truth that only when you stop fleeing from who you are can you find the true meaning of home.

Sun Creature is an international production company and creative animation studio based out of Copenhagen, Denmark and Bordeaux, France.The creative studio was established out of a shared love for the traditional artistry of hand-drawn animation, and to this day remains dedicated to delivering high quality work from concept to completion. Sun Creature is made up of a talented group of artists, directors and producers who firmly believe in the wonders of animation and storytelling to convey immersive narratives and meaningful entertainment. With a unique understanding of animation and its capabilities, Sun Creature develops and creates rich, compelling, out of this world narratives and cinematic experiences that have aesthetic appeal and a strict attention to detail. The studio’s fresh perspective combined with their collective expertise, has already earned Sun Creature international recognition and attention from heavy-weight entertainment and commercial brands like Cartoon Network, Netflix, Riot Games and Travel Oregon. Sun Creature has received awards, nominations and honorable mentions from some of the world’s most renowned festivals and shows, including the Cannes film festival, Annecy Film Festival, Annie Awards, BAFTA Awards and Emile Awards.

Vivement Lundi ! is an Oscar®-Nominated animation and documentary studio based in Rennes, France. Est. in 1997. Animated productions of the company won more than 350 awards. Since 2009, the animation department is co-directed by Jean-François Le Corre and Mathieu Courtois who produce and coproduce original works in 2D animation and in stop motion. In 2011, the company produced Pok&Mok, an animated series (78 x 7’) and won a prestigious French award: the Procirep Prize for the best TV producer, Animation category. Regularly involved in European co-productions, Vivement Lundi ! coproduced the Belgian animated short Oh Willy… awarded with the Cartoon d’Or 2012 and as Best short at SXSW Austin. In 2014, Vivement Lundi ! produced the stopmotion series “Dimitri” (1 x 26’ + 26 x 5’) which has been sold to 20 countries and awarded at OAIF Ottawa and Anima Brussels. 2015, Storm hits jacket by Paul Cabon won the jury’s prize for the Best animated short at Sundance Film Festival and Vivement Lundi ! won the Cartoon Tribute for the Best European animation Producer of the year.

Mostfilm is a Stockholm based production company focusing on sustainable, high-end, creative features, documentaries and commercials for the national and international markets. Charlotte Most, founder and producer, works with a selection of preferred partners in Sweden and Europe and has recently been involved in the Sundance winning The Nile Hilton Incident and Måns Månsson’s The Yard (3 National Swedish Film Awards). Most film’s commercial assignements involve clients like IKEA, Oriflame and Volvo. Most joined forces with producer Maria Guerpillon in 2019 and created the production company MostAlice Film. Mostfilm has had films screened at various festivals throughout the world, such as Cannes, Sundance, CPH:DOX, Shanghai, the Karlovy Vary International Film Festival. Her productions have been acquired by Swedish National Television (SVT). She works and lives in Stockholm, Sweden.

Mer Film is an independent production and distribution company that was founded by producer Maria Ekerhovd in 2011. Mer Film’s ambition is to develop, produce and distribute visionary and relevant films that engage the audience. The company works with some of Norway’s finest directors, such as Eskil Vogt, Iram Haq, Ole Giæver, Jorunn Myklebust Syversen, Gunnar Vikene, Itonje Søimer Guttormsen. Mer Film produced multiple-awarded features like What Will People Say (TIFF 2017) by Iram Haq ; From The Balcony (Berlinale 2017) and Out of Nature (TIFF /Berlinale 2015) by Ole Giæver ; Disco (TIFF/ San Sebastian 2019) by Jorunn Myklebust Syversen. Upcoming titles for release in 2021 are The Innocents by Eskil Vogt and GRITT by Itonje Søimer Guttormsen. Most recent international co-productions include Our Time (Venice 2018, by Carlos Reygadas) and Divine Love (Sundance/Berlinale Panorama 2019, by Gabriel Mascaro).

VICE Studios is a global production and distribution division within VICE Media Group delivering premium original programming across documentary, scripted and film. With development and production teams in the USA, Canada, UK, Europe, Asia-Pacific and Latin America, VICE Studios cuts through culture, delivering stories that are popular, human and spotlight the unexpected for audiences around the world.

VICE Studios also houses VICE’s new licensing and distribution group, with a catalogue of over 900 hours of programming created across the VICE Media Group, across a range of genres from documentary to lifestyle to Vice News. VICE Studios upcoming original productions include a six-part documentary series, Pride for FX, Moments Like This Never Last premiered at DOCNYC 2020, and Last Looks and Big Rad Wolf for Quibi. Launched in 2017, VICE Studios productions include Chris Smith’s Emmy-nominated Jim & Andy: The Great Beyond and Fyre: The Greatest Party that Never Happened (Netflix); feature film The Report starring Adam Driver and Annette Bening (Amazon); Diego Osorno’s 1994 (Netflix), Dark Side of the Ring (VICE TV), AKA Jane Roe (FX), and Satanic Verses (BBC).

Left Handed has several projects on the horizon including Mogul Mowgli, a genre-busting, culturally hybrid, and award-winning debut feature from an exciting new voice in Bassam Tariq. The film is co-written, starring and produced by Ahmed and premiered at the Berlin Film Festival where it won the Fipresci International Critics’ Prize. It is currently nominated for six BIFA Awards including best screenplay, best actor, best music, best debut screenwriter, best cinematography and best sound. Strand will release the drama in the U.S. this year.

WORLD SALES – Cinephil is an international sales and advisory firm, with a strong reputation for securing international distribution, broadcasting and financing deals for documentaries from around the world on behalf of producers and directors. With a history of selling unique and award-winning films, Cinephil also acts as a strategic advisor and co-producer.

Cinephil has facilitated the sale and financing of well over a hundred films. Cinephil represented (and produced) the 2013 Academy Award nominee, The Gatekeepers; 2014 Academy Award nominee, The Act of Killing, executive produced by Werner Herzog and Errol Morris; Cathedrals of Culture, a 3D project executive produced by Wim Wenders and including films by Wim Wenders and Robert Redford, and Martin Scorsese’s documentary, The 50 Year Argument.

Summer of Soul (…Or, When the Revolution Could Not Be Televised), directed by Ahmir “Questlove” Thompson in his directorial debut, premiered on the first...

Judas and the Black Messiah is a reminder of how important it is for diverse creators tell our stories. If we don’t tell our...

REVIEW: ESPN 30 for 30 – ‘Be Water’ is a Bruce Lee Documentary About America

For many Asian-Americans who grew up in the United States in the 80s and 90s, the definitive Bruce Lee documentary is Dragon: The Bruce...