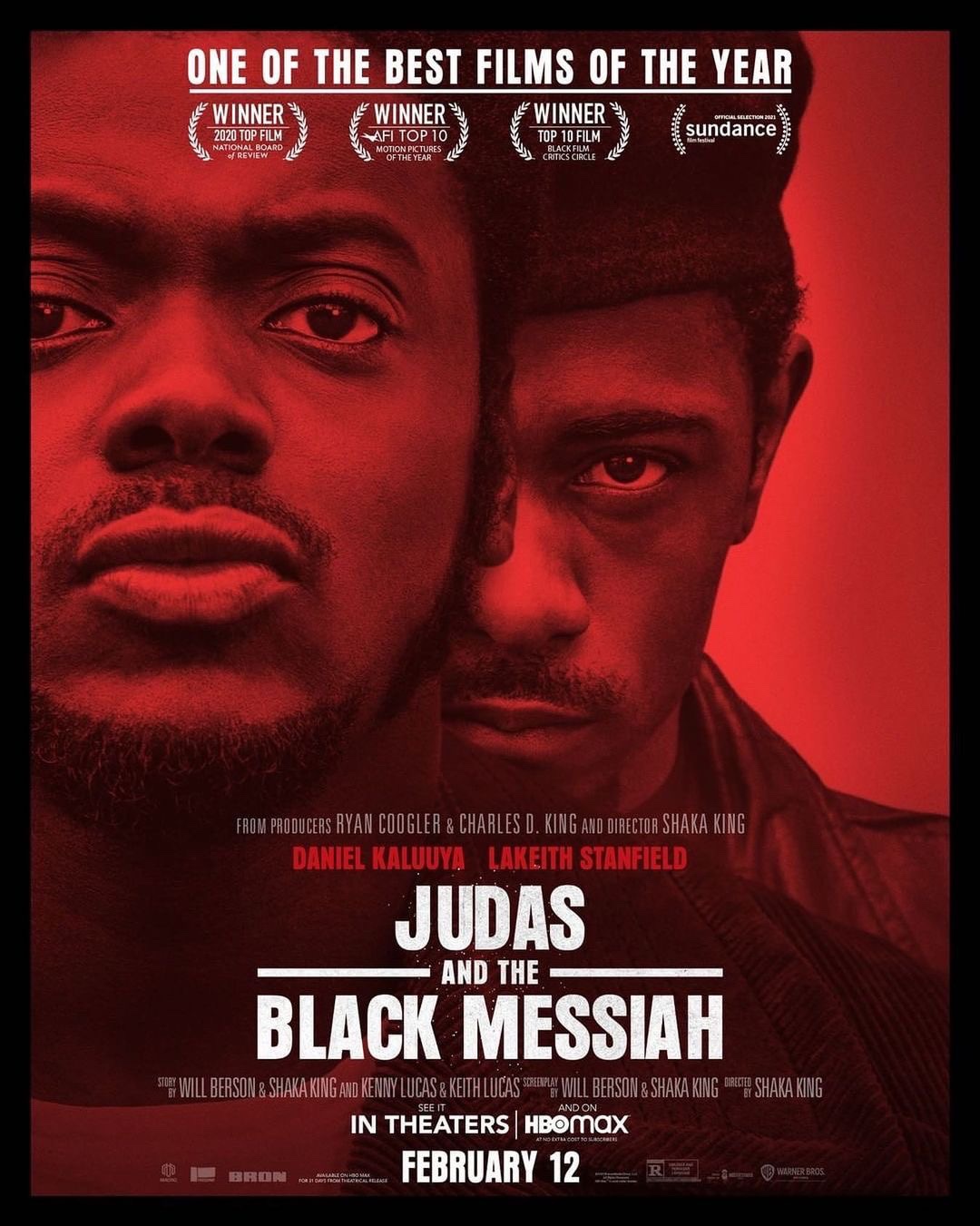 Judas and the Black Messiah Poster

Judas and the Black Messiah is a reminder of how important it is for diverse creators tell our stories. If we don’t tell our stories, they’ll get erased. The film tells the story of Fred Hampton, who became the Chairman of the Illinois chapter of the Black Panthers in the late 1960s, engineered the formation of the “Rainbow Coalition” and was assassinated by the FBI.

Not enough people know Fred Hampton’s story because he’s been overlooked and ignored by the history books, and because his assassination was conveniently swept under the rug. That’s the part that sticks with you as you watch this incredible film – “Why haven’t we heard more of this story before?” Thanks to director Shaka King and stars Daniel Kaluuya and LaKeith Stanfield, the current generation won’t have to ask that question anymore.

Judas and the Black Messiah is a powerful film that respects its subject matter and is a must watch for anyone who wants to gain a greater understanding of how the fight for social justice today is an echo of the struggles of the past.

Judas and the Black Messiah premiered at the Sundance Film Festival and releases in theaters and on HBO Max on February 12th!

Fred Hampton was assassinated by the FBI and local authorities in 1969. The local police forces busted into Hampton’s apartment at 4:30 am, shot 99 bullets through doors, windows and walls (only 1 bullet was discharged by anyone other than the police), and executed Hampton. He was 21 years old.

Judas and the Black Messiah tells Hampton’s story in an impactful and inspiring way. The film begins with Hampton, powerfully played by Daniel Kaluuya, already Chairman of the Illinois chapter of the Black Panthers and a rising star within the Chicago community. For the first third of the film, Hampton is a force of nature, magnetically drawing people to him and bringing people together, with his passion, intensity and authenticity. Hampton wants revolution, and that begins with taking care of his own community by educating children, feeding the poor and protecting his people. Beyond that, Hampton knows the Black Panthers can’t do it alone, so he seeks alliances with other Black activists, as well as Puerto Rican and even white groups, forming what came to be known as the “Rainbow Coalition.” Many have likely heard the term thrown around flippantly in political conversations on TV, especially recently. It’s a stark example of Black erasure that the term itself is used often on CNN, while the man responsible for its creation is completely ignored.

In an effort to undermine Hampton and prevent the rise of the “Black Messiah,” the FBI, led by Roy Mitchell (Jesse Plemons), coaxes a car-thief named Bill O’Neal (LaKeith Stanfield) to infiltrate the Black Panthers. The whole process starts simply enough. O’Neal is caught impersonating an FBI agent to steal cars. When he inevitably gets caught, Mitchell asks O’Neal why he chose to wield a fake badge instead of something conventional like a gun. “A badge is scarier than a gun,” O’Neal poignantly explains. That one comment encapsulates the social justice fight of both that time and ours.

Facing a lengthy prison sentence (and probably realizing why it’s better to just steal cars with a gun), O’Neal has little choice but to agree to aid the FBI. He quickly rises up the ranks of the Black Panthers, becoming Hampton’s driver and eventually the group’s head of security.

As Hampton gains prominence, the FBI arrests him for allegedly stealing ice cream and puts him in prison. Without their leader, the Black Panthers struggle to maintain, which also allows O’Neal to continue to entrench himself within the party. Several members are killed by police or arrested, and the group is beginning to fall apart.

Hampton is released and quickly brings everyone back together. In the most powerful scene of the film, Hampton leads a rally full of community groups and delivers a stirring speech that feels like a coronation. The FBI feels the same way and decides that prison isn’t enough for Hampton. Instead, they plot to have him drugged and killed in his apartment, with O’Neal playing a critical role.

In the film’s heartbreaking final scene, police officers break into Hampton’s apartment, shoot it up and execute a drugged Hampton in cold blood. Even knowing the story was coming to that moment, the ending is incredibly painful.

Kaluuya brings an unparalleled intensity to the role. He delivers Hampton’s speeches with the kind of charisma that makes you lose yourself in the moment. You almost feel like you’re watching a live feed of Hampton’s rally and it nearly brings you to your feet. Even in the intimate moments with his significant other, Deborah Johnson (Dominique Fishback), Kaluuya swallows every scene. It’s not lost on me how similar this characterization of Hampton is to Kaluuya’s W’Kabi from the Marvel Studios film Black Panther. Perhaps that performance is how director Shaka King knew that Kaluuya would be ideal for the role.

Stanfield is the perfect contrast to Kaluuya, playing O’Neal with an easy-going subtlety. Unlike Hampton, O’Neal isn’t trying to save the world. He was just a guy trying to survive when he was thrown into Hampton’s solar system. Nobody plays the every man like Stanfield, who brings an unassuming likability to all of his roles. Indeed, throughout the film, you can’t help but hope that the story will turn out differently and O’Neal will somehow redeem himself.

Carried by Kaluuya and Stanfield, Judas and the Black Messiah leaves you with conflicting emotions. It’s inspiring but infuriating. It makes you realize how little things have changed since the 1960s, yet leaves you appreciative that those who fight for justice today stand on the shoulders of those who sacrificed so much before.

This movie is a Daniel Kaluuya and LaKeith Stanfield vehicle. While Dominique Fishback, Jesse Plemons and others deliver admirable performances, their characters aren’t given enough to work with.

Fishback’s Deborah Johnson is a strong woman who earns Hampton’s respect and love. But we don’t get much of her story beyond her being Hampton’s girlfriend and becoming pregnant with his son. Plemons’ FBI agent Mitchell is predictably smug and arrogant with little to no depth or nuance (not that anybody is asking for nuanced FBI agents). The rest of the Black Panther members fail to stand out, only serving as fodder for the police to be killed or arrested.

When Hampton is in prison, several members of the Black Panthers act in seemingly inexplicable ways, getting into deadly confrontations with police with little justification or purpose. The story seeks to heighten the stakes by showing more members being killed off, but because we barely know these other characters and the set-up for these scenes feels underdeveloped, we’re not emotionally invested.

At one point, Hampton’s confidants want him to leave the country and go on the run to avoid returning to prison. Hampton refuses, saying that the party is not about him. I wish the character development of the other Black Panthers reflected that ideal.

Judas and the Black Messiah is the kind of story that’s been erased by history and desperately needs to be told. Shaka King co-wrote and directed, making the most of the considerable talents of his two stars.

Further, despite the tragic ending, the film isn’t the typical story of suffering. Instead, I found most of the film to be generally inspiring because the story of an important Black activist is finally being told on a larger scale. Thanks to this film, more people will know about Hampton than ever before and hopefully that will prompt more of us to delve deeper into that period of activism.