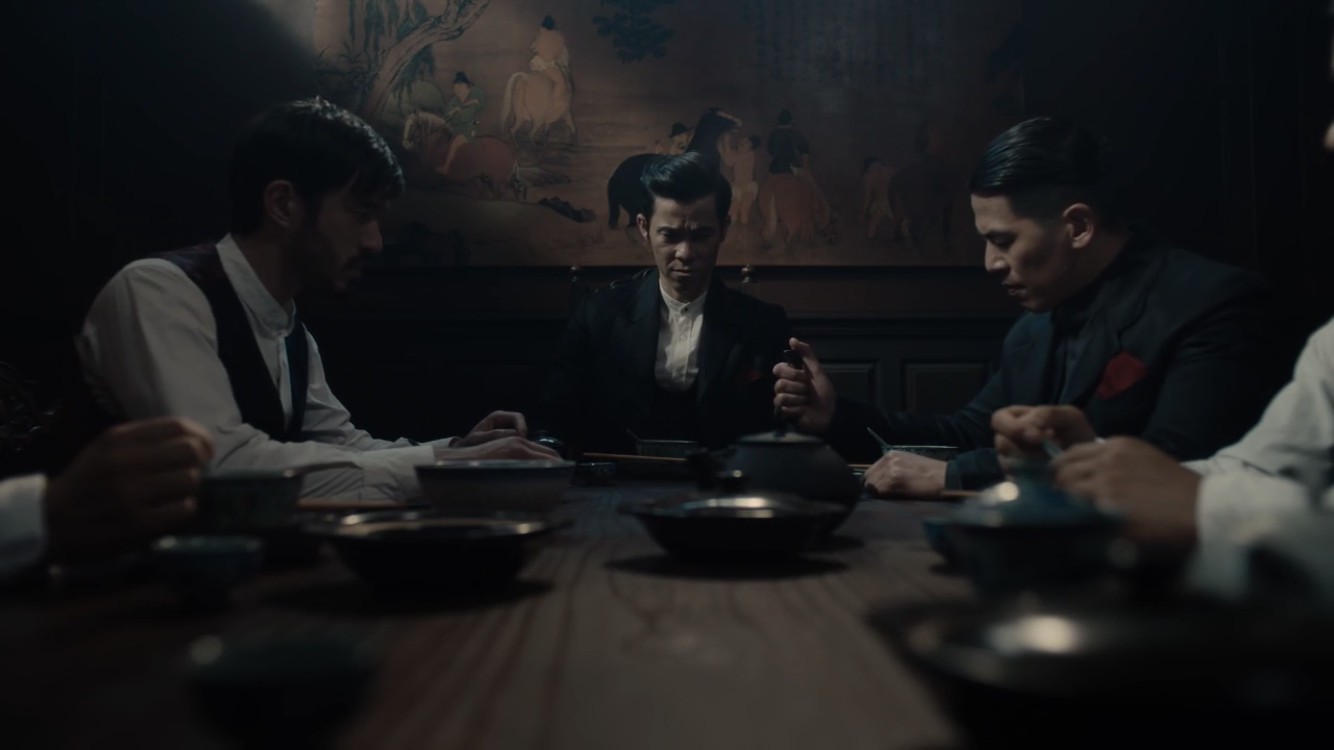 Episode 4 of Warrior is called “The White Mountain” and the meaning of the title is both appropriate and chilling. Having said that, I almost wish it was called “The Yellow Demon” because we finally get the long awaited backstory of Bolo (Rich Ting), the Hop Wei’s menacing enforcer and a lot more! Spoilers below!

This episode gave us a sneak peak into the skeletons that several of our characters have in their closets. It’s bookended by Big Bill, who we see addicted to gambling both in the opening scene and the closing scene. In Becoming Warrior, Shannon Lee mentions that Big Bill is a character who consistently appeared in Bruce Lee’s writings of this show. Bill is an interesting parallel to Ah Sahm (Andrew Koji). Although Bill seemingly has all the advantages that Ah Sahm doesn’t – he’s a white man with status in the police force – he’s ultimately just as stuck in his circumstances as Ah Sahm. He’s forced to head the Chinatown force, which he hates. He’s addicted to gambling, which puts him in a vicious cycle of gambling debt. That debt puts him at the mercy of Leary, Ah Toy (Olivia Cheng), or anyone else who can help pay off that debt. Of course, he doesn’t actually use the money to pay any of his debt and instead goes back to gambling. Indeed, it seems everyone in Chinatown is stuck in their circumstances and are struggling to find the agency to improve their situation.

Early in this episode was learn the backstory of Bolo, also known as the “Yellow Demon” due to his fighting prowess (and yellowness). Young Jun (Jason Tobin) tells Ah Sahm that Bolo worked on the transcontinental railroad and during that time, was forced to fight for money. Bolo always finished off his opponents in order to earn a fatality bonus from the sadistic duck masters. Bolo actor Rich Ting revealed a fairly hilarious behind-the-scenes tidbit in his weekly post-show social media chat, saying that for his flashback fight sequence, where he’s seen fighting shirtless, Rich tried numerous “peck flexes” in honor of his character’s namesake, Bolo Yeung. Unfortunately for all of us, those peck flexes all ended up on the cutting room floor.

Back to Bolo’s Hop Wei origin, Father Jun (Perry Yung), hearing the legend of the “Yellow Demon”, went to see him in person and ultimately bought him from the ducks. This leads to a great exchange where Ah Sahm asks incredulously, “What do you mean bought him? Like a hat?” In that moment, we’re reminded that Ah Sahm hasn’t been in the United States long. He’s from China, where he was part of the majority and presumably lived free. Bolo angrily puts Ah Sahm in his place, saying “Don’t kid yourself. Father Jun owns your onion ass like he owns the rest of us.” It really makes you consider the circumstances of the Hop Wei, especially Ah Sahm. Is it really a better position to be owned by one of your own than to be owned by another group? On one hand, it seems like the Hop Wei are at least treated like humans. On the other, as we saw last episode with Ah Sahm, Father Jun doesn’t hesitate to beat them down when he’s displeased.

After Bolo story time, Young Jun and Ah Sahm step out for some bromancing. It’s a really nice moment where we get to see their friendship grow as they talk about trusting one another and share a bit of their respective histories. I write this every week, but Jason Tobin is exceptional as plays Young Jun with such joy in every scene. This is an important scene going forward for this season. Young Jun is essentially the only character who has embraced and welcomed Ah Sahm since he arrived in the U.S. You can see that Young Jun desires a kinship with Ah Sahm. You would think Ah Sahm would appreciate that sincerity, and he does to a certain extent, but he is also holding back. Maybe it’s because, as Ah Sahm tells Young Jun, he’s been on his own for a while.

Interestingly, it seems like the women on the show, Mai Ling (Dianne Doan) and Ah Toy (Olivia Cheng) are the two characters who seem most aware of just how stuck everyone around them are, and are determined to change their situation. In this episode we see Mai Ling setting her plans in motion. She’s preparing the Long Zii for war and they need killers. In a great scene, we see Li Yong (Joe Taslim) easily dispatching a group of wannabe thugs. Unimpressed, Mai Ling declares that they are not enough, and turns to Wang Chao (Hoon Lee) to set up a meeting with a new tong – the Fung Hai.

The Fung Hai are a fascinating addition to our story because they are a Mongolian tong. Chao makes his feelings about them clear, saying “the Great Wall was built to keep out savages like the Fung Hai”. Here we see that true to our reality, there’s a hierarchy even amongst the various Asians in Chinatown. Much like how the Caucasians belittle the Chinese, while using them for their needs, the Chinese in turn look down on the Mongolians but now need to use them as well. Chao brokers the meeting and Mai Ling quickly establishes her authority by engineering the assassination of the Fung Hai leader. I loved seeing Mai Ling flex her power in this episode. She’s really menacing in this scene as she coldly tells the Fung Hai leader “that’s why I already killed you” seconds before he realizes that he’s been poisoned. The Fung Hai scene is the highlight of the episode for me not only because of the interesting new wrinkle, but also because it introduced an Asian American LEGEND – Dustin Nguyen! It just feels so right to have Nguyen as a part of this ground breaking Asian show and I can’t wait to see more of him.

Meanwhile in the pond, the Deputy Mayor Buckley continues to scheme to increase tensions in Chinatown. He engineers a sting of Ah Toy’s brothel, which Mayor Blake happens to be enjoying at the time of the sting. Of course all the white men in the brothel are let go while the Asians are arrested. One foolish onion grabs a blade when the police bust in, realizes it’s a bad idea, and puts it back down. An officer shoots him in the head anyway and proceeds to urinate on him. As I’ve written before, Warrior isn’t really one for subtlety. Big Bill intends to arrest Ah Toy, who he says everybody knows. However, Ah Toy knows how to play the game and bribes Big Bill to keep it moving. All of this is clearly leading towards establishing that the Chinese are a dangerous nuisance and must be dealt with. I’m just not sure we need so many scenes to establish that storyline.

It’s not all war in Chinatown. Ah Sahm and Penny Blake are drawn together in Penny’s secret apartment (her father owns the building) and get to know each other really well (again, it’s not subtle). Ah Sahm reveals to Penny (and us) a bit more of his family history. His grandfather was a white sea captain who ended up in China and fell in love with his grandmother. His grandfather stayed and raised Ah Sahm and his sister Mai Ling. This scene with Penny where Ah Sahm is very open is an interesting contrast to his earlier conversation with Young Jun where he was clearly holding back.

Finally, Mai Ling is waiting for Ah Sahm as he leaves Penny’s apartment therapy. She urges him to go back home to China and he asks her to go with him. Mai Ling tells him that she’s never going back, “I’m nobody in China and you’re nobody here,” she says. Ah Sahm responds by saying that he should have fought for her in China and he won’t make that mistake again. He’s staying (obviously). It really makes you wonder though – how is Ah Sahm going to fight for Mai Ling while being on a rival tong?

“The White Mountain” was the first of a couple episodes written by Kenneth Lin and it was well done. We learn critical information and backgrounds about several key characters, and we see the chess pieces moving into place for what must inevitably culminate into a bloody confrontation.

Episode 5.- “The Blood and the Sh*t” is a bit of a departure from the main plot and is so much fun I can’t hype it up enough. This episode was my favorite hour of television in years. I love it so much. To me, this upcoming episode shows just how great Warrior can be and is the highlight of the first 8 episodes (Cinemax has kept episodes 9 and 10 under wraps). If you’ve held out for any reason, this is the episode to watch!

In this article:Bruce Lee, Cinemax, Warrior