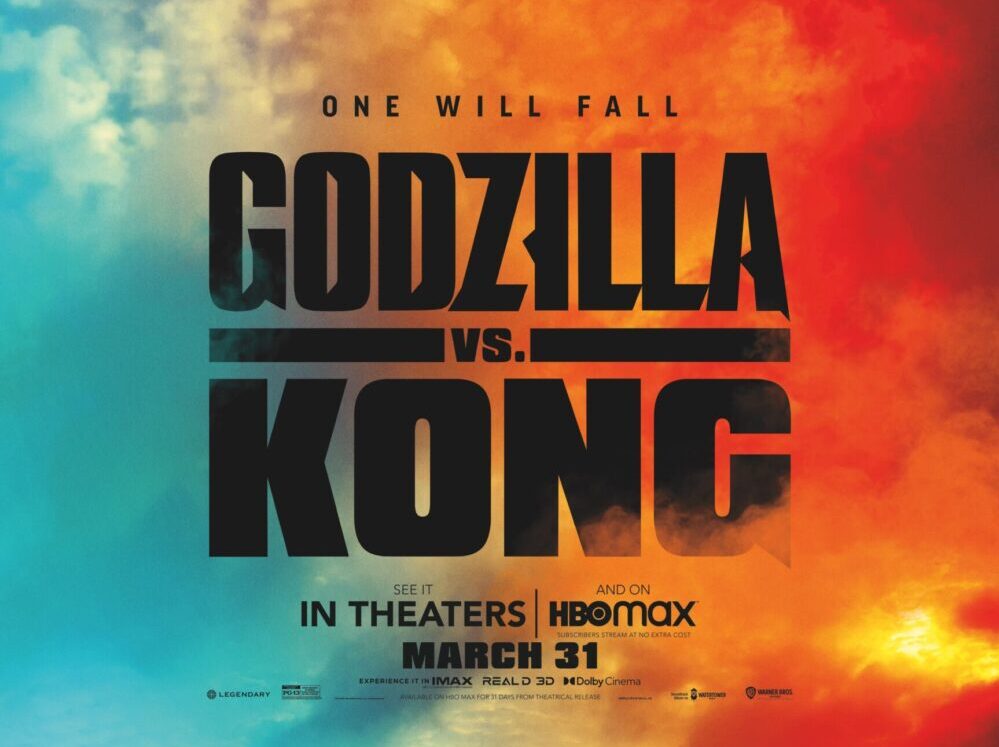 The cinematic “Monsterverse” from Warner Bros. and Legendary Pictures lives on with the latest film in the shared cinematic universe, Godzilla vs. Kong. Stemming directly from the events of Godzilla: King of the Monsters and Kong: Skull Island, this film finally gives fans the match-up that we’ve been dreaming about for decades.

There are few characters in pop culture as enduring as Godzilla and King Kong. Given that the two creatures are known for being giant titans far beyond the ability for humans to combat or control, a potential battle between Godzilla and Kong has been something many have been dying to see on the big screen.

The timing of the film’s release is somewhat fortuitous as well; at least as fortuitous as anything can be given the current circumstances. As theaters begin to reopen, Godzilla vs. Kong, directed by Adam Wingard, gives those who have been itching to get back to the theater a truly epic film to watch. That eagerness is reflected in the news over the weekend that the film has already set a global pandemic record with $128 million in the international box office, with $70.3 coming from China.

Of course, thanks to WarnerMedia and HBO Max’s new film release strategy, those who aren’t ready or able to go to the theaters can still enjoy this clash of the titans from the comfort of their own homes.

Godzilla vs. Kong releases in U.S. theaters and on HBO Max on March 31st! Light spoilers below!

Kong is held in captivity in a The Truman Show like dome that replicates Skull Island. He’s too smart to be fooled though, and threatens to take the whole thing down. The humans have a need for Kong, as Walter Simmons (Demián Bichir), the extremely wealthy head of the Apex corporation, and head tech officer, Ren Serizawa (Shun Oguri), believe that the center of the Earth offers an unlimited source of energy, and Kong is the key to getting there.

Obviously, if you’ve ever watched any kind of movie before, you know that the two rich executives of a massive corporation trying to tap into a natural power source don’t exactly have the best intentions. The two recruit shamed scientist Nathan Lind (Alexander Skarsgård) to lead a team with Anthropologist, Dr. Ilene Andrews (Rebecca Hall) and her daughter Jia, an Indigenous deaf girl who was rescued from Skull Island and has a special connection with Kong.

They believe that Skull Island is an extension of the center of the Earth that overflowed to the crust, and that more creatures like Kong exist there. Together, the team plans to take Kong on an expedition into the Earth, hoping that Kong’s instincts will lead them to his “home.”

Meanwhile, Madison Russell (Millie Bobby Brown) and Mark Russell (Kyle Chandler) who make their return from Godzilla: King of the Monsters, are trying to figure out why Godzilla has suddenly reappeared and is attacking Apex facilities. Madison teams up with conspiracy theory podcaster and Apex employee Bernie Hayes (Brian Tyree Henry) and her friend Josh Valentine (Julian Dennison), to infiltrate Apex facilities and figure out what their actual intentions are.

All of that exists to set up some epic brawls (yes plural) between Godzilla and Kong, and the eventual epic culmination, which has to be seen to be appreciated.

Some films are very straight forward in what they plan to offer. With a title like Godzilla vs. Kong, there’s no sense hiding the ball. It’s as much a (super) heavyweight prize-fight as it is a feature film. That’s exactly what audiences expect and that’s exactly what they get in epic fashion.

The film opens with a slick title sequence featuring a March Madness like bracket that shows Kong and Godzilla facing off against other kaiju and steadily advancing towards the “championship.” This is the perfect introduction to this film and sets the tone from the beginning. The plot exists because it has to, but I do wonder how many fans would object if the plot was nothing more than humans running around screaming while Kong and Godzilla fought other monsters, and eventually each other, tournament style.

When you go to In-N-Out, you can order fries and shakes, but you’re there for the burger and the burger must be excellent (it is). Similarly, the most important question that anyone is asking is – how good are the battles in Godzilla vs. Kong? The answer is that they are glorious. As mentioned above, the two titans clash a few rounds times, in different settings, and director Adam Wingard and writers Eric Pearson and Max Borenstein truly did an excellent job of concocting creative ways to set up exciting and innovative fight scenes.

The climactic battle is a visual feast that is sure to be a Youtube highlight favorite for years to come.

Even for a plot that is this straight forward, the film mostly wastes the talents of actors like Bryan Tyree Henry, Millie Bobby Brown and Kyle Chandler. Although it’s a nice connection to the previous Godzilla film to have Brown and Chandler, their B story with Henry and Julian Dennison is mostly pointless. Brown’s Madison Russell believes in Godzilla’s goodness, and Henry’s Bernie Hayes is convinced that the company he’s working for is corrupt. Both are absolutely correct, but neither are the reason that the truth is uncovered.

The crew mostly sneaks around Scooby-Doo style, trying to figure things out while avoiding capture. Eventually, they’re captured. That’s really it. Disappointingly, the filmmakers could have simply lifted the B plot out of the film and not missed much beyond the crew’s star power and some decently amusing interactions.

Another missed opportunity is the underdeveloped story regarding the Earth’s center. While it is primarily the MacGuffin to get to the main event, there are some elements that could have been further explored and created some very welcome world building. The scenes that we do get of the Earth’s center are fascinating, lush with giant creatures and bizarre landscapes, and featuring a zero-gravity like atmosphere. We actually get to see Kong float around from one land formation to another.

I would have liked for the film to spend more time at Earth’s center, have seen more creatures, and learned more about what this newfound land means for the rest of the world. Perhaps that’s a story for another film in the Monsterverse.

The best examples of diversity in the cast are Kaylee Hottle’s Jia, who is both Indigenous and deaf, Bryan Tyree Henry’s Hayes, and Shun Oguri, who plays Apex’s Serizawa. This is Hottle’s first feature film, and it’s fantastic that the filmmakers cast someone who is authentically deaf. You wouldn’t know her lack of experience from her performance either, as Hottle is magnetic in her scenes, especially with Kong, which couldn’t have been easy given the green screen and CGI involved.

I appreciated that Henry’s Hayes is an intelligent engineer and one of the few in the film who suspects Apex’s nefarious motivations and has been actively seeking the truth. Given all the groundwork laid to establish Hayes’ background, it’s odd that the writers couldn’t have made him more directly responsible for revealing Apex’s plans.

Even less vital to the story is Oguri’s Serizawa, the Apex executive who has only a few lines and even less to do. Considering Godzilla’s Japanese origins, I expected to see more Japanese characters in the film. Ren Serizawa is likely related to Ken Watanabe’s Ishiro Serizawa from Godzilla: King of the Monsters, which is a nice connection, but it would have been nice if the character’s utility went beyond an unstated tie to the previous film.

I would be remiss if I didn’t mention that Ronny Chieng makes a far too short, but delightful cameo in the film as well.