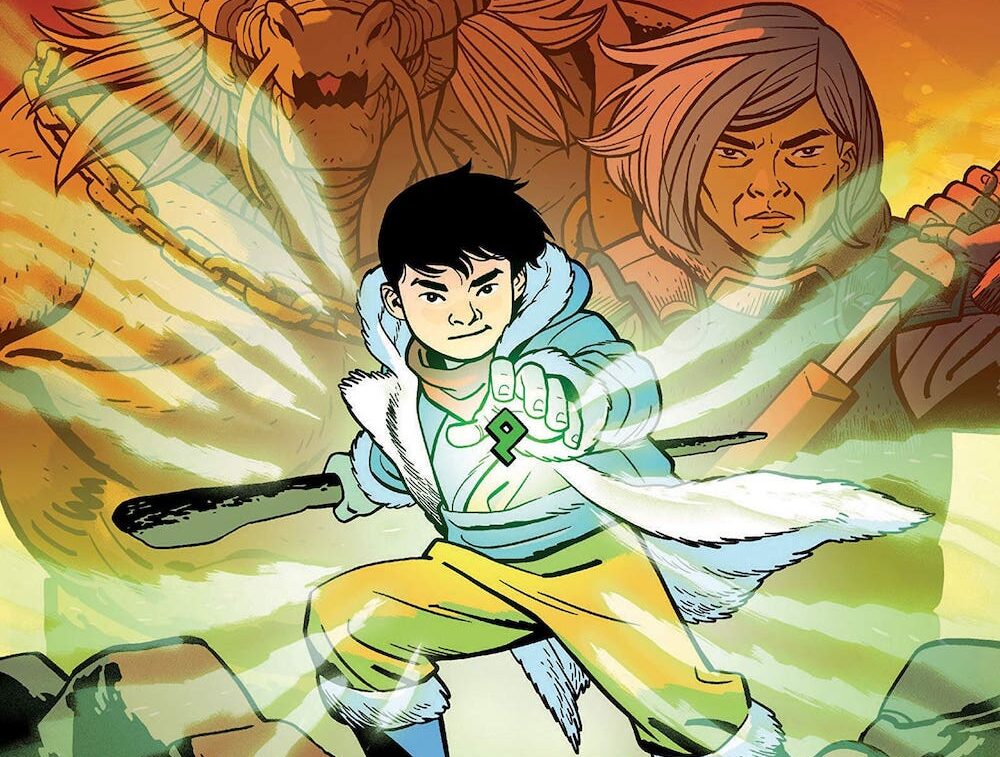 The Dragon Path by Ethan Young is the kind of Asian centered fantasy epic that I wish I had when I was a kid. It’s full of action and intrigue, has great characters, and tells a wonderful story that you can share with the whole family.

I was first introduced to Asian American writer and artist Ethan Young when I saw his beautifully drawn variant covers for Ronin Island by writer Greg Pak. Each of Young’s covers for that series look like fine art pieces that deserve to be hung up on a wall to be admired; which is exactly what I intend to do with them.

When I found out that Young was not only a fantastic artist, but an accomplished writer, I was eager for more of his work. This week, Young released his latest graphic novel, The Dragon Path, which tells one of the rare Asian fantasy stories set in a fictional world.

The Dragon Path is available now at your local comic book shop and wherever books are sold. Support independent creators and pick it up today! Spoiler below!

The Wong Clan hopes to leave their blighted homeland for a mythical place called Old Land, but first they must pass through the Dragon Path. Young Prince Sing is separated from the clan during an attack by their fearsome enemies, the Dragon Clan.

REVIEW – The Dragon Path is Full of Action and Beautiful Art

From the first page of the book, the reader is thrown into the middle of the action, as the Wong Clan, is traveling through the dangerous Dragon Path on what look like kid friendly Mad Max: Fury Road vehicles. We meet Lady Hu, the grizzled military leader of the Wong Clan, who also happens to be Lord Wong’s sister. Lord Wong’s son, and heir apparent to the Wong Clan, is Prince Sing, the predictably rebellious and excitable young protagonist with preternatural abilities.

Lady Hu is a great character. Her character design reflects the strong but kind persona that really shines through from the first page. She’s a character that instills confidence in others and you just know that she will play a critical role in protecting her clan and her noteworthy nephew. Prince Sing is rambunctious but eager to help, and I appreciated that Young didn’t make him out to be overly rebellious or mischievous. To be sure, Sing has his share moments where he breaks the rules or disobeys orders, but it’s not obnoxious or annoying like some young characters often are.

Lord Wong and his clan are struggling to return to their homeland, the Old Land, from which they’ve been displaced for generations following a great civil war with a magical group simply called the Mystics. At the advice and counsel of Quan, Lord Wong’s chief advisor, the clan is traveling through dangerous land ruled by a group of dragon-like humanoids.

Of course, you can’t have a good fantasy story without a tragic history and a prophecy. Here, the Wong Clan was forced to abandon their land when they accidentally conjured up an evil monster that chased them away. Only one brave warrior remained to fight the monster, but while he lost that battle, the prophecy foretold his victorious return.

The set-up of the story feels familiar but with a fresh twist. Having a weak leader who relies too much on a questionable advisor desperately pursuing a prophecy is certainly nothing new, but the way the story plays out is more interesting that most of these types of tales.

As the Wong Clan travel to the Old Land, they’re ambushed by age old enemies called the Dragon Tribe, led by Komodo Khan. The unpleasant past between the two groups is only hinted at, but it’s notable that it seems the Wong Clan came out on top, with Lady Hu in particular responsible for some trauma.

I’m not sure whether to love that a dragon-like being is named “Komodo” or whether it’s too on the nose, but it’s certainly a name that younger readers can enjoy. And much of the book’s characters and lands are named with a child’s perspective in mind. Young readers don’t need unnecessarily complex names that are impossible to remember, let alone pronounce. Komodo Khan, The Dragon Tribe, The Wong Clan and the Old Land are perfect for the story’s purposes.

As for the Dragon Tribe itself, while they look scary and are for the most part antagonists in the story, Young gives a level of nuance with to group that made me sympathize with them. It feels like they are past victims of war from the Wong Clan, and this story’s current conflict is a direct result of the Wong Clan’s trespassing across their land (thanks to Quan of course). Given the circumstances, I wish the Dragon Tribe was cast in an even more balanced, if not distinctly positive, light.

As the Wong Clan approaches the Old Land, Prince Sing dreams that he is being called “home” by a mysterious monk-like individual. When Sing is later injured in a battle with the Dragon Tribe, that monk from his dreams appears and spirits him away to safety.

The monk reveals himself to be Ming the Mystic, with the legendary “monster,” Midnight. Ming reveals that the history and prophecy that Prince Sing grew up on aren’t exactly accurate. The fabled monster that ran off the Wong Clan is actually a giant, yet cuddly, cat-like being with a unicorn horn.

It turns out that the Wong Clan aren’t the innocent victims they believed themselves to be. Instead, their ancestors abused the Old Land, the people who worked with them like the Mystics, and the magic that helped the Old Land prosper. When they sought magical help and Midnight appeared, they ran in fear instead of embracing its assistance.

I loved how the prophecy turned out to be propaganda, and that the Wong Clan ends up being primarily responsible for their own demise. The subtle message is important, especially for a children’s book. We all need greater awareness of our own past actions, and need to take responsibility for those actions in order to begin the process of healing.

Ultimately, Quan betrays the Wong Clan, to nobody’s surprise but Lord Wong. Quan reveals that he is a descendant of the Lams, who were servants of the Wong Clan during their glory days. He’s been plotting this scheme to exact revenge of the Wongs for their mistreatment. Another group of people wronged by the Wongs.

Quan’s plan was to manipulate Lord Wong into returning to the Old Land so that Quan could take control of a magical orb called the Ever Orb, which was the source of the Old Land’s magic.

Quan succeeds in taking control of the Ever Orb, and as a result, controls Midnight as well. He threatens to rule of the Wongs, the Dragon Tribe and all others around him with this newfound power.

There’s a distinct Erik Killmonger from Black Panther vibe from Quan. In many ways, he’s justified in his hate towards the Wongs and probably deserves a level of restitution. Unfortunately, that manifests itself in a egomaniacal and violent way that makes Quan an easy villain to dismiss. As with Killmonger, I would have preferred if Quan’s villainous characterization was scaled back a bit so that he might have been more sympathetic.

Ultimately, Prince Sing, with newly developing mystical powers, helps to take the Ever Orb from Quan and the Wongs and the Dragon Tribe are freed. The incident inspires a mutual respect between the two groups and a temporary truce is established.

While the prophecy itself turned out to be inaccurate, Prince Sing recognizes that even without magic, “the Old Land will be what we make if it.”

The art and action in The Dragon Path is absolutely stellar. Young’s art shines with lush landscapes and dynamic action scenes. His art is a truly unique blend of Asian and Western styles that you can’t find anywhere else. While I wish some of the characters had a bit more nuance, the book is already at a robust 198 pages, and given that it’s intended for younger audiences, I’m not sure that Young could have made the story much longer. It’s a great read that’s beautiful to read through and I look forward to sharing it with my family.