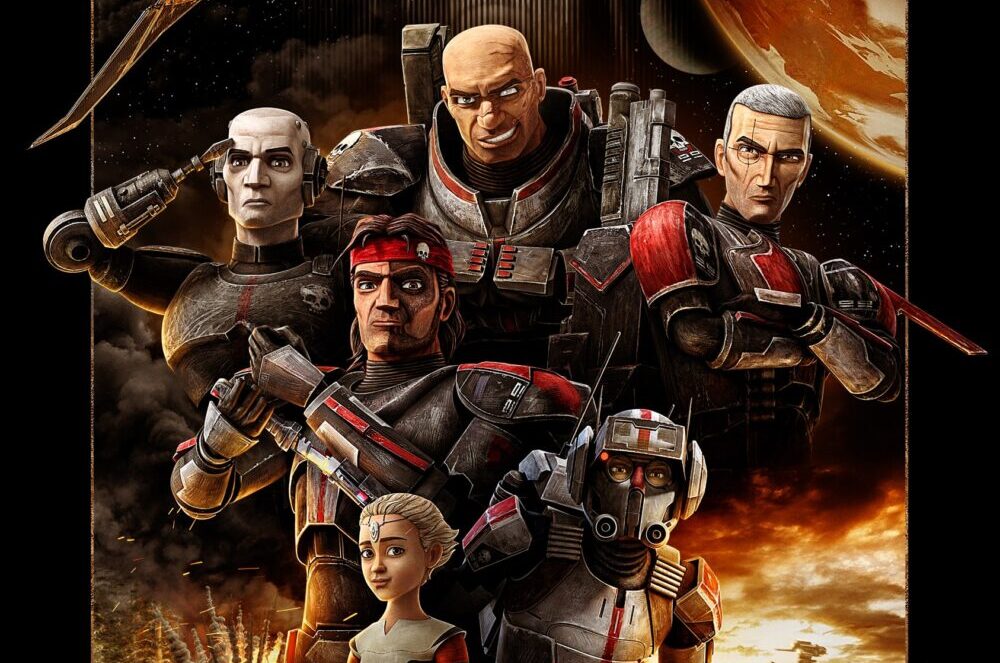 Clone Force 99, otherwise known as the Bad Batch, made their unlikely debut last year in season seven of Star Wars: The Clone Wars and fans had never before seen clone troopers like them. Explicitly designed to be unique and different, in contrast to the rest of their clone brethren, the Bad Batch was loud, bombastic and made their presence known.

Not long after the latest completion of The Clone Wars, Lucasfilm announced that the squad made up of Hunter, Wrecker, Tech, Crosshair and Echo, would star in their own animated series.

That announcement, though intriguing, was a little puzzling as well. Maybe back in 2015 when the unfinished Bad Batch arc of The Clone Wars was screened at Star Wars Celebration Anaheim, a Bad Batch series might have made sense. But now, after The Clone Wars ended (again), two other Star Wars animated series have come and gone, and a whole new trilogy of live-action films (and two Star Wars stories) have been released, it seemed like an odd time to return to the Republic era. After all, hadn’t we seen countless stories in this era? What more was there to mine?

Interestingly enough, the creators of The Bad Batch, Executive Producer and Head Writer Jennifer Corbett and Executive Producer and Supervising Director Brad Rau, identified a specific moment in that period of Star Wars history that hadn’t yet been fully fleshed out. Thus, The Bad Batch takes place during the immediate aftermath of Order 66 and the tumultuous transition between the Republic to the Galactic Empire, and it’s fascinating.

Star Wars: The Bad Batch premieres exclusively on Disney+ on “Star Wars Day,” May 4th. Following the special 70 minute premiere, episode 2 will stream on Disney+ on Friday, May 7th, with each subsequent episode streaming on Fridays. Some spoilers below!

Episode 1 begins immediately before Order 66, with Clone Force 99 (all voiced by Dee Bradley Baker) doing what they do best. They’re on a mission with Jedi Master Deepa Billaba (voiced by Archie Panjabi), her apprentice Caleb Dume (voiced by Freddie Prinze, Jr.) and a squad of regular clone troopers or “Regs”. During their mission, the infamous Order 66 is given, and Billaba is killed. Of course, as fans of Star Wars animation know, Dume escapes, later to take on the identity of Kanan Jarrus in Star Wars: Rebels.

Following that mission, Clone Force 99 begin to realize that everything has changed. Back at their base, they meet an interesting human girl, Omega (voiced by Michelle Ang), who is working for the Kaminoans as a medical tech, but seems to have some unique traits of her own. Later, all of the clones cheer as they watch the transmission of Palpatine declaring himself the Emperor, and Admiral Tarkin (Stephen Stanton) makes an unexpected visit to evaluate the efficacy of continuing to use clones going forward. Tarkin, intrigued by the unusual clone squad, sends Clone Force 99 on a new mission to dispose of alleged insurgents and test their loyalty.

The Bad Batch is happy to comply, as they’re most comfortable out on the field instead of trying to navigate the changing political climate, but they find that this mission is unlike any of their prior missions. Instead of the droid army they’ve become accustomed to fighting, Clone Force 99 find that they’ve been sent to dispatch a ragtag group of former Republic troopers and unarmed civilians. Hunter orders the squad to abandon the mission and leave, much to Crosshair’s dismay.

Now far more wary of Admiral Tarkin’s leadership and this new Empire, the Bad Batch return to base only to be thrown in the brig for failing to follow Tarkin’s orders. Eventually, with the aid of Omega, they escape, but not before their lives and even their team are changed forever.

This 70 minute premiere had virtually everything a Star Wars fan could ask for in introducing a new series. It clearly laid the foundation for the direction of the series, seamlessly integrated beloved characters from other Star Wars stories, and established an emotional weight that is likely to be the anchor of the show going forward.

Admittedly, I was initially skeptical about The Bad Batch. While The Clone Wars is some of my favorite Star Wars storytelling ever, it seemed like a strange idea to spin-off this particular group into their own series. However, with this premiere episode, my doubts were proven to be unfounded. Watching the elite squad of clone troopers try to navigate their way through a galaxy that suddenly shifted around them was incredibly interesting. What happens to elite soldiers when the war is over and they’re not needed anymore? Especially for a “defective” group like Clone Force 99, there really wasn’t any expectation of life after the war, let alone one where they’re on the run from the same leaders they previously took orders from.

In this way, The Bad Batch looks to tell a unique story that hasn’t really been told in Star Wars. To this point, we’ve seen what led up to Order 66 and what the galaxy looks like after the Empire is in control. In this series, it will be interesting to see the galaxy in turmoil and transition with the Bad Batch as our point of entry. I hope we get a chance to visit numerous different worlds, see different populations and even meet some Jedi on the run.

At the very top of my wishlist for this series is for the Bad Batch to go to Jedha. Perhaps Clone Force 99 will want to travel to that Force infused planet to get to the bottom of what really happened to the Jedi. And of course, we know that a certain partisan leader who has already crossed paths with the Bad Batch ends up on Jedha.

This episode was excellent from beginning to end so there isn’t much to complain about. The only area of disappointment for me is in the way they explained Crosshair’s actions. Instead of giving the character the agency that has so defined Clone Force 99, the creators decided to place the blame on his programming. That felt like a cop out and reduced the emotional impact of his actions on both the rest of his team and the story.

What happens to Crosshair and Clone Force 99 looks to be the overarching storyline for this series, and it’s much more interesting if Crosshair has the autonomy to be in control of his actions and decisions. Otherwise, it’s just another clone programming storyline that we’ve seen plenty of already and frankly isn’t as intriguing. Clone Force 99 is supposed to be a family story, but how much “family” can there be if each of the family members don’t have agency?

It was a very welcome revelation at the end of this episode that Omega is voiced by Michelle Ang, who is an Australian actor of Asian descent. Ang has been seen in shows like The New Legends of Monkey and Fear the Walking Dead, and is now one of the precious few Asian actors to play a major role in the Star Wars universe.

Star Wars is a franchise built on Asian themes and aesthetics, and it’s been disappointing to see that so few Asian actors have been given opportunities in one of the world’s most impactful franchises. While there has been some important steps to rectify that in recent years, animation has certainly led the way. Between Tiya Sircar’s Sabine Wren in Star Wars: Rebels, Christopher Sean’s Kazuda Xiono in Star Wars: Resistance, and now Ang’s Omega, it’s been exciting to see Asians in the voice booth and on screen.