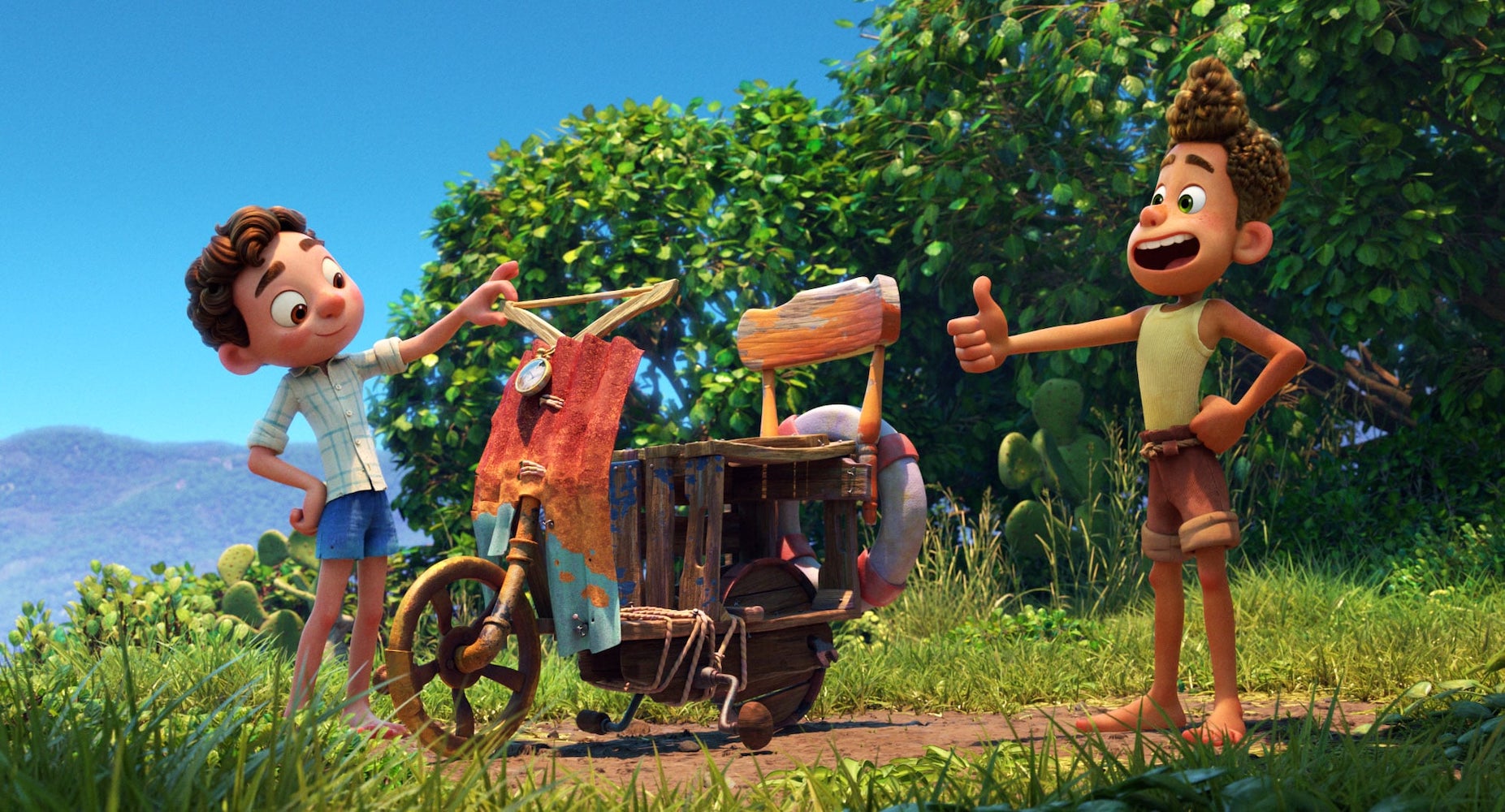 Pixar’s latest animated film, Luca, is a bright coming-of-age story about youthful exuberance, adventure and acceptance. It feels like a beautiful children’s picture book made into a feature film. However, it lacks some of that magic that typically makes Pixar films so unique and special.

Luca comes almost exactly six months after Pixar’s last film, Soul, which was one of the rare Pixar films with a more adult centered story. In many ways, Luca is a nice complement to Soul in that Luca’s whimsical tone balances Soul’s more emotional and grown-up themes. With bright colors, and a joyful story, Luca feels very much like a fun summer movie made for kids to enjoy during break.

Set in a beautiful seaside town on the Italian Riviera, Disney and Pixar’s original feature film “Luca” is a coming-of-age story about one young boy experiencing an unforgettable summer filled with gelato, pasta and endless scooter rides. Luca (voice of Jacob Tremblay) shares these adventures with his newfound best friend, Alberto (voice of Jack Dylan Grazer), but all the fun is threatened by a deeply-held secret: they are sea monsters from another world just below the water’s surface. Directed by Academy Award® nominee Enrico Casarosa (“La Luna”) and produced by Andrea Warren (“Lava,” “Cars 3”), “Luca” debuts exclusively on Disney+ on June 18, 2021.

Sometimes it feels like we’re in an era where if a film isn’t part of the superhero genre, it needs to be the complete opposite, with dramatic themes and somber tones. Luca has neither of those characteristics and that’s a good thing. Instead, Luca is a perfect summer film for children and families needing content during the break. The joyful color palette, bombastic character designs and delightful animation combine for a film that simply looks great on screen.

The story is a slightly new twist on a familiar tale of adolescence. Luca and Alberto are two young friends who spend the summer seeking adventure, pushing the boundaries of their independence and learning to grow more comfortable with who they are. It’s almost like an animated Ferris Bueller’s Day Off, only our protagonists are young sea-creatures living off the coast of a fictional Italian city called Portorosso (an homage to the Studio Ghibli film Porco Rosso).

Luca and Alberto are different (what kids aren’t?) and struggling to deal with parental boundaries and pressure to conform to the norm. The adolescent angst from our young heroes is symbolized by the fact that these kids aren’t kids at all, but instead are green, purple and blue hued sea-creatures who naturally transform into human looking beings when they leave the water. It’s not ever explained why this is the case, and what the history is between humans and sea creatures. All we need to know is that it happens, and that allows Luca and Alberto to escape their underwater homes into a brand new world, full of wondrous things like gelato, pasta and soccer.

Nearly every kid (or former kid) can relate to Luca and Alberto. We can all remember the time when we were figuring out life for ourselves and had the itch to explore the world beyond the comfortable boundaries set around us by adults.

At Portorosso, Luca and Alberto intend to get a Vespa scooter, which to them represents the freedom to explore the world. They meet a spirited young human girl named Giulia (voiced by Emma Berman), who unwittingly serves as their guide to humanity, introducing them to basic concepts like money, and more mind-blowing ideas like stars and the universe. Of course, they also find that the human world is not all kind, as Portorosso’s resident villain is an obnoxious human named Ercole Visconti (voiced by Saverio Raimondo).

Portorosso is known for a famed summer triathlon race which involves swimming, bicycle riding and…pasta eating. Ercole is the resident champion, and Luca and Alberto team with Giulia to take his crown and win the prize money so they can afford a Vespa.

Along the way, Luca and Alberto struggle with their sea creature secret (the town residents are obsessed with hunting sea creatures) as well as their diverging visions of the future.

All three main characters are endearing and easy to root for. Even the “villain” of the story is more annoying and obnoxious than anything else. There’s a scene where Ercole and his cronies attack Luca and Alberto, but the moment is never very threatening (they come in with spears but put them down in favor of a punch or two). Instead, Ercole is memorable for being awkwardly older than the other kids he’s competing with, bragging incessantly and looking like a catfish.

Giulia is the heart of the story. She’s spirited and eager, and welcomes the two boys warmly. Even after she finds out that the two aren’t what they appear to be, there’s no more than a moment of fear before she fights for them. Giulia says that at school she’s known as “the weird kid,” and having experienced some alienation from her peers, she’s more than happy to embrace good kids who will be her friend, human or sea-creature.

Luca’s parents spend the film trying to save him from the horrors of humanity; as all parents want to do with their kids. They realize eventually that they can’t save Luca; they can only help equip him with the tools to protect himself. As Luca’s grandmother says, some will accept him, some won’t, but the lesson is for Luca to know how to find the friends who will.

In the end, Luca is a story about acceptance. Accepting yourself, accepting others, and surrounding yourself with those who do the same. That’s a message that everyone needs to learn.

As nice of a lesson as Luca teaches, it’s overly convenient, mostly superficial and lacks the attractive distinctiveness that is a Pixar trademark. The fact that Luca and Alberto are sea creatures is a good visual proxy for what makes all of us “different.” But how those differences are experienced by others is mostly glossed over. The film spends a considerable amount of time establishing that the residents of Portorosso are terrified of sea creatures and determined to hunt them. Even in the climactic race, there are a line of boats full of townspeople ready to hunt down any potential sea monsters. It’s completely unlikely that a town like that would readily accept two strangers who shockingly reveal themselves to be the very creatures they’ve all feared. As we all know too well, fear is the great motivator for discrimination and violence.

The film has little to no exploration on what being different truly means, the varied ways that people will experience, accept or reject differences, and the pain that often comes with those responses. There is a memorably tragic moment when Luca himself publicly turns on Alberto, who is the first to be revealed as a sea creature. I wish the film had more of those poignant moments and delved deeper into the consequences.

That’s where Luca feels like a children’s picture book to its detriment. Yes it’s beautiful, colorful and fun. Yes the underlying message is critically important to learn. But most children’s books carry those same attributes and yet there’s a reason Eyes That Kiss in the Corners (which is an amazing book) is recommended for ages 2-7. Books have the advantage of being more specific to their audience, but Pixar films would ideally have more broad appeal. Even accepting that Luca is targeted towards younger viewers (like Soul is targeted for more mature fans), I wanted a little bit…more.

Unfortunately, Luca is not a film with strong diversity. Maya Rudolph voices Luca’s mother in an entertaining and heartfelt performance, but beyond Rudolph, the rest of the cast is white or white passing. Of course, with a film that’s inspired by Italy, where even the underwater fish have Italian sounding names, one might not necessarily expect a diverse cast. But given that it’s an animated film, and in an industry where white voice actors are often cast to voice diverse animated characters, it would have been nice if the opposite was done here.