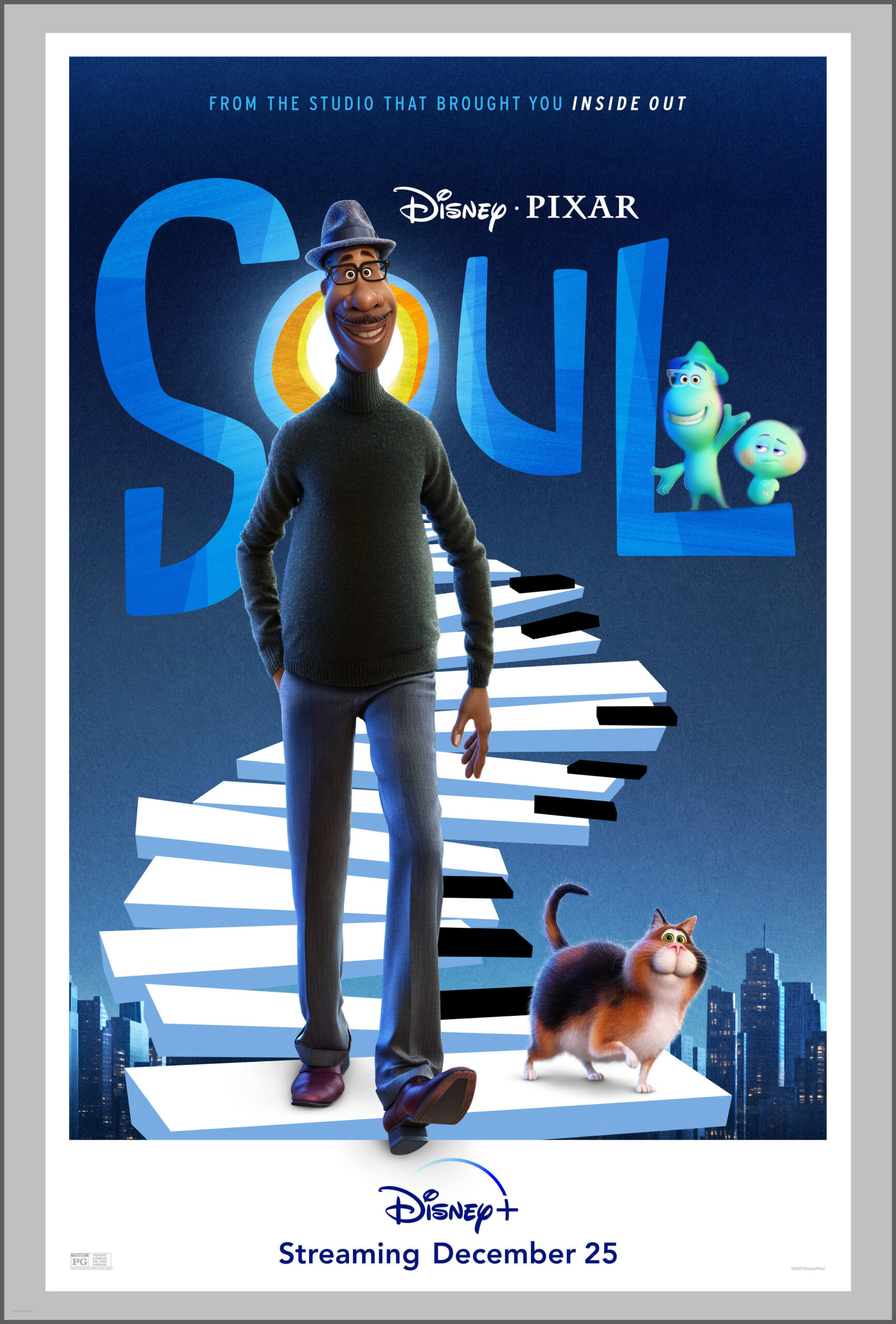 Kemp Powers, who co-directed and co-wrote Disney Pixar’s Soul, believes that “there is universality by going for hyper specificity.” His goal with Soul was to tell an authentically Black story, centered on a Black character, that would resonate with broad audiences. He succeeded.

Soul is a very different film than I expected it to be, and that’s a good thing. You know that scene in Star Wars: The Empire Strikes Back, when Force Ghost Obi-wan’s voice is trying to convince Yoda to teach Luke Skywalker the ways of the Force? Yoda says of Luke, “All his life has he looked away…to the future, to the horizon. Never his mind on where he was. Hmm? What he was doing.” That’s what Soul is about.

Joe Gardner (voiced by Jamie Foxx), isn’t a young moisture farmer from Tatooine, but he’s a middle-aged Black man from New York whose life hasn’t turned out the way he hoped. Joe is so many of us. Like Luke Skywalker, Joe goes through life overlooking what’s in front of him and focusing on what he wishes he was doing – playing jazz music. Joe finally gets his shot when he’s invited to join the Rebel Alliance audition for jazz legend Dorthea Williams (voiced by Angela Bassett), when life, again, goes south (literally). It seems like Soul would be a movie about chasing your passion and accomplishing your dreams, but it’s not. That’s why I loved it.

Disney Pixar’s Soul premieres on Disney+ on Christmas Day, December 25th at no additional cost to Disney+ subscribers! Spoilers below!

“SOUL”
What is it that makes you…YOU? Pixar Animation Studios’ all-new feature film “Soul” introduces Joe Gardner (voice of Jamie Foxx) – a middle-school band teacher who gets the chance of a lifetime to play at the best jazz club in town. But one small misstep takes him from the streets of New York City to The Great Before – a fantastical place where new souls get their personalities, quirks and interests before they go to Earth. Determined to return to his life, Joe teams up with a precocious soul, 22 (voice of Tina Fey), who has never understood the appeal of the human experience. As Joe desperately tries to show 22 what’s great about living, he may just discover the answers to some of life’s most important questions.

Directed by Academy Award® winner Pete Docter (“Inside Out,” “Up”), co-directed by Kemp Powers (“One Night in Miami”) and produced by Academy Award nominee Dana Murray, p.g.a. (Pixar short “Lou”), Disney and Pixar’s “Soul” will be available exclusively on Disney+ (where Disney+ is available) beginning Dec. 25, 2020.

Some of the best stories are the ones that take you in unexpected directions. At first blush, I thought I had Soul pegged. Joe loses his life on the cusp of realizing his dream, his passion for music allows him to go back so that he can meet his calling, and on the way he inspires 22 to chase her dream. We all know that story right? Well, Soul isn’t that story at all. In fact, in a refreshing way, it’s virtually the exact opposite.

If 2020 has taught us anything (let’s be honest, it’s taught us quite a bit…not much of it positive), it’s that things in life don’t always end up the way we expected, hoped or even deserved. That’s a harsh reality, but it is in fact, reality. Soul reminds us that even when life isn’t what it should be, we can still find joy in the small things, and it’s those small, every day things that we take for granted, that actually make up the beauty of life.

Joe’s story in Soul is so unfair at first. He struggles to pursue his passion, facing the disapproval of his mother and the mockery of his friends. His life accomplishment is finally securing a full-time job as a school teacher that comes with…benefits! Joe remains uninspired by his life and refuses to let go of his dream of being a professional jazz musician. Like so many of us, he wants to make his dream, his job. He finally gets a chance to play for a jazz legend and join her band when he falls into a manhole and dies. That’s just awful. I knew it was going to happen and it still made angry!

Joe finds himself in “soul” form headed to the great beyond. But he refuses to accept death when he was just about to realize his dream, and finds a way to sneak himself to the place where new souls are sent to Earth as soon as they find their “spark.” There, he meets Tina Fey’s 22, a rebellious soul that hasn’t found her spark despite countless efforts by some of the most legendary humans in history. The two figure out a way to get Joe back to Earth, but accidentally, 22’s soul is placed inside Joe’s body, while Joe’s soul is stuck in a cat.

To nobody’s surprise, the ultra talented Jamie Foxx is amazing as Joe Gardner. While Foxx has voiced animated characters before, at the global press conference, Foxx shared that his daughter reminded him that a Pixar film is different. “My daughter was like, ‘Dad, you’ve done animation, but not good animation. Not the good kind….You’re in Pixar now. You made it,'” Foxx said. Foxx embraces that challenge, as you almost can’t tell it’s Jamie Foxx voicing Joe Gardner, and instead get lost in Joe as his own person. Sometimes animated films cast A-list celebrities to help sell the film on their star power, and while I’m sure it doesn’t hurt to have Jamie Foxx’s name on the poster, it’s Foxx’s talent that makes him a perfect fit for this role. Joe is a middle-aged every man who at times is jaded, discouraged, and bewildered. Foxx is able to run through Joe’s gamut of emotions perfectly, and really brings him to life.

Similarly, Tina Fey as 22 is an excellent mix of stubborn rebelliousness, hidden insecurity and innocent joy. The two are a perfect contrast, and allow viewers to bounce back and forth from empathy with, and annoyance at, their characters as the story progresses.

Angela Bassett as jazz superstar Dorthea Williams and Phylicia Rashad as Joe’s mother, Libba Gardner, also deliver fantastic performances. Bassett’s Dorthea Williams is glamorously intimidating, while Rashad’s Libba Gardner is fierce, yet warm. It’s hard to imagine two women more perfectly suited for their respective roles as you could cast both as live-action versions of their characters and not miss a beat.

Finally, I appreciated the message of this film so much. Joe spends the whole film thinking that the “spark” that souls need is equivalent to passion. That’s why he’s so convinced that his passion for jazz would allow him to reverse death. But as the humorously named after-life being named “Jerry” tells him late in the film, spark isn’t “purpose” in life; it’s simply being ready to live. Joe wasted so many years focusing on what he thought needed to live, instead of actually living his life. Indeed, the film warns that those who become overly obsessed with their passion can become detached from life and go to a dark place.

The character that most embodies the film’s central message is Joe’s barber Dez (voiced by Donnell Rawlings). Dez is a scene stealer in the movie (and has already generated some thirst buzz online). Dez tells Joe that he hadn’t planned on cutting heads for a living. He wanted to be a veterinarian, but his daughter got sick and being a barber was how he could make a living and support his family. In all the years that Joe had been getting his hair cut, he never asked about Dez’s life because he was too focused on his own dreams. Dez makes it clear though that despite life’s unexpected circumstances, he’s “happy as a clam” because being a barber allows him to meet interesting people and make them happy. Unlike Joe, Dez has embraced the beauty and joy in his life.

From an in-film perspective, the parts that didn’t quite resonate with me were the afterlife elements. The place where Joe ends up after he dies is intentionally vague and ambiguous, full of formless beings and these strange, almost 2-dimensional characters called “Jerry’s” and “Terry’s”. The pre-human souls are adorable and look like water droplets, but everything else about that part of the film wasn’t memorable. If there’s a villain in the story, it’s one of the “Terry” beings who is determined to bring Joe’s soul back to the afterlife, but the character isn’t developed much and is just barely integral to the plot.

Out of universe, I know there’s concern that Soul is a film about a Black character that spends much of the story not as a human, but instead as a formless soul and later a cat. Indeed, for most of the film, Tina Fey is the voice of Joe’s body. In media and pop culture, there’s a disturbing trend of having Black characters reduced to non-human beings for stories that are supposed to be about Black people. Those concerns are completely valid and all storytellers need to take an honest look at that trope. However, as I discuss below, Soul is a production where Black creatives behind, and in front of, the camera played major roles in shaping this story, and hopefully that fact will help assuage some of those very valid concerns.

Soul is Disney Pixar’s first ever film centering a Black character. It not only has an overwhelmingly Black cast, but co-writer and co-director Kemp Powers (One Night in Miami) brings an authenticity to Joe Gardner’s story that’s lovely to see on screen. As Powers said at the global press conference, he intended to inject as many authentically Black elements into the film as possible, and one crucial example is the barbershop scene:

I remember Joe getting a suit was a plot point. And I said to [director and writer] Pete [Docter], he also needs a haircut, right? And someone said, “Well, the haircut isn’t as important as the suit.” And I was like, I wouldn’t have even come up to Pixar for the interview if I couldn’t have got lined up. So I’m gonna disagree and say that, that haircut is every bit as important as the threads.

In addition to Powers’ important voice, Pixar brought in an all-star consulting team led by Head of Diversity and Inclusion, Britta Wilson, and including Dr. Johnnetta Cole, Daveed Diggs, Bradford Young, Questlove and Ryan Coogler. Finally, Pixar formed a creative trust of Black employees at the company to contribute to the film’s authenticity on a daily basis.

It genuinely seems that Pixar developed this film the right way, by having a variety of Black voices come together to tell a Black character’s story.