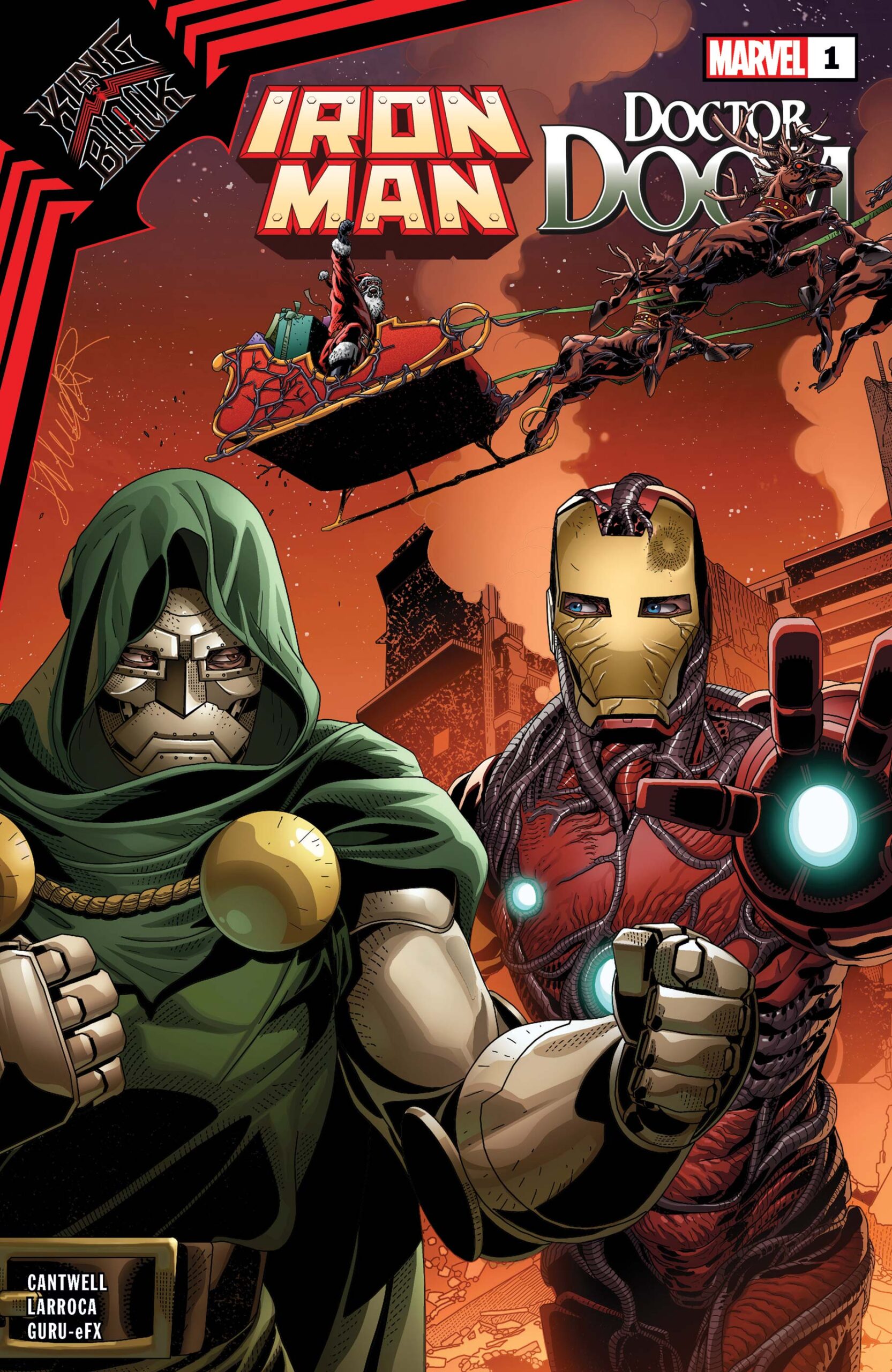 We’re knee deep in King in Black crossovers and tie-ins. I’m always a bit mixed on massive tie-in events, because there’s always the linger question of how necessary a tie-in is to enjoy or even enhance the primary storyline. Sometimes tie-ins are great, but when they feel pointless, it’s really frustrating. The King in Black tie-ins have been interesting because books that seem like they wouldn’t be important (Black Cat #1 or Spider-Woman #7), have turned out to be genuinely intriguing additions to the overall plot and I think fans would enjoy them.

King in Black: Iron Man/Doctor Doom #1 on its face seems like it would be a very important tie-in based on the simple fact that Iron Man and Doctor Doom are such important players in the Marvel Comics universe. If there’s a global threat like Knull, Tony and Victor would be expected to respond in their own ways.

At the outset, I’ll say that this book is very different from what I expected. It’s quirky, humorous and Christmas themed. I wouldn’t have expected to describe an Iron Man and Doctor Doom book with any of those three phrases. The story itself is kind of strange, and probably not overly critical to the overall Knull storyline. However, cleverly inserted into the book is an element that could end up being the key to Knull’s defeat!

Below is my non-spoiler review. King in Black: Iron Man/Doctor Doom #1 releases this Wednesday at. your local comic book store!

Writer: Christopher Cantwell
Penciler: Salvador Larroca
Cover Artist: Salvador Larroca
Iron Man has risked everything to save Eddie Brock, but now he’s left with nothing but guilt. As longtime ‘frenemy’ Doctor Doom shows up with both counseling words and ulterior motives, they’lll be forced to battle an all-too-familiar specter of the holiday season—albeit one now twisted and controlled by the recent invasion of Earth by the symbiote homeworld. As Iron Man and Doom fight as temporary allies, their unexpected encounter both with each other and a horrifying inversion of yuletide joy may ultimately reveal to them the true meaning of Knull-mas.

The most interesting thing about this book is that it takes place almost immediately after the events of King in Black #2. Tony is still trying to deal with the impact of what happened in that book and he’s still in the symbiote infected armor. First of all, the sinewy organic look mixed in with Tony’s high-tech armor looks damn cool. Based on this story, that armor might be around for a while and could play a role in the larger King in Black storyline.

Beyond that, Cantwell and Larroca tell an unexpectedly light and funny Christmas story. It’s a bit jarring at first because the plot and overall tone is so different than one might expect going into this book, but once you adjust, the story is enjoyable with some nice human moments for both Tony and Victor.

In many ways, Tony and Victor are a natural pairing, either as opponents or a reluctant team. However, Victor kind of just shows up in this story with no real explanation. And Tony’s response to Victor’s sudden appearance is also strange. The unlikely duo feel awkwardly forced together for this story and it never really feels natural.

The art overall is solid, but when it comes to Tony and Victor’s armor, the discrepancy seems…stark (sorry). There are a few moments when Victor makes snide comments about Tony’s intelligence and tech, but given that the art makes Victor’s armor look dated compared to Tony’s, those moments border on absurd. It does make you wonder a bit how Doom’s armor isn’t constantly updated like Tony’s is.

Sadly aside from Spanish artist Salvador Larroca, this book rates low in diversity. It’s a book about Tony and Victor (and another surprise character), and all three are white characters. Larroca’s art is fantastic though. He’s teamed up with Cantwell on the on-going Doctor Doom solo series and will be working with Phillip Kennedy Johnson on a new Alien book in 2021!