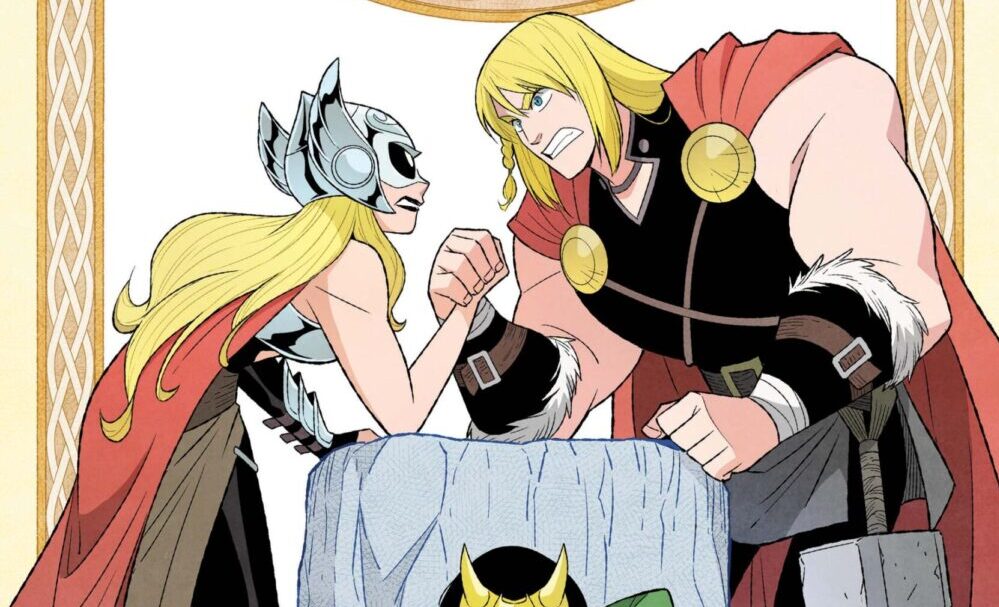 Thor and Loki are transported to an alternate universe and between their arguing with each other and battling a group of giants, they’re united with a familiar visitor (familiar to readers anyway), Thor – Goddess of Thunder! Will she be able to help the brothers find their way home or is more trouble afoot for the bickering pair? Well, you’ll just have to read the issue to find out.

Be sure to check out my reviews for issue one and issue two if you haven’t already!

Writer: Mariko Tamaki
Penciler: G Gurihiru
Cover Artist: G Gurihiru
Thor and Loki are transported to an alternate universe where they run into the Goddess of Thunder: JANE FOSTER! Can she help these misbehaving brothers find their way home?

Thor and Loki Meet their Match in Jane Foster, the Goddess of Thunder!

By now you’re probably wondering how it is possible for Thor and Loki to get up to many more shenanigans. Well, as per the usual, the two brothers continue to defy the odds. After Loki steals some ancient artifacts, awakens the Midgard serpent, angers the Allfather, Odin, and continues to argue with Thor, he realizes that he’s lost the orb (something else he’d stolen) and now the pair cannot get back home.

Arriving on what Thor believes to be Jotunheim, the two brothers argue some more and search for the orb. Of course, their new mission is not without some bumps in the road – including a battle against some giant troll-like creatures. However, the pair are saved by the arrival of an unexpected guest: Thor, Goddess of Thunder! Unaware of one another in the timeline the comic is set in, it makes for a rather hilarious meeting; not to mention a battle of wits and strength between the pair of Thors.

Much like the first two books in the series, Mariko Tamaki knocks it out of the park with the dialogue throughout. The comedic elements are on-point and the banter between the brothers is top-tier. Most of the time while I’m reading, I find myself wishing that each book was longer, simply to further revel in all of its fun. Issue after issue, I wonder how Tamaki will keep the tale of Thor and Loki going, and each time there is something new. Tamaki knows what makes this series great and sticks with that, but also finds a way to inject more adventure, amusement and humor into the pages with each book.

Everything in the comic is tied together perfectly with G Gurihuru’s artwork. Every facial expression from Thor and Loki is perfect, and in addition to the storyline, the artwork keeps the reader engaged with every turn of the page. It is definitely something that would translate well to an animated series (are you listening, Marvel Studios and Disney+?!). I have continually had a great time while reading Thor & Loki: Double Trouble, and I am both excited and sad to see what the final issue has in store when it releases in a few weeks.