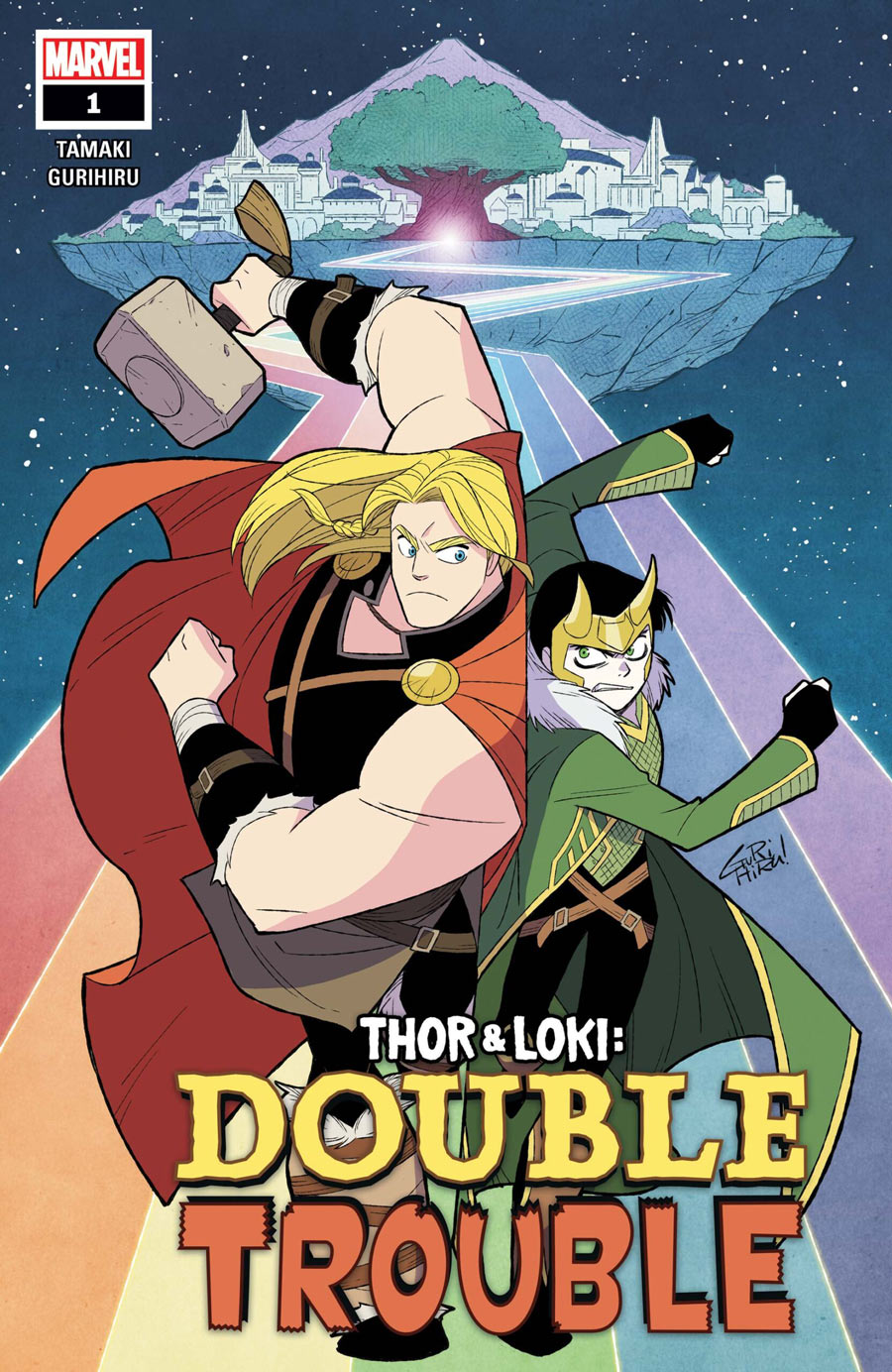 Loki is doing what Loki does best – causing mischief and getting his brother Thor into trouble. Of course, while Thor does his best to stay out of this trouble, he cannot resist a dare. His trickster brother knows this and always uses it to his advantage. Easily goaded, Thor joins Loki and the brothers end up taking a relic from Odin’s vault, and with that comes an unexpected mess that the brothers must fix.

Writer: Mariko Tamaki
Penciler: G Gurihiru
Cover Artist: G Gurihiru
They’re brothers, gods and sons of Odin — but Thor and Loki just don’t get along! Especially since Loki keeps tricking Thor into doing things that will get him in trouble. Even so, when Loki dares Thor to steal a powerful relic from Odin’s vault, how can the God of Thunder say nay? The fan-favorite team that brought you SPIDER-MAN & VENOM: DOUBLE TROUBLE returns!

In Mariko Tamaki’s Thor & Loki: Double Trouble #1, the fun never stops. From the very beginning, we see Thor living his best life until Loki appears and instantly begins to engage Thor in some mischievous mess. In the midst of the citizens of Asgard showering him with affection, Thor does his best to both brush off and avoid any of Loki’s constant baiting. The Trickster God is content in finding ways to lure his brother into the fold and when he finally succeeds, the two come face-to-face with the Midgard serpent.

Tamaki nails the dialogue between the pair in the barbs they send one another’s way, the teasing and arguing about who got whom into more trouble. It’s reminiscent of the scene in Thor: Ragnarok where Thor tells Valkyrie the tale of Loki turning himself into a snake in order to trick him. Tamaki’s great script is complemented by fantastically fun artwork by Gurihiru, which captures every moment of playfulness and quarreling between the brothers. Their facial expressions throughout the comic book are hilarious and on-point.

If you’re a fan of Thor and Loki, you’ll definitely want to check out Tamaki’s latest comic. As I said earlier, the dialogue that Tamaki created is perfect, and it’s certainly easy to see that Tamaki has a great handle on the bantering brothers. Thor & Loki: Double Trouble #1 is lively, fun, and will most definitely make you laugh. That is what sets this book apart from most of the comics I’ve been reading lately. At times, you just need some light fun and a good laugh. In this respect, Thor & Loki: Double Trouble #1 definitely delivers!

The only thing I could say for “the bad” is that while I personally enjoyed the comic book, it might skew a little young for certain readers. Aside from that, you’ll find zero complaints or criticisms from me. Thor & Loki: Double Trouble #1 is an enjoyable read for all. I cannot wait to see how the pair fares against the Midgard serpent when the second comic in the series releases!