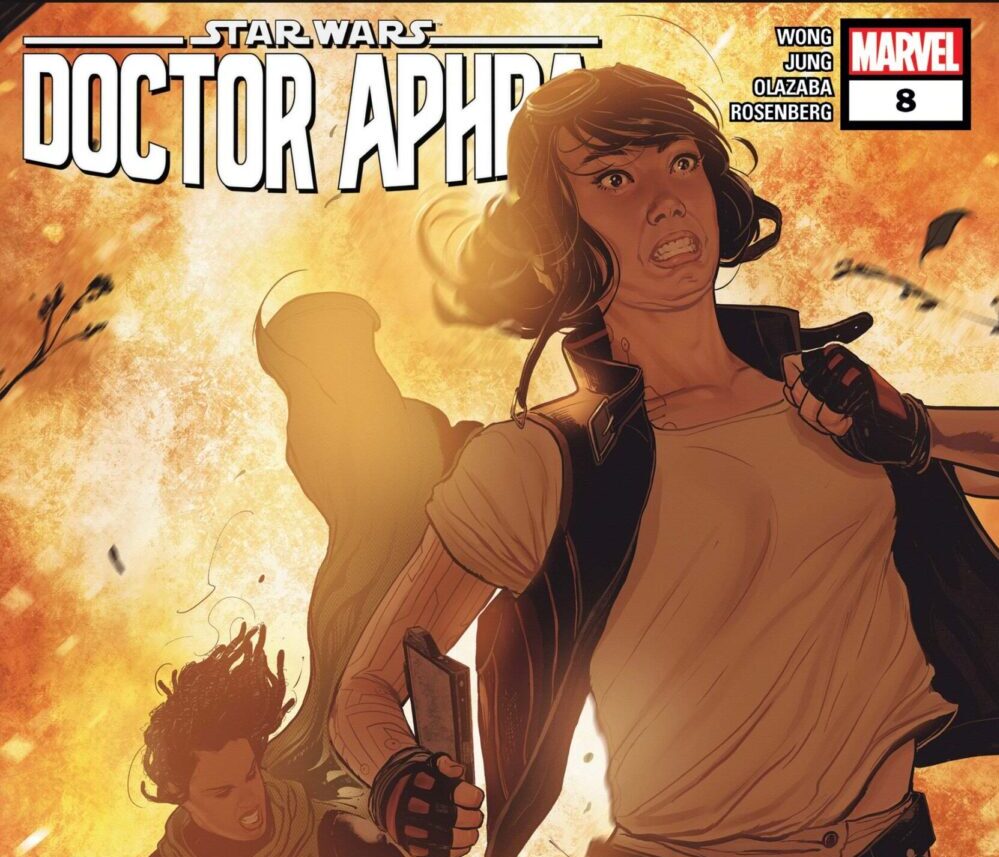 Marvel Comics’ Star Wars: Doctor Aphra continues to be one of the best, if not the very best, on-going Star Wars comic right now. Writer Alyssa Wong simply gets the character so well, and Minkyu Jung’s art is consistently beautiful.

Writer: Alyssa Wong
Penciler: Minkyu Jung
Cover Artist: Joshua “Sway” Swaby
OLD WOUNDS! After a narrow escape, APHRA and SANA’s investigation takes them to the site of an ancient battlefield! But VUKORAH and the UNBROKEN CLAN are hot on their heels! What answers await them amid the devastation?

This issue continues to cement Aphra as my favorite character and series. Doctor Aphra is on the hunt to steal experimental hyperdrive technology from Domina Tagge’s rival, Beol of De’rruyet industries. Domina Tagge hired Aphra to steal the proclaimed Nihil Path engine, which Beol says they can replicate. This would financially ruin the Tagge dynasty, thus Aphra is the one for the job! Aphra chooses to bring someone she can trust along for this, so she finds Sana Starros and this issue finds them on the hunt for clues. Unfortunately, they are not the only ones interested in this galaxy altering technology.

In this issue, we find Aphra and Sana on Dol’har Hyde, a planet with a beautiful forest and trees that grew around Nihil ships. While inspecting the insides of a Nihil ship, Aphra comes to the conclusion that the one Beol De’rruyet discovered is a fake. At this point General Vukorah from the Unbroken Clan catches up to them, and Aphra does what Aphra does best.

The art is this series has always been great, but everything in this issue is stunning. I am obsessed with the design of the planet Dol’har Hyde. Sana states the Nihil ships engulfed by trees happened quicker than normal; this makes me wonder if at some point during the High Republic content we’ll visit this location and see some Force related action.

Alyssa Wong’s depiction of Aphra is perfect, as is her relationship with Sana in this series. Aphra always has a complicated relationship with people from her past, but they end up saving each other in the end. Sana mentions what Aphra did to Tolvan, at which point I may have made a really loud noise. If Tolvan ever shows up in this series I am going to lose it. I would love for this series to bring back all of Aphra’s past love interests into a single arc and let the chaos ensue.

Aphra mentions that she thinks her droids are freelancing, and that’s terrifying. I wonder if her past is going to catch up to her in the War of the Bounty Hunters event, as it will include all the ongoing series.

For the past couple of issues, it has cut from Aphra’s adventures to show us Lucky doing jobs to protect his younger brother, who’s in debt to the Sixth Kin, a criminal organization that operates in Canto Bight. In the next issue we’ll likely see him take a job leading him to clash with Aphra yet again. I’m really interested in Lucky, but I feel a little teased when we switch back and forth.

My big nitpick is that I want the next issue right now, but between the beautiful art and the terrific writing, I’m happy to wait so they can bring us another solid issue next month.