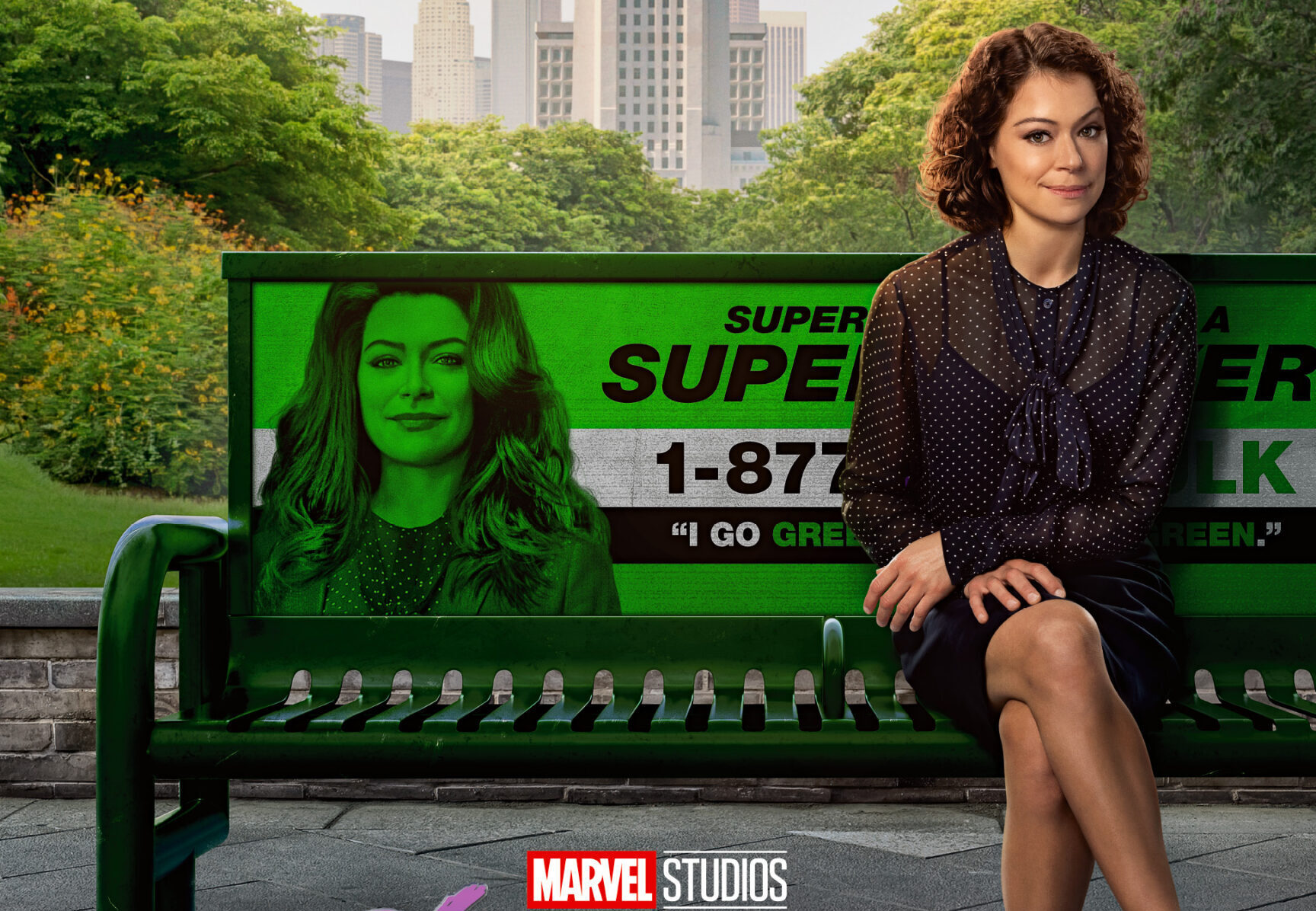 Jennifer Walters/She-Hulk first appeared in comics in February 1980 in The Savage She-Hulk #1. Created by Stan Lee and John Buscema, the character has been a member of the Avengers, S.H.I.E.L.D. and even the Fantastic Four. Known for her intelligence, wit and breaking the fourth wall, Walters has endured for decades and finally makes her live-action debut in Marvel Studios’ She-Hulk: Attorney at Law.

Led by head writer Jessica Gao, directors Kat Coiro and Anu Valia and star Tatiana Maslany, She-Hulk is full of levity, providing a fresh spin on the superhero origin story that impacts the rest of the Marvel Cinematic Universe.

She-Hulk: Attorney at Law might very well be the first Marvel Cinematic Universe series that takes full advantage of TV as a medium. It doesn’t feel like an extended feature film that was cut up into six parts. Many of the MCU shows on Disney+ have felt like stories that were meant to be told in feature film format, overlooking some of the elements that make a TV series unique. With She-Hulk, Marvel Studios more fully embraces TV.

It starts with hiring a creative team comfortable with the medium and it’s hard to do better than head writer Jessica Gao, known for her work on the beloved animated series Rick and Morty, for which she won a Primetime Emmy for Outstanding Animated Program. Gao has been very public about her desire to play in the MCU sandbox and her specific love for She-Hulk as a character, and her passion comes through on screen. Gao has pointed to the classic John Byrne run of Sensational She-Hulk as her inspiration and the comic elements are clear in this series. It’s fun and light and doesn’t take itself too seriously. Much like the book, it’s also very self-aware and engages with the audience regarding elements in the real world (including the inevitable meltdown by angry fanboys). Fans of the comics should feel very much at home with this series.

The cast is once again a home run, led by the incredibly charming Tatiana Maslany, who expertly balances the dueling lives of Jennifer Walters, the attorney, and She-Hulk, the newly minted superhero. This is a superhero origin story, but one that takes a different path than most we’ve seen thus far. Walters doesn’t want to be an Avenger. In fact, she doesn’t find that life to be appealing at all, practically asking how superheroes in the MCU make money (remember Sam Wilson applying for that business loan?). Instead, Walters invested much of her blood, sweat and tears into pursuing a legal career and she doesn’t intend to let a little green skin deter her. Maslany checks all the necessary boxes to lead a series like She-Hulk – she’s funny, determined and unimpressed by all the craziness around her.

Ginger Gonzaga as Walters’ best friend and colleague, Nikki Ramos, is another gem. Gonzaga has an infectious energy as Ramos and is the exact kind of moral and emotional support that we all need from our friends. When Walters is struggling with uncertainty or confusion, Ramos is there to pick her up with positivity and give her the boost she needs. Gonzaga lights up the screen and the chemistry between her and Maslany genuinely gives off the impression that the two hang out off-camera.

The series is also full of notable guest appearances, including Benedict Wong as the Sorcerer Supreme, Tim Roth as Abomination and of course Mark Ruffalo as Bruce Banner/Hulk. All three are excellent in their roles, but it’s particularly delightful to see Roth, who makes his return to the MCU for the first time since 2008’s The Incredible Hulk. Here, Roth gets to show a much more interesting and entertaining version of his character and if you weren’t excited about the return of Abomination in the MCU, you will be after watching Roth’s performance.

At this point, fans know what to expect from both Wong and Ruffalo, who are very comfortable in their respective roles and who continue to be two of the best characters in Marvel. She-Hulk is a perfect fit for Wong’s comedic inclinations and he finally has a setting where he’s not the sole comedic element surrounded by serious characters. One can only hope that Wong’s appearance in this series brings him (and us) one step closer to a Disney+ series of his own.

It’s worth noting that Charlie Cox as Matt Murdock/Daredevil, who was previously announced to appear in the series, does not show up in the first four episodes. We will all have to wait until the back half of the show to see more of our favorite Netflix transplant.

As much as She-Hulk embraces the TV medium, it suffers from the same plight as many shows – a rocky pilot. The first episode of has a lot of ground to cover and it takes some time to find its gamma infused legs. Bruce Banner plays a substantial role early on, and disappointingly, the moments with Banner and Walters together are some of the show’s weakest scenes. In the later episodes, where Banner takes more of a backseat, Walters and the series as a whole are able to bloom.

Much has been made of the CGI in the trailers, and while I’m not one to be particularly critical of the visual effects, having both “Smart Hulk” and She-Hulk together for extended sequences does lend to some noticeable inconsistencies. She-Hulk is supposed to be 6′ 7″ tall, which, for a real world comparison, is the same height as Los Angeles Clippers basketball star Kawhi Leonard. But throughout the first few episodes, She-Hulk’s relative size compared to Smart Hulk (who is said to be around 8′ tall) and regular humans looks inconsistent. At times she looks the same size as Smart Hulk, and at others she looks barely bigger than an average human. Making things even more befuddling is that her clothes are completely unaffected when she changes from Jennifer Walters to She-Hulk. Maslany is reportedly 5′ 4″ and seeing her in a suit change to 6′ 7″ She-Hulk wearing the same suit is strange.

While the cast as a whole is thoroughly enjoyable, there is far too little of Jameela Jamil’s Titania in the first four episodes. Positioned as She-Hulk’s arch-nemesis, Titania makes only a few brief appearances that feel jammed into the storyline. It’s the way Titania is handled early that makes me thankful that She-Hulk is a nine-episode series instead of the more common six. There is certainly still time to give Titania an interesting storyline that carries the show into the finale. It seems the intent was to tease Titania early on, giving She-Hulk the room to develop as a character, but the early teases leave a lot to be desired.

With She-Hulk, Jessica Gao is the first Asian woman to serve as lead writer for a Marvel film or series and she heads a very diverse writers room that includes Cody Ziglar (Craig of the Creek), Kara Brown (Grown-ish) and others. If the path of writers on other Marvel shows are any indication, hopefully this leads to more opportunities in the MCU for Gao and her fellow She-Hulk writing team.

The series also includes a wonderfully diverse cast, with Gonzaga, who is half-Filipino, and Jamil, who is South Asian, featured prominently. Benedict Wong continues to delight as the most visible Asian character across Marvel shows and films. Episodes 5, 6 and 7 are also directed by Anu Valia, who is of South Asian descent.