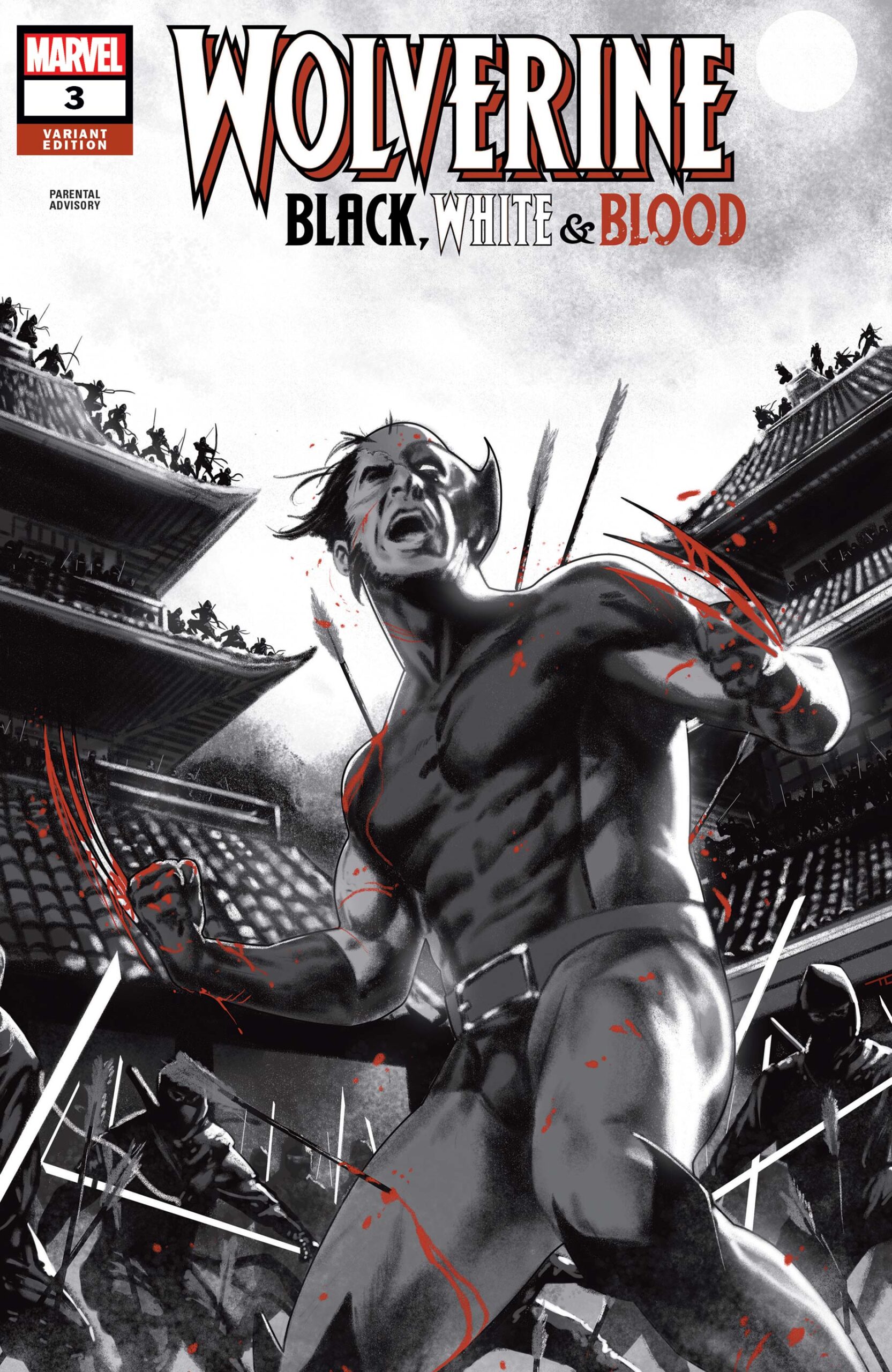 A new trio of tales featuring the Wolverine is set to simultaneously have you in your feels, make you laugh and make you wonder if all those discussions about traveling to Mars are really worth it. With many uses of his adamantium-laced skeleton, heightened senses and healing factor, Wolverine: Black, White & Blood is another solid entry in Weapon X’s lore.

Writers: John Ridley (“32 Warriors and a Broken Heart”), Donny Cates (“Burn”) & Jed MacKay (“Red Planet Blues”)
Pencillers: Jorge Fornes (“32 Warriors and a Broken Heart”), Chris Bachalo (“Burn”) & Jesus Saiz (“Red Planet Blues”)
Cover artist: Jorge Fornes
THE BEST THERE IS BY THE BEST THERE ARE! The groundbreaking series continues! Thrill to the Marvel Comics debut of Oscar winner JOHN RIDLEY 12 Years a Slave, The American Way) as he and JORGE FORNÉS bring LOGAN to Japan, where he will question his honor as he clashes blades with the SILVER SAMURAI! Then, it’s back to his X-FORCE days with JED MacKAY and JESÚS SAIZ, as WOLVERINE must stop A.I.M.’s plot for the red planet! And, nothing can prepare you for the unstoppable team-up of DONNY CATES and CHRIS BACHALO as Wolverine has a run-in with…COSMIC GHOST RIDER?!

Just like the two books before it, Wolverine: Black, White & Blood #3 is another thrilling look at new and different tales of the iconic claw-bearing superhero. With three stories to delve into, Wolverine: Black White & Blood is action-packed from start to finish. With John Ridley and Jorge Fornes’s “32 Warriors and a Broken Heart”, we see a solemn Logan who is dealing with the personal guilt as it pertains to his adopted daughter, Amiko. As he tussles with the Silver Samurai, Logan is pensive, looking back on one of his past fights with one of his most well-known villains. As intriguing as this is, it is really his look into the past altercation that is truly the heart of the story.

While we know that Wolverine can be a killing machine, he also has a caring side, which is expertly explored in Ridley’s work with this story. We see Logan as a family man as he struggles between his duties with the X-Men and his duties as a father. As he tries to find the balance, he loses his daughter in the process (literally and figuratively). Ridley does a wonderful job in showcasing the best of Wolverine – the more human side of him, and the constant struggles he’s gone through in order to defend mutants and humans alike, as well as his family.  Beautifully written and compelling, I would love to see Ridley tackle more Wolverine in the future.

In “Burn”, Donny Cates and Chris Bachalo give us a wonderfully fun anecdote between Wolverine, Cosmic Ghost Rider (Frank Castle) and the Juggernaut. As Wolverine and Castle bond over beer, the pair get to talking about why Castle is here in the first place. When he divulges that he’s from the future and knows about the poker nights with Gambit and Thing (just to name a few), Castle points out that future Wolverine would always chat about a fight that happened on this particular night. Of course, Castle decided to be there so he could witness it first-hand.

However, he didn’t take into account that his being there would alter the events and what we get left with is a crazy fight that has Logan going toe-to-toe with the Juggernaut. Cates’s dialogue between the two will certainly leave you laughing, as will the ensuing shenanigans that follow. It was lighter fare in terms of content in comparison to “32 Warriors and a Broken Heart”, but still great fun nevertheless.

Lastly, we have Jed MacKay and Jesus Saiz with “Red Planet Blues”. In this story, we find Wolverine (transported by Magik) on Mars. While she asks if he requires help, Wolverine decides to go it alone and save the red planet from the four who are trying to stake their claim on it. Of course, there are dastardly intentions to their plan and if Wolverine has any say, he will get rid of these interlopers before they found this new colony on Mars and destroy Earth in the process.

MacKay brings us back to what readers are accustomed to when it comes to the X-Men characters: saving the world. Time and time again, they defend a world filled with people that both fear and hate them. Wolverine has been around long enough to know what humankind is like and what they’ve done. But still, he helps them. With great action sequences strikingly drawn by Saiz, “Red Planet Blues” was an exciting foray with some of the things that make Wolverine the best he is at what he does.

To be quite honest, I do not necessarily believe there is anything “bad” in Wolverine: Black, White & Blood. The only thing I can comment on is the fact that I don’t believe that all three stories necessarily mesh well together. Obviously, they are standalone stories, but perhaps something that could have made the book even better would be to tie the stories together with like themes or stories that held the same amount of weight. For example, “32 Warriors and a Broken Heart” had a very personal narrative, while “Burn” and “Red Planet Blues” are both very much a rock ‘em, sock ‘em kind of affairs.

So, while all three are great in their own respective ways, there isn’t a tether that brings them all together. Again, this is not something I would call “bad” per se, but as I was a little more partial to Ridley’s story (which is the first in the comic), I suppose I was expecting that the following two stories from Cates and MacKay would follow along in the same vein.