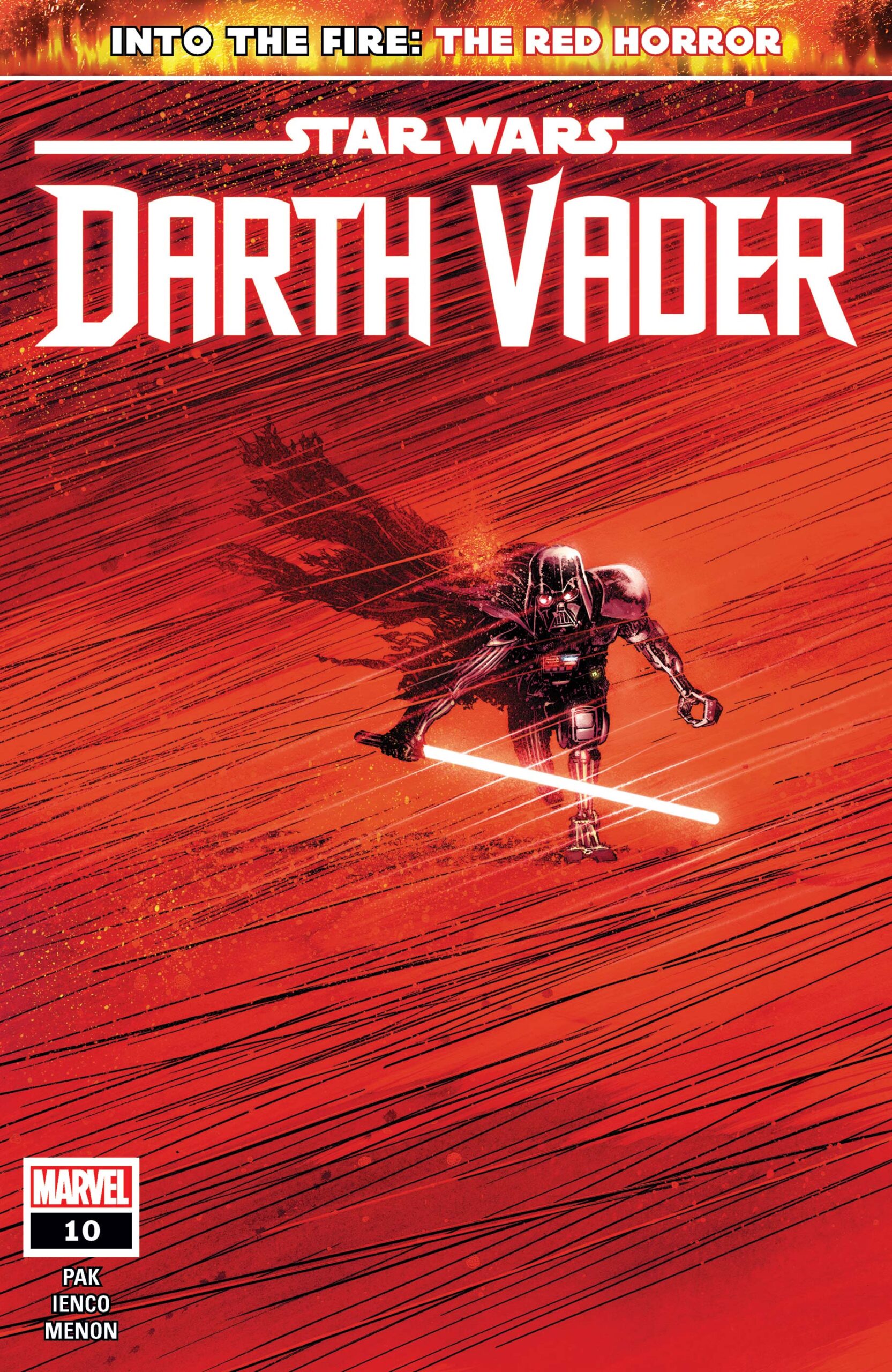 Marvel Comics Star Wars: Darth Vader #10 continues Greg Pak’s “Into the Fire” arc, where Vader is stranded on Mustafar. Following Vader’s rebellion in the first five issues, the Emperor brutally punished Vader, not only for ignoring his master, but to instill fear in him once more. He was hunted by Ochi of Bestoon and his droid mercenaries, whom he not only restrained but also used for parts. He also survived the test of the Eye of Webbish Bog, which no one has previously accomplished, and acquired a Sith Wayfinder. Vader’s next move? Find Exegol and discover what his master’s plan for the galaxy is.

Star Wars: Darth Vader #10 is available now at your local comic book shop. There will be a spoiler warning below when I discuss what was not in the previews for this issue released this week.

Writer: Greg Pak
Penciler: Raffaele Ienco
Cover Artist: Aaron Kuder
THE RED HORROR! After passing the test of THE EYE OF WEBBISH BOGG, DARTH VADER has learned the route to the hidden location of THE EMPEROR’S greatest secrets! But in THE RED NEBULA along the way, can Vader survive the onslaught of the greatest predator in the galaxy? Especially if the monster’s most brutal attack transcends the physical? And what horrors await the Emperor if a transformed Vader makes it to his dark door?

What is the Emperor building on Exegol? In this issue, as Vader and Ochi arrive at Red Space near Exegol – as seen in Star Wars: Episode IX The Rise of Skywakler – a giant, menacing space creature floats in their path. We learn this creature is a Summa-Verminoth, the galaxy’s greatest predator. The issue opens with the Summa-Verminoth staring Vader’s ship down, Vader is determined to get through but the Umbaran from prior issues shows up with three Star Destroyers to complete Ochi’s mission – kill Vader. Facing three Star Destroyers, housing hundreds of TIE fighters, and the Summa-Verminoth, can Vader accomplish his goal?

For action loving Vader fans, this issue will not disappoint. This story is action-packed, between the stunning art from Raffaele Ienco and the colors by Neeraj Menon, the action and flow of the panels really stand out; it feels like Star Wars. It’s epic. The lettering with Vader’s speech bubbles has a black fill with white letters, as opposed to the normal black text on white bubbles, which is also a great design choice. One of my nitpicks with Star Wars literature sometimes is that I don’t always buy the way a certain character’s dialogue is written. I don’t have that issue with this series, as I feel like I can almost hear James Earl Jones speaking these lines.

About the Umbaran from a few issues ago? Continuing Ochi’s mission after his failure: that’s Sly Moore! Greg Pak confirmed this on twitter. Prior to knowing this, I found the Umbaran to be a really intriguing character, especially in design, and I hoped we would learn more at some point. Now I need to learn more! If Sly Moore sounds familiar to you, she served as a senior administrative aid to Chancellor Papatine, and can be seen in the Star Wars films Attack of the Clones and Revenge of the Sith.

In the middle of the issue, we learn that the Summa-Verminoth can attack on a mind level; Sly Moore says “If it fails to crush your body…it will surely break your mind,” after which, we see flashback scenes from Vader’s past, intended by the creature to break him. Vader survives, and crash lands on Exegol.

As someone interested in art, I really appreciate the art in this issue. For such a massive battle, and what must have been a painstaking amount of TIE Fighters to draw, I enjoyed the art style and the colors during the flashback sequence.

In the end, Vader uses the Force to kill the Summa-Verminoth, which was strictly prohibited by his master. Vader doesn’t care, and I think we have reached the end of Vader wallowing in his grief from his past. He is someone to be feared and insanely powerful in the Force. I’m a big fan of all the sides of Vader, but there is something else about Vader in his prime. Through the Force, all is possible.

The use of flashbacks. Initially, I found their usage perfect with different scenes from the Star Wars prequel films coming up as Vader revisited the locations in those scenes. Ten issues in, I don’t know if seeing Vader’s fight with Obi Wan on both the Death Star, and Mustafar have as much impact, since they feel a little repetitive. I hope we almost stop the flashbacks entirely going forward in this series. This is Vader before Return of the Jedi, and he seems to be playing these scenes in his head too often. With the three Vader runs we’ve had so far, the flashbacks have narrative value within this story, but there’s a point where it feels more like going through the motions.

During the flashbacks montage, I was hoping there would be a panel with Ahsoka Tano. She is as integral to Anakin’s story as Obi-Wan Kenobi is. She helped him realize the Jedi are flawed, and I imagine fighting his former padawan would be another heavy moment on Vader’s heart. Since she’s shown up in a flashback before in the Star Wars: Doctor Aphra comic, and also in the Charles Soule Darth Vader run, I thought it could be impactful. I’m sure they had reasons for not including her that I didn’t see, and not everyone knows their whole relationship, but one panel might have added intrigue to those who are unaware.