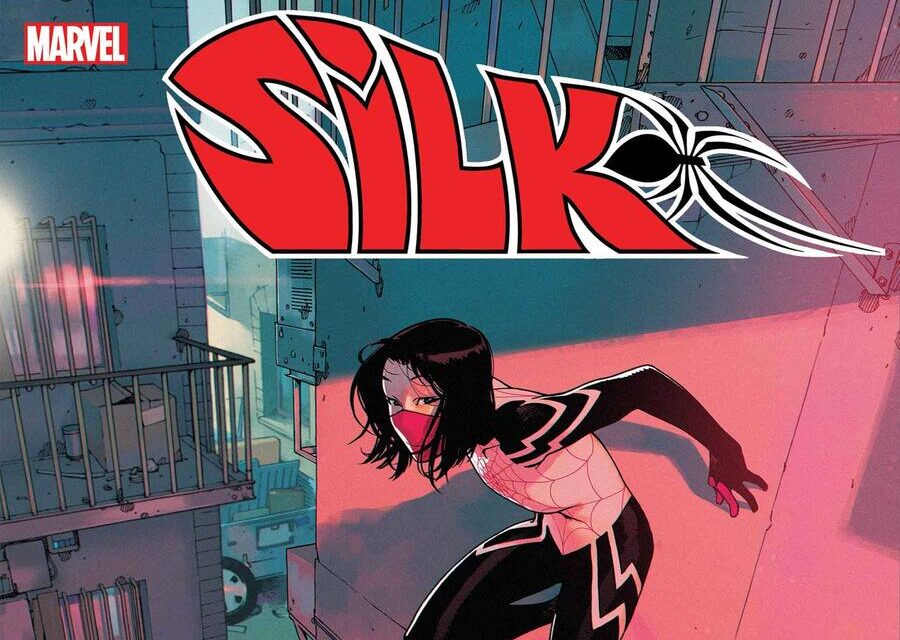 Cindy Moon is finally back with her very own series. Moon’s last solo title ended in 2017, and since then she’s appeared in various Spider books and was one of the leaders in the New Agents of Atlas.

This month, Moon, also known as Silk, returns in her own series written by Maurene Goo with beautiful art by Takeshi Miyazawa.

Silk #1 is available at your local comic book shop now!

Writer: Maurene Goo
Penciler: Takeshi Miyazawa
Cover Artist: S Stonehouse
By day Cindy Moon is an intrepid reporter for the upstart new media empire Threats & Menaces under her old boss, J. Jonah Jameson. By night, she’s Silk, crime fighting super hero! But those worlds are about to collide, as an investigation into a series of gangland murders puts Silk and everyone she loves in danger! Who is this powerful new player in New York’s underworld, where did she come from, and what is she doing with that strange cat demon? It will take all of Cindy’s prowess as reporter and hero to find the answers…and stay alive! Written by Maurene Goo (I Believe in a Thing Called Love) and drawn by Takeshi Miyazawa (RUNAWAYS, GHOST SPIDER), Cindy is on assignment, and nothing can stop her!

Cindy Moon is following in the footsteps of Peter Parker, stopping crime by night, and working for J. Jonah Jameson as a freshly minted reporter for Threats & Menaces.

On her first day on the job, she gets a chance to visit the unusually gruesome crime scene of the Mulligan Gang, who have been brutally murdered. The nature of the killings raise questions, and Moon eagerly publishes an article covering the murder.

The unwelcome news coverage causes members of a mysterious group to attack Jameson, who they hold responsible for the piece. Moon intervenes as Silk, since it’s partly her fault Jameson is being threatened anyway, and he hires her to be his “body guard” while they figure out who’s responsible.

Moon investigates and discovers some connection to a tech company called Fujinet and its new head, Saya Ishii.

Takeshi Miyazawa’s art is pitch perfect for Cindy Moon and this series. His art style is fun but not overly exaggerated, with hints of manga. The key to me is just the hint of manga without making it feel like the book is trying to be manga.

Maurene Goo, who is Korean-American and an established YA novel writer, brings an authentic voice to the book that makes Cindy Moon the civilian as interesting as Silk the superhero. That’s not an easy balance. Indeed, in this first issue, Cindy’s interactions with her colleagues at Threats & Menaces and her brother Albert are definite highlights.

Don’t get me wrong, the action is excellent as well. Miyazawa does an excellent job of showing how dynamic Silk is as she takes out groups of criminals.

The introduction of Saya Ishii as a potential arch enemy is an interesting set up, and I’m eager to see what Goo has planned for the character and her dynamic with Silk.

Ishii as the head of a potential nefarious organization is exciting. The weird talking werewolf looking creature that Ishii is working with looks less exciting. This is really a nitpick because we don’t get much of the villains in this issue, but the creature design felt generic and I’m not overly intrigued with a storyline that involves werewolf like characters. Here’s hoping the creatures are taken in unexpected directions as the story progresses.

Going along with Marvel’s theme of late to finally give Asian creators the chance to take the reins of Asian superhero characters, it’s thrilling that Goo and Miyazawa are telling Silk’s story. Goo’s authentic touch is all over the book, including small easter eggs like an empty bag of shrimp chips laying on the floor of Moon’s room.

When I glimpsed the panel of Moon’s room, I thought to myself that it would be fun if a bag of shrimp chips were there, and then to see that actually included was so much fun.

Moon’s Korean-American identity hasn’t been explored much in her character history and I look forward to Goo integrating that part of Silk in her story going forward.