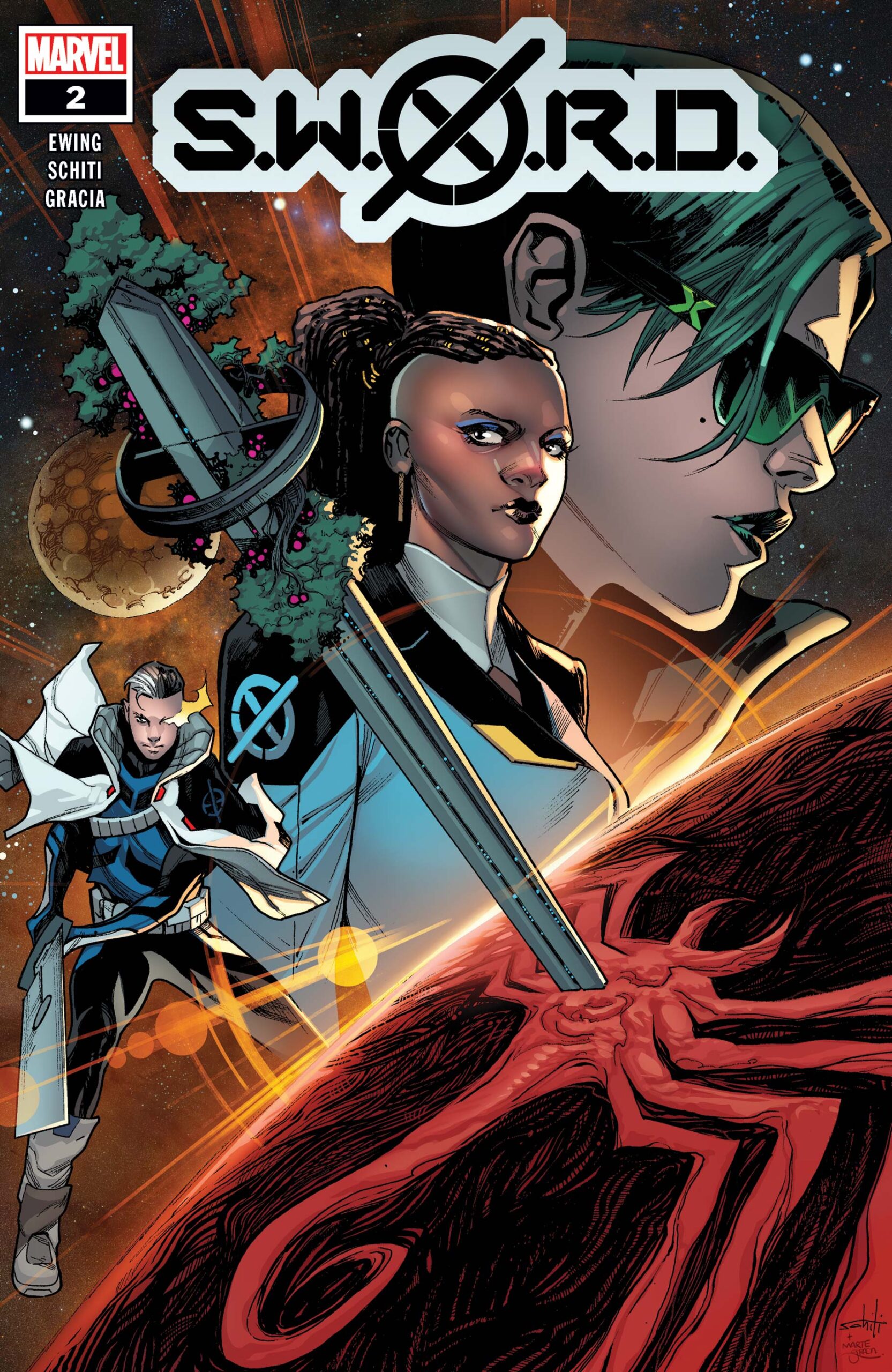 In just two issues, Al Ewing and Valerio Schiti have shown that S.W.O.R.D. is one of Marvel Comics’ best books right now. They have a unique team of fascinating characters, and this second issue highlights two of the most interesting members of the team.

S.W.O.R.D. #2 is available at your local comic book store now! Spoilers below!

Writer: Al Ewing
Penciler: Valerio Schiti
Cover Artist: Valerio Schiti
WHAT IS PROTOCOL V? The S.W.O.R.D. station is thrown in at the deep end of a planetary crisis as Krakoa battles the KING IN BLACK! While a cross-division team take on latex dragons from outer space, Abigail Brand prepares a deniable operation all her own. What is PROTOCOL V – and can the Earth survive it?

After an intriguing debut issue, Al Ewing and Valerio Schiti’s S.W.O.R.D. series turns its attention to the current major Marvel Comics event, King in Black. With Earth enveloped by Knull’s Klyntar material, we get the unique perspective from the outside via S.W.O.R.D.’s space station. S.W.O.R.D. director Abigail Brand and her team realize that their portal is probably the only way in and out of earth and plans a reconnaissance mission into Krakoa to get a lay of the land.

Two of the most interesting members of the team get the spotlight this issue, Marvin Flumm aka Mentallo, and Fabian Cortez. I love that such an important organization has to rely on two unreliable characters. They’re both written really well and steal every scene they’re in. Cortez in particular is a character that obviously will cause trouble for Brand and I’m looking forward to the moment that boils over.

Jonathan Hickman’s wildly popular X run set the tone for every X book and extended X book on the shelves right now, and justifiably so. However, one of his narrative devices that I don’t particularly enjoy is the long pages of text describing characters or backgrounds outside of the actual comic story. The X books are so dense with plot that it’s understandable, but that device is implemented in this book and I wish it wasn’t. The book also uses the frequently aggravating tactic of redacting key words in those pages of text to conjure up mystery. I believe comics should show, not tell, and reading pages full of text with redacted blocks isn’t really my preferred way of reading a comic story.

Criminally underutilized Sunfire gets some shine in this issue! One of the few Asian mutants, Sunfire has been around since 1970 but is often overlooked. In this issue, Sunfire and Cortez share a great moment that showed how cool of a character Sunfire can be. I hope we get to see more of him in this book and beyond.