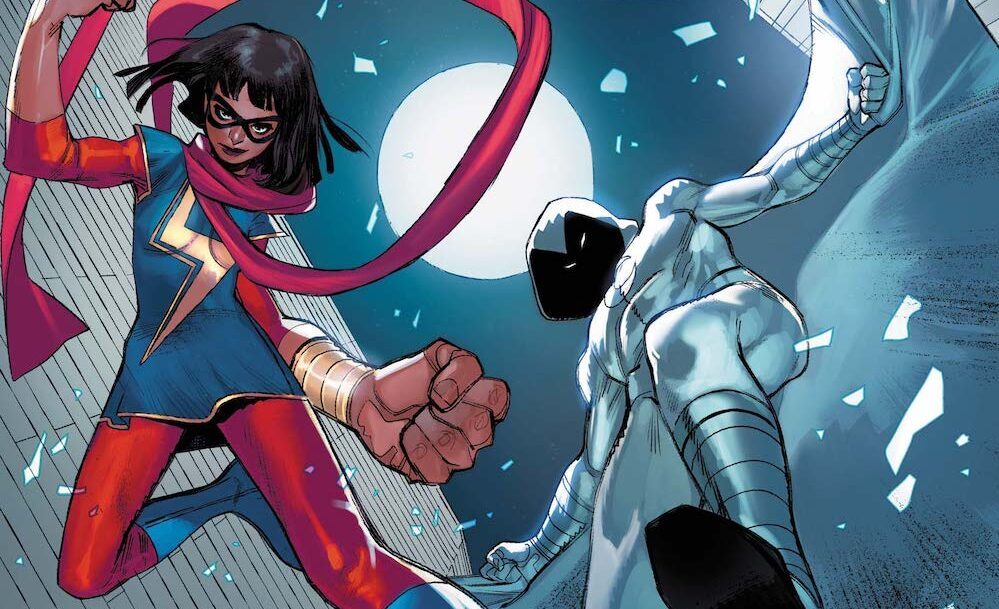 I’m thrilled that Ms. Marvel continues to appear in the comics. Ms. Marvel and Moon Knight #1 is a blend of horror motifs and humour, which nicely reflects both characters, and it’s action packed too! So if you’re coming in from just watching the Disney+ shows Moon Knight and Ms. Marvel, you might want to check this out.

Writer: Jody Houser
Penciler: Ibraim Roberson
Colourist: Erick Arciniega
Letterer: vc’s Travis Lanham
Cover Artists: Sara Pichelli and Federico Blee
THE FIST OF KHONSHU MEETS THE EMBIGGENED FIST OF MS. MARVEL! MARC SPECTOR, A.K.A. MOON KNIGHT, protects the travelers of night…but what about those traveling to bring him death? A mechanical (and maniacal!) threat brings MS. MARVEL into Moon Knight’s orbit, and the gravity of what they uncover will require them to plumb the depths of life and death! The mystery teased in last month’s team-up with WOLVERINE continues to unfurl as the super hero spectacle of the summer sizzles on!

REVIEW – Humor and Horror Team-Up for This One Shot

One thing that stands out in this one shot is how horror and humour is used with respect to each character so that their personalities contrast in just the right amount. Jody Houser’s writing and plotting does a fun job of connecting Ms. Marvel and Moon Knight. The hook or start of the comic captured my attention because it felt like the start of a horror movie. Echoing back to ol’ school spooky movies, a woman runs into a dead end alley due to a suspicious noise behind her. A scream breaks the night and Moon Knight appears on the scene. Cliches are used to capture our attention like how a monster movie would. This was later echoed by Ms. Marvel’s inner monologue: “This totally isn’t how a horror movie would start,” Ms. Marvel says sarcastically as she and Moon Knight are entering a dark and spooky apartment building. Combined with Ms. Marvel’s attempts at making small talk with Moon Knight, her learning vampires are real and Reese laughing in the background, the blend of horror and humour makes for a fun read because we’re seeing how these two superheroes work together despite different personalities.

Ms. Marvel is one of my favourite characters so I appreciate how her sharp eye and problem solving expertise are central to this story, while her voice retains those witty remarks, awkward catchphrases and tones of sarcasm. That really brought the humour element out to balance out the action. Houser’s writing also had some call backs to the original story arc of Ms. Marvel (2014). The tiny robot mice rushing at Ms. Marvel and Moonshot got me thinking back to when Kamala was trying to save Bruno’s brother, Vick. It’s a nice touch! On top of that, we still see how Ms. Marvel feels a bit of imposter syndrome, but overcomes it by sticking to her expertise and experience of working with other superheroes. This isn’t her first run!

Like I said earlier, this one shot is action packed. Ibraim Roberson’s art style and panelling does a clear job of conveying movement and combat. There are certain panels where if the word bubbles disappeared, based on body language alone, you could read along well enough to know what’s happening. Ms. Marvel’s polymorph powers are really put to use in this story, and the visual representation of her abilities, again, contrasts well against Moon Knight’s combat style. While I personally prefer a more animated artistic style for Ms. Marvel stories, I think Roberson’s style helps in evoking the narrative tone and style of Moon Knight and the horror genre. So again, it is a balance between the two characters. Combined with Erick Arciniega’s colouring and colour palette, and the use of shadows, it really hits home that this neighbourhood is Moon Knight’s.

Overall, this was a quick and fun one shot! Most of the time, I really enjoy an action packed story. However, this time around, given the tones and genres at play, I wish the pacing of the story was a bit slower. It would have been great if there was a bit more suspense or tension as Moon Knight and Ms. Marvel investigated the source of the tiny robots, especially because the opening hook is quite suspenseful.