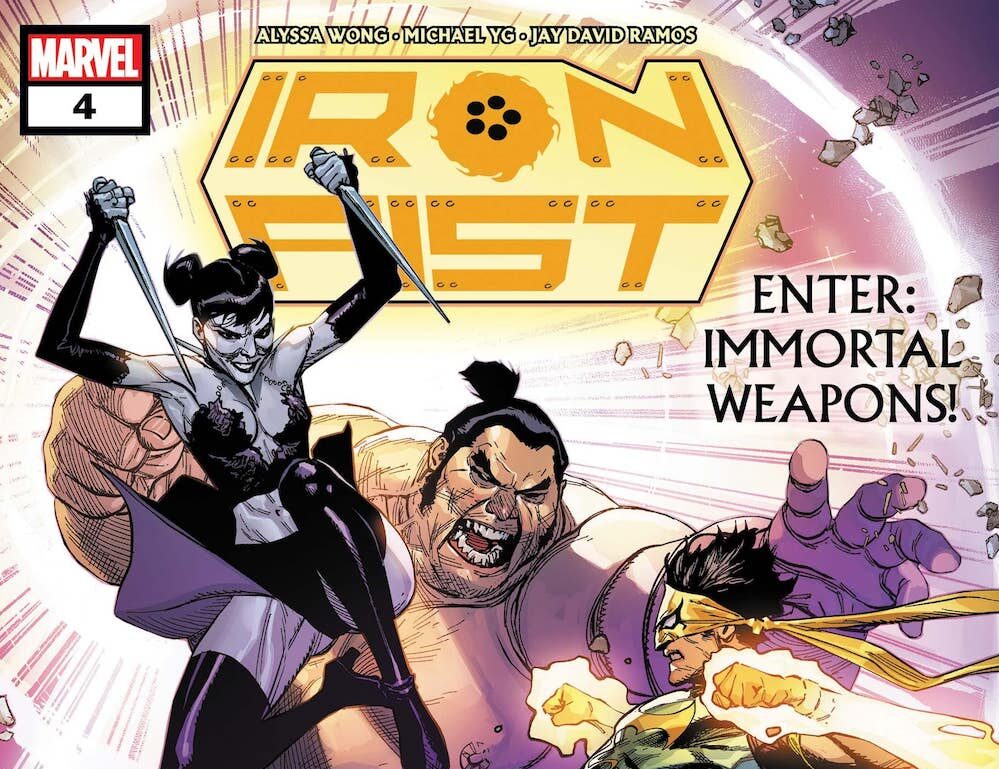 Each issue of Iron Fist issue so far has included dynamic action scenes, and issue #4 really delivers on that spectacularly. While Lin Lei is still struggling with his powers, he thinks fast on his feet. My eyes were dancing across the page through this issue.

Iron Fist #4 is action packed from start to finish. Michael YG and Sean Chen’s work really shines here. Combined with Jay David Ramos’ colours, the scenes look energetic and very dynamic. This is why I’m looking forward to seeing the double page spread of Fat Cobra’s attack on Lin Lei in print. The panelling used to organize the fight sequences are a lot of fun to read because it adds details and tension to when Lin Lei fights back or bounces back on his feet. The contrasting use of smaller panels leading up to larger panels not only draws my eyes to read carefully, but it makes the larger panels really stand out in terms of forwarding narrative plot points.

And just when you think this one issue is only going to focus on Lin Lei’s combat with Fat Cobra and the Bride of Nine Spiders, the plot further thickens with Danny Rand revealed as the reason behind the appearance of the Immortal Weapons, and Luke Cage is on the scene too. I’m curious to know what will happen when the previous Iron Fist reunites with the current holder of the mantle. Their last encounter ended on a bit of a cliffhanger. But more importantly, Lin Lei’s older brother, Lin Feng, is also on the scene, collecting sacred weapons. Storywise, there are more character relations to come.

Wuxia genre themes are becoming more prominent as this run continues. Not only is our hero travelling with friends and allies like Mei Min and Yang Yi, but there were parts of the combat that echoed Chinese Kung-fu dramas, as well as the classic theme of how our hero is trying to live up to a code. I love and appreciate how Alyssa Wong’s writing is gradually incorporating more and more of these elements into the story.

Despite how action packed this issue is, it felt more like a filler issue. Iron Fist #4 is setting up towards a larger plot point ahead. And so, while it is very entertaining and fun to read, the ending, in which the brothers come face to face, is definitely signalling more to come. I also want to note, I’m personally hesitant or weary of the Immortal Weapons because the amalgamation of East Asian cultural codes feels essentializing. Maybe that’s potentially the point given the context of Seven Capital Cities of Heaven, and the greater lore of the Iron Fist, and I also recognize that the Immortal Weapons were originally introduced in Marvel Comics in 2007 by Ed Brubaker, Matt Fraction and David Aja. I think this is why as this run continues, I’m appreciating how the story engages with wuxia genre themes and tropes because it acknowledges and pays homage to cultural context and nuance, whilst still balancing the fantastical elements of superhero comics.