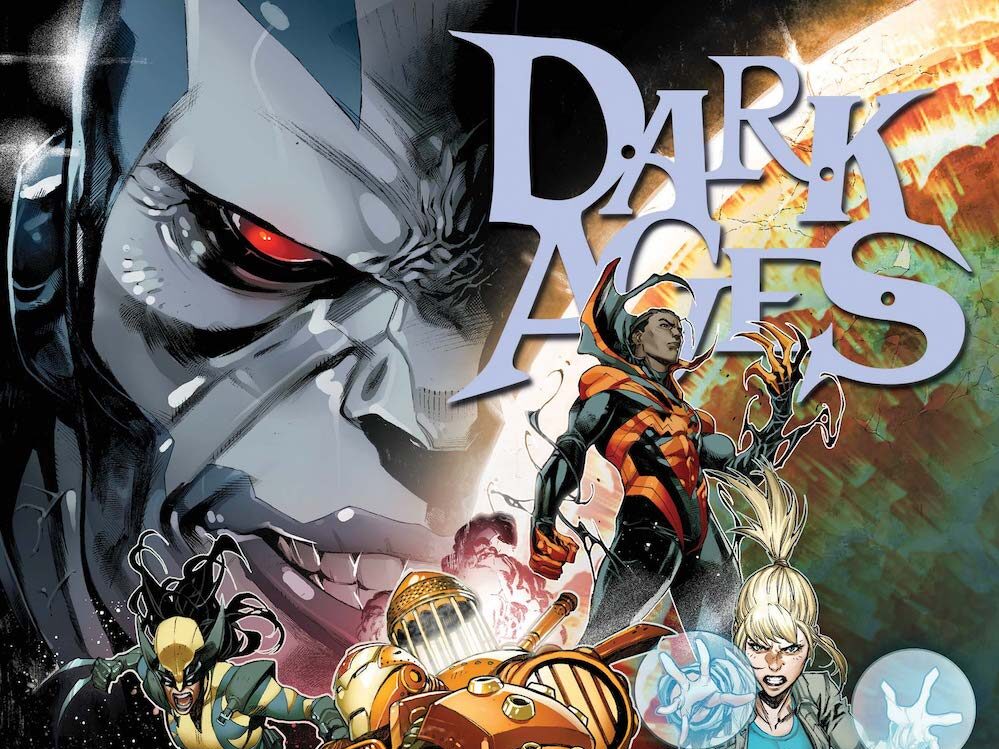 Imagine taking every major superhero and villain across Marvel and having them as an ensemble in a post-apocalyptic world. What do you think would happen? This is the starting premise of Dark Ages. In an effort to stop the Unmaker, a new big bad, from awakening and destroying the Earth, Dr. Strange opened a portal for E.M.P. waves. Unfortunately, things didn’t go as planned when Strange was killed, which left the portal open. As a result, it caused the world to lose all electricity. In Dark Ages #2, we get to see the world seven years later, and how many of the heroes and villains of Marvel have coped and survived.

Dark Ages #2 is available now at your local comic book shop! Spoilers below!

Writer: Tom Taylor
Penciler: Iban Coello
Cover Artist: Iban Coello and Frank D’Armata
It has been years since the age of technology ended in a single moment, like a switch had been flicked to off for an entire planet. Now Earth’s heroes attempt to bring humanity together in the darkness. X-Men and Avengers, vigilantes and villains all work together to create something better. But something darker than the night is descending on the world. Our postapocalyptic world is about to face Apocalypse.

REVIEW – Things Were Going Too Well

Seven years after an apocalyptic event, it looks like Earth not only survived, but is also thriving. Humanity seems to have adjusted to the major shifts and learning curves of living without electricity. Tom Talyor’s writing goes into presenting a world that has become something of a utopia. Personally, I’m always skeptical when a utopia makes an appearance. This makes for quite the foreshadowing, because if things are too good to be true, something is up! The plot twist comes in just towards the end of the issue when you think Captain America/Steve Rogers betrays Iron Man/Tony Stark. Turns out, while things in what-was-formerly North America worked out well, in Europe, it’s another story!

In terms of just enjoyment, I found Dark Ages #2 to be a lot more fun and interesting. I think Iban Coello’s art style captures the tone of the story really well, especially as the story takes a dystopic turn of events. In particular, there’s one panel of Spider-Man/Peter Parker in a side profile, and it’s clear from his facial features how he’s aged quite a bit in the seven years. These details definitely help show how time has passed. Brian Reber’s colouring and Joe Sabino’ lettering help establish the tone in world building and narration too. Some may not like this, but I really liked how so many characters were included in just this one issue. Happy to see Wolverine/Laura Kenny/X-23, Ms. Marvel and Shang-Chi make appearances, even Deadpool has a quick quip. Most of the time when there are so many characters in a comic, I get overwhelmed, but thus far, character appearances and places within the plot are working out well.

While Dark Ages #1 felt very much like a set up, issue 2 gives readers more to see and uncover. There are vampires and werewolves too! And as it turns out, some heroes have been captured and are being held against their will by Apocalypse. The plot certainly takes a deeper dive at this cliffhanger, so I’m curious to see where this series is headed.